ToolGuyd > Hand Tools > Electrical Tools > Klein Breaker Finder is Identical to the Hi-Tech HTP-6 Circuit Detective
Happy New Year!
If you buy something through our links, ToolGuyd might earn an affiliate commission. 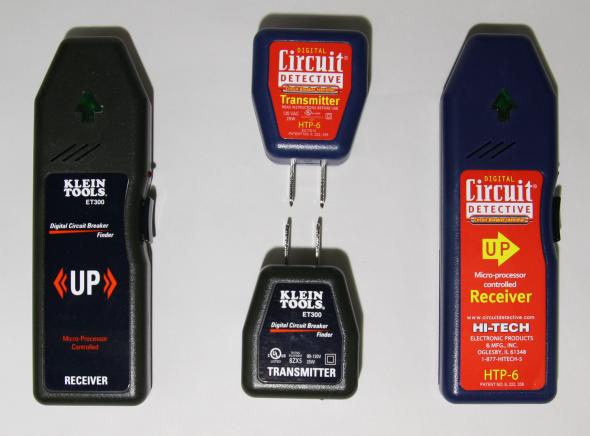 In my review of the Klein ET300 Digital Circuit Breaker Finder I posted a few weeks ago, Ray commented that the Klein product looked very similar to one sold by Harbor Freight. After looking at the photo of the Harbor Freight Circuit Detective, I was pretty convinced that they had a common origin, but the only way to find out for sure was to buy one and take both tools apart.

I went to the nearest Harbor Freight to pick up the HTP-6 Circuit Detective. They have it listed for $40, but seems like it is perpetually on sale for $19. After using a 20% off coupon I only paid $16.27 after tax.

Once I got the Harbor Freight device in my hands, I could see right away that the devices were identical on the outside except for the color of the plastic. The Circuit Detective sold by Harbor Freight is actually made by Hi-Tech, an Illinois company that says right on their website that they manufacture “private label” products for other customers.

Given that the two Circuit Breaker Finders look identical, that’s a pretty good clue that the Klein ET300 is actually made by Hi-Tech, but let’s take a closer look. 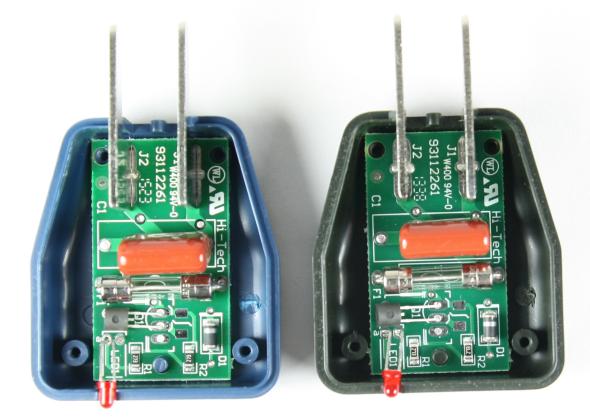 Satisfied that the HF Circuit Detective actually worked, I took both the Klein and the HF transmitters apart. Both circuit boards appeared to be identical, will all of the part numbers seeming to match up.

There really isn’t much to the transmitter. At first I thought it was an RC oscillator, but after reading the patent number given by the Circuit Detective label, I found out that the “transmitter” actually produces current spikes by charging a capacitor. 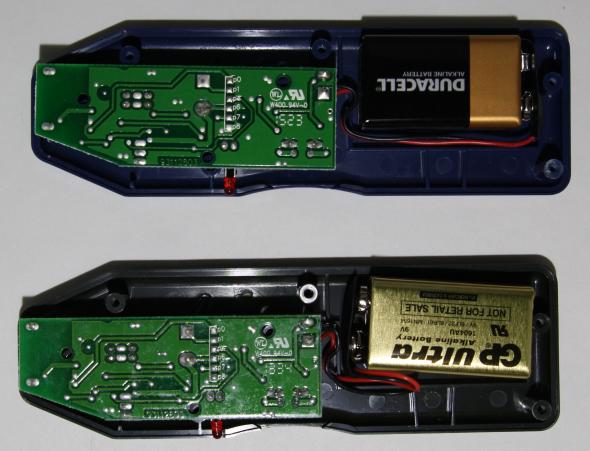 Since the transmitters turned out to be identical, I didn’t have much doubt that the receivers would be the same. In the interest of being thorough, I removed the five screws holding the backs on and again found identical circuit boards. 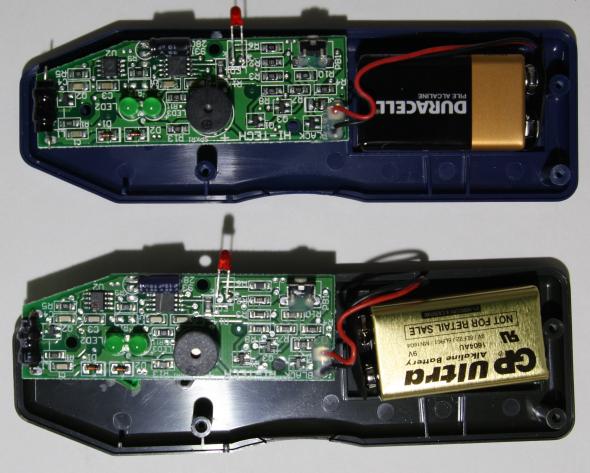 I flipped the boards over to get a look at the front side… yep, still identical. Being an electrical engineer that works with micro-controllers, I noticed right away they are using a Microchip PIC 12C508A, a low cost 8-bit micro-controller that would have plenty of power for this application.

If you looked at the above pictures closely, you’ll notice all four circuit boards say “HI-TECH,” a dead give-away as to who is manufacturing the products.

It is very common for a company to source components, circuit boards, or even entire tools from an OEM, rather than developing their own at substantial cost and time investment.

We’re guessing that, similar to other tool brands, Klein has sourced the breaker finder from an OEM in order to broaden their product offerings.

Even though the circuit boards are all the same, Klein does a few things to differentiate their breaker finder from the other.

First, the Circuit Detective didn’t come with a 9V battery pre-installed like the Klein ET300. It’s a small thing, but it was nice to have the Klein working right out of the box. I didn’t have to go out and buy a 9V battery, or search around for a #0 Phillips bit to install the battery.

The next thing is that Klein sells their Digital Circuit Breaker Finder with a removable rubber boot to protect the receiver. In my review, I found that the boot was more trouble than it was worth, but if you are carrying the receiver in your pouch day in and day out, it might save it from damage.

Lastly, Klein is a name brand that electricians trust, and they will fully support their product. If you told or showed your clients or colleagues that you used your tools from Harbor Freight, you might not get the respect you deserve. It sounds shallow, but appearances matter to some.

*Note: Hi-Tech also sells a 280V version of the Digital Circuit Detective on their website.