ToolGuyd > Flashlights & Worklights > Kobalt Hypercoil LED Flashlight Review
If you buy something through our links, ToolGuyd might earn an affiliate commission. 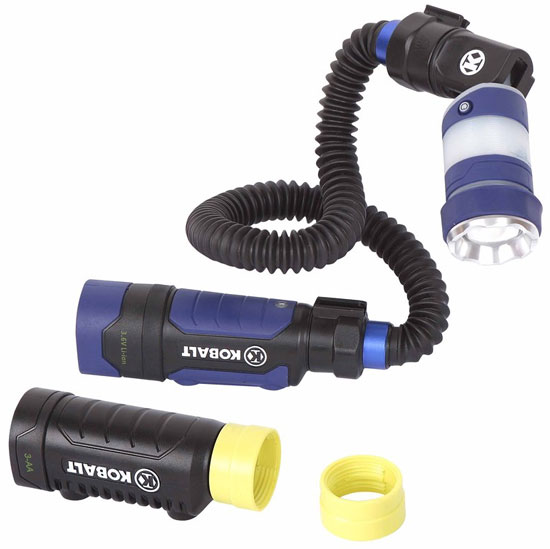 Last week we spoke a little about the new Kobalt Hypercoil LED work light, a new flexible-neck work light that’s available at Lowes. I have a soft spot for innovative flashlights and worklights, and so I picked one up to see if it’s as innovative as Kobalt claims.

Also Consider: Black & Decker SnakeLight, which is $40 via Amazon

Right now the Hypercoil LED worklight is priced at $30 at Lowes (Buy Now). There is also a limited edition kit that comes with a free bonus pouch, but it’s not yet available (Check Availability).

One thing I didn’t know when I wrote up the introductory preview post was that the flexible neck is removable, which makes the completely modular Hypercoil LED work light even more versatile than I realized.

The first five minutes I spent testing the Kobalt Hypercoil LED work light were full of optimism and delight.

My initial assessment was that the Hypercoil LED light is versatile and rife with ingenuity, but also somewhat cheaply made to a tolerable extent.

The main part of Kobalt’s Hypercoil LED work light is of course the flexible neck. By itself, the rubber accordian-covered flexible arm works quite well.

But in contrast to the Black & Decker SnakeLight that we reviewed just the other day, the Hypercoil’s coil left something to be desired.

Without cutting the coil open, it feels like the internal flexible component is a solid and continuous flex arm. This means that adjusting its positioning is not as quick or easy as with the SnakeLight, which is presumed to be built with a modular Loc-Line-like hose with segments that can rotate and flex independently of each other.

This is not to say that adjusting the Hypercoil is tedious or a hassle, but that the SnakeLight is simply engineered with a better flexible neck. 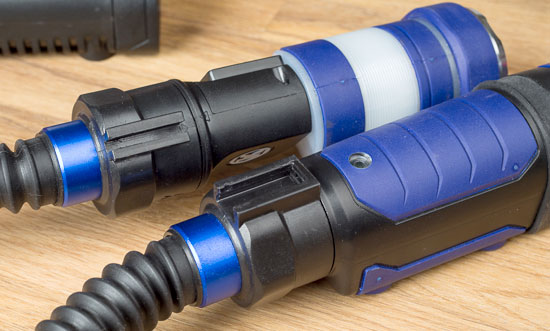 Attaching the flashlight module end of the Hypercoil’s coil to the battery pack end is accomplished with a sliding connection.

The two ends are tricky to attach and detach the first few times, but you get used to it quickly. The advantage of this type of connection is that it’s very secure and helps keep the Hypercoil LED light in a compact configuration for storage or use. 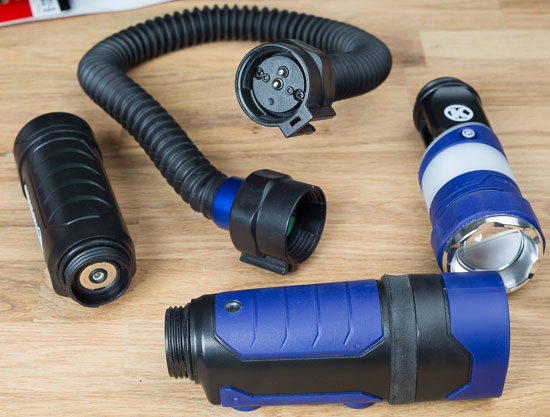 The modularity of the Hypercoil LED work light gives you a lot of flexibility in how you use it. In addition to the choice between using the rechargeable battery pack and AA battery pack, you can choose to use or remove the flexible arm. 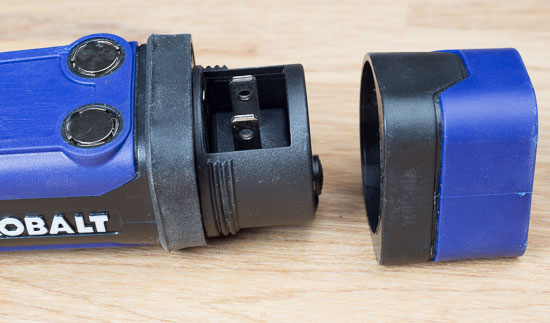 To recharge the 3.6V Li-ion battery pack, unscrew the cap to reveal the AC plug. 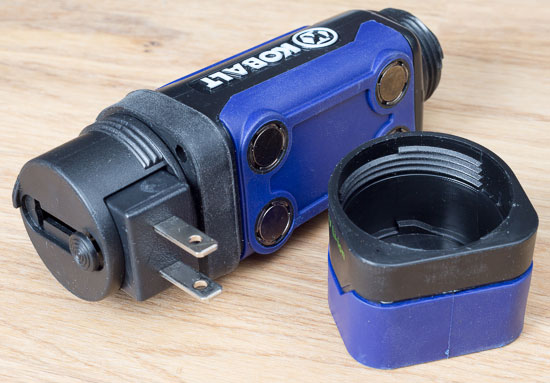 Slide it out, and it’s ready to be plugged directly into a wall outlet or power strip.

The 3xAA power pack unscrews in the same way to reveal a removable battery holder.

I might be nitpicking here, but the AA battery pack gave me a distinct sense of cheapness. It wasn’t one aspect in particular, but little things here and there, such as the flimsy battery holder and sloppiness of the formed plastic above the threads. I suppose that I would rather tolerate a dip in quality of the AA battery pack I probably won’t use, than the with rechargeable battery pack. 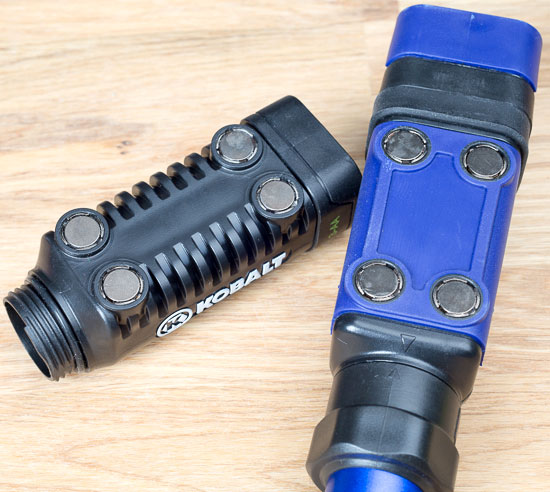 Both battery packs are built with a flat 4-magnet base for easy attachment to iron or steel surfaces and materials. I shouldn’t be surprised by this, but the magnetic bases are strong enough to support the weight of the Hypercoil work light.

If the flexible neck proves to be too bulky, unwieldy, or large for a given lighting task or application, simply remove it.

The kit comes with two yellow-green rings, although you only need one. These female-threaded rings directly bridge the LED light module to either of the battery power packs to create handheld flashlight. 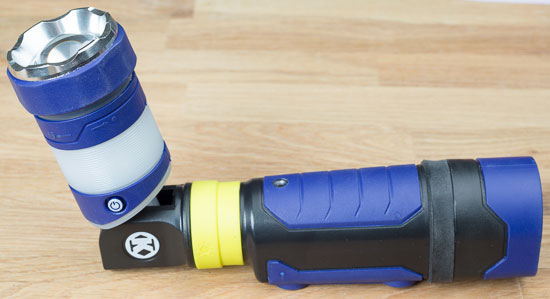 Remember, the LED module still pivots, so the flashlight is still somewhat adjustable. 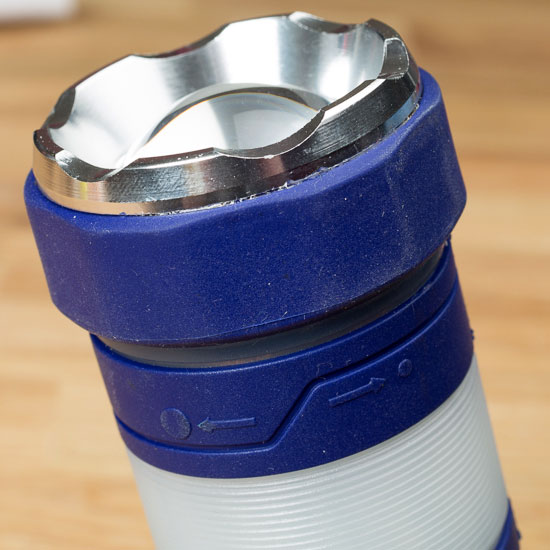 The flashlight module features a focusing dial, a large crystal-clear lens, and a crenellated front edge. I don’t care for the crenellations, but it’s a design aspect that probably didn’t cost anything extra to implement.

I tried to capture how the LED emitter moves forward and backwards with respect to the lens for focusing, but it didn’t show up too well in photos.

Luckily, images of the beam turned out a bit better. The same exposure was used for all three photos, so the differences in brightness intensity should be reasonably accurate. 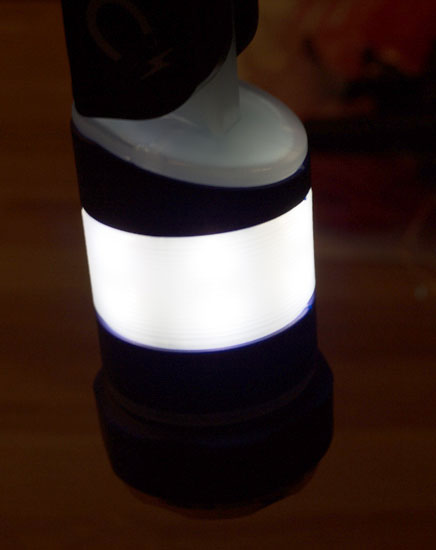 The power button, which also changes the current operating mode with subsequent clicks, is small and located just near the pivot on one side of the LED flashlight module. I wish this was placed on the battery pack for more intuitive operation, but I suppose that would have resulted in greater costs given that the kit comes with two battery packs. 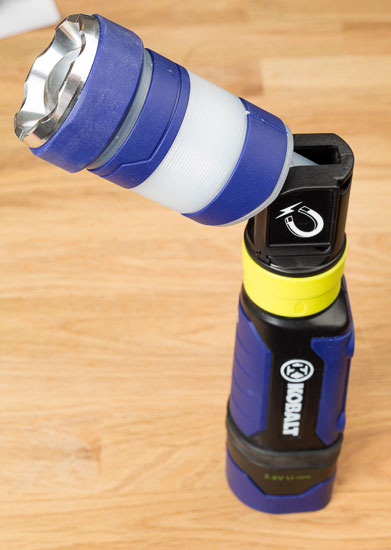 Overall, I’m not terribly impressed with the Kobalt Hypercoil LED work light, but I’m not offended by it either. I found it to be exceptionally versatile and convenient to use.

Despite the few downsides, I think this is a very practical and recommendable product. The modular construction was a great idea, and its execution was flawless.

I purchased the Hypercoil featured here for the full retail price of $30 plus tax at Lowes, which definitely seems fair for what you get.

If you want to step up to a better quality flexible-neck work light, check out the Black & Decker SnakeLight, which is priced at $40 via Amazon.

I gave the work light a rating of 16/20. (1) design point was docked because parts of the light seemed clumsy, such as the sliding coupler that mates both ends of the flexible neck to each other. (2) build quality points were deducted because the Hypercoil has a somewhat cheap feel to it. I was tempted to take off another point for quality, but the Hypercoil doesn’t largely feel weak or fragile. It also does have a 6-foot impact resistance rating. (1) performance point was lost because the flexible neck can be a little unwieldy at times.