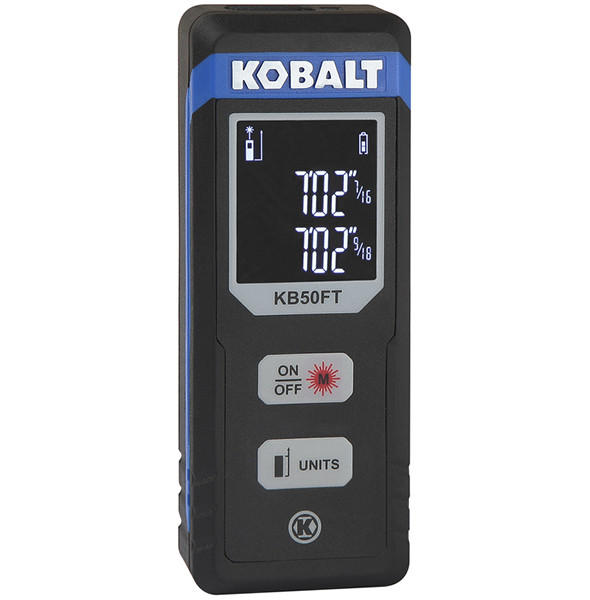 Kobalt has just come out with a new laser distance measuring tool, KB50FT, which features a 50-foot range, inverted backlit display, top and bottom reference edges, and both SAE and metric measurement units. Its accuracy is ±1/8″.

There are two things about the new Kobalt laser distance measurer that surprise me: the inverted display, and the price.

There’s also the $29 price, which is extremely low. 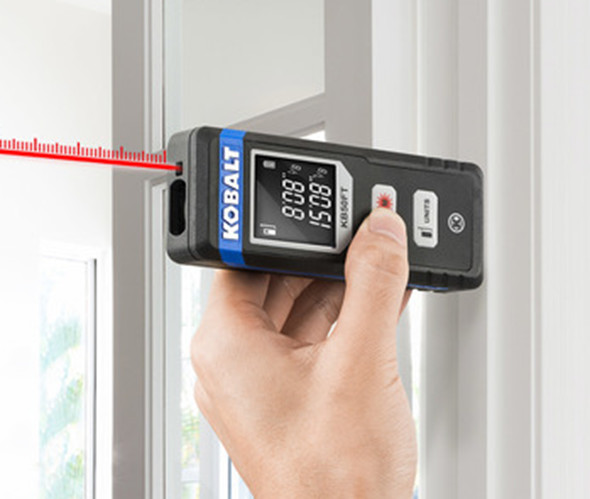 It doesn’t look like the Kobalt laser distance measuring tool will any smallest-in-class awards, but it looks pretty compact and pocketable to me. Lowes.com only gives a single dimension specification: a width of 1.73″.

You’ll want the unit set to use the rear edge as a reference point much of the time, but there might be applications where you prefer to shift it to the front of the tool. You can’t do that with other compact and no-frills laser distance measuring tools, such as the aforementioned Bosch models.

The display shows you 2 measurements – the previous measurement, and the current measurement. This is common for laser distance measuring tools.

There’s an on-screen battery fuel gauge, and the device automatically turns off after 3 minutes if it’s not being used. One set of 2x AAA batteries can last for around 2,500 single measurements. Real-world battery life will likely be reduced with longer LCD use.

The manual (PDF) warns that difficult lighting or measurement conditions, such as use in bright sunlight or when measuring off of poorly reflecting or rough surfaces, will reduce the measurement range and accuracy. This should be true for all tools of this type.

The Kobalt laster distance measurer has a resolution of 1/16″, or 1 mm in metric mode, and 2″ is around the smallest distance it can measure.

I am extremely hesitant of inexpensive instruments that cost significantly less than name-brand and usual-brand products, but the Kobalt name gives me a little more confidence. Besides, if it’s a flop, you should be able to tell right away, or at least early enough to be able to return it to Lowes.

Comparing it to the Bosch GLM 15, which Amazon’s product page says is being replaced by the GLM 20, the Kobalt laser distance measurer has a few extra features and a fancier display. The GLM 20 also has a backlight, but a usual positive display and higher price tag – $50 vs $29.

A 50 foot laser distance measurer is incredibly handy for indoors measurements, such as measuring room dimensions. It won’t replace your tape measure, but it’ll greatly complement it.

I can’t tell if this is being released by Lowes as a holiday season item, or as a permanent part of their Kobalt layout and measuring tools lineup.

Either way, if I didn’t already have a couple of Bosch lasers at different feature levels, I’d be on top of this in no time.

As of the time if this posting, the new Kobalt laser measurer isn’t available yet, but I expect that to change soon.