ToolGuyd > News > There’s a New Kobalt Tools Store on Amazon??
If you buy something through our links, ToolGuyd might earn an affiliate commission. 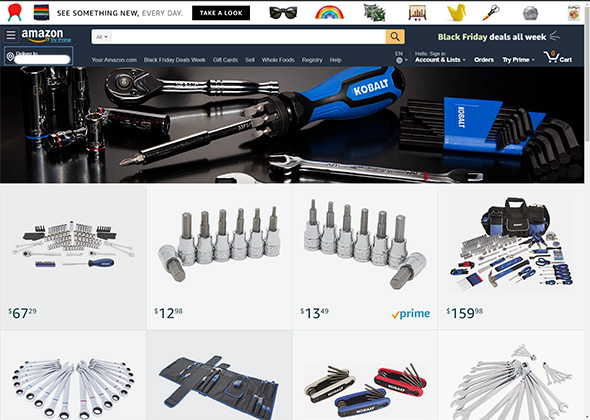 It was brought to my attention that there’s a new Kobalt Tools storefront on Amazon, where a seller called Kobalt Tools is selling Kobalt tools. Thanks to E for the heads-up!

Here’s a Kobalt 138pc mechanics tool set at Lowes, priced on sale for $99. Here’s the same set (but with a different model number) at Amazon, also priced at $99. Model numbers do match up with other cross-listed products.

So far, it looks like only Kobalt hand tools are being sold at the Amazon storefront. But all of those listings, from what I can tell, are for current products (as opposed to clearanced or liquidated models).

A few months ago there were reports that Craftsman tools were superseding Kobalt tools at Lowes. I wrote about why I didn’t think this was really happening. Since then, there have been more reports of Craftsman tools taking the place of Kobalt tools at Lowes stores, but I still haven’t seen this happening at my local Lowes stores. That could mean that it’s happening, but just not here, at least not yet.

Kobalt Tools is a Lowes private label, or house brand, meaning it’s a Lowes-exclusive brand of hand tools, power tools, tool storage, and other tool-related products. You typically don’t see private label brands sold outside of their exclusive retailers, except by special arrangement, such as how Craftsman tools were sold at Ace Hardware even before Sears sold the brand to Stanley Black & Decker, and by third party sellers.

This is very unusual, and I’m not sure what it means. I had emailed our Lowes and Kobalt contact asking about this, but have not heard back.