ToolGuyd > Fasteners > Lee Valley Double-Headed Picture Screws, and Similar Products
If you buy something through our links, ToolGuyd might earn an affiliate commission.

When looking at some of Lee Valley’s new tools and hardware, I noticed their new “best ever” picture screw.

These screws are designed to screw into plaster (and maybe drywall?), and have large diameter screws with thin threads for a secure and snug hold against the wall. The 3/8″ wide inner head, or flange, stops the screw from being pulled into the wall, and leaves a short section of shaft and another head protruding outwards.

The inner head gives you a consistent space for hanging picture wire and other fixtures off of, and also prevents the screw from loosening when weight pulls down on it — up to 20 lbs per screw. The die-cast zinc alloy screws have a #2 square drive and are zinc plated. They also appear to have a self-drilling tip.

The “best ever” picture screw reminded me of a type of nail I’ve seen that has two heads – one that stops the nail from going in further and one that sticks out about 1/2″. Not remembering what they were called, I did an image search on types of nails and found out that they were called double head nails, duplex nails (that rings a bell), or scaffold nails.

They are used on temporary structures, like scaffolding, and the second head protrudes from the surface, making it easy to pull or pry out when it’s time to take the structure apart. But I also seem to remember them being used to hang tools on my grandparents’ farm when I was a kid.

Do a search for “scaffold nail” or “duplex nail” and you’ll find a ton of sources, or you can pick them up just about anywhere that sells nails. 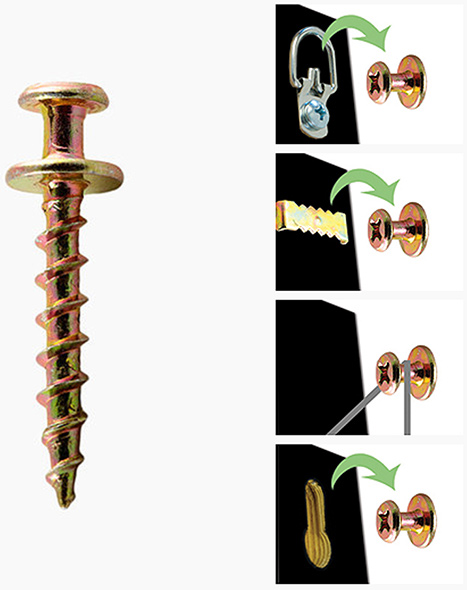 When looking into double headed nails, I discovered that the “best ever” picture screws aren’t the first double headed screws on the market. Hangman products sells a very similar screw called the Bear Claw.

The Bear Claw screws are designed for hanging saw tooth hangers, D-rings, keyholes, wire, and probably other similar hardware that’s meant to be supported by a screw head.

Bear Claw hangers can be driven directly into drywall, plaster, or better yet a stud, but they also work with plastic anchors if you need to hold more weight. These are touted as actually having a self-drilling tip that doesn’t requite a pilot hole to be drilled.

The Bear Claw screws are a probably a better deal, as you can buy a 50-pack for $15 at Amazon — unless you can’t stand Philips head screws.