ToolGuyd > Power Tools > Cordless > Los Gatos Power’s Adapters Connect Your Cordless Tools to AC Power for Longer Runtime
If you buy something through our links, ToolGuyd might earn an affiliate commission. 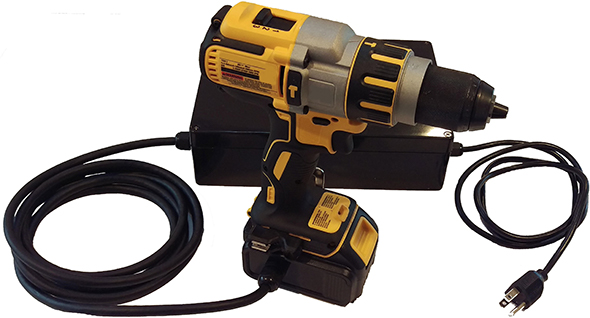 I received an email from Los Gatos Power, but it was somewhat vague, directing me to their website for more info.

I don’t like it when companies email in without telling me a thing about their products, but I was curious and clicked the link. What I found was that Los Gatos Power produces cordless power tool AC power adapters.

That’s right, they make adapter packs that connect to your cordless tools, essentially turning them into AC-powered corded tools for longer runtime.

Right now there are 2 adapters available – one for Dewalt 20V Max power tools, and one for Makita 18V, and a Milwaukee M18 adapter is said to be in the works. 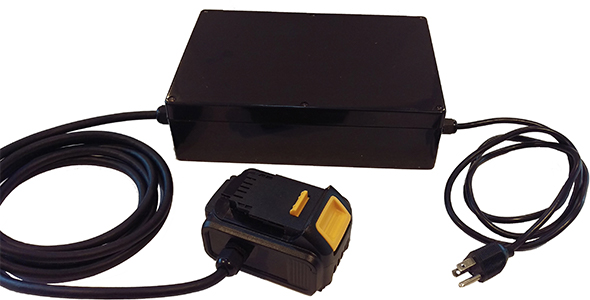 This is something that readers have asked about a number of times now. Why don’t brands make power adapters that allow you to plug a cordless tool into a generator or wall outlet?

I believe there to be 2 reasons, maybe more. First, cordless tools offer cordless convenience. Most users buy cordless tools because they don’t want to be tethered to a power outlet. A corded tool adapter would defeat a major selling point of cordless tools. Second, there’s cost and potential inconveniences tied to the size and weight of an adapter that could serve in place of Li-ion cells.

These adapters aren’t cheap. For the same price, you could probably buy 2-4 high capacity battery packs.

But, they’re also not very expensive. Given the AC power supply prices I have seen, $250 for a high power AC to DC converter of this kind, plus whatever electronics are in that battery box, could be reasonable.

We checked out the company, and they’re very new, first starting business in Q4 2015.

It’s difficult to tell, but it looks like these could be AC to DC power supplies connected to modified Dewalt 3Ah and Makita 3Ah battery pack housings.

I have been planning to do something like this for a while now, for testing purposes, but I haven’t had the time or incentive to do so yet. It’s also something that I have seen at least one power tool brand do before.

This might actually be a good thing, as it should in theory keep a brand’s safety measures in place, at least assuming the power brick was designed to emulate the performance of an array of Li-ion cells.

I could see this working well if the power brick was designed to trick the battery pack circuitry into thinking that it was a regular battery pack with a bunch of Li-ion cells.

Or maybe everything was gutted from the housing, although I don’t quite think that’s the case here. It would be a lot easier for a new company to build an adapter on top of brands’ perfected battery pack electronics, rather than trying to reverse engineer them.

There are many power tool users who are accustomed to working with the full range of a tetherless cordless tool, and who might find such an adapter appealing. There’s proof in the number of emails and comments from readers asking about such adapters.

But will that appeal change now that a real solution is out there to answer their needs and wants?

Personally, I don’t think that I would ever want to use something like this. But, I also don’t work in a professional environment where I’ll get chewed out if I let something like a drained battery delay me from completing a job.

Is 10 feet long enough, from power brick to tool adapter? It seems that only the AC input cord can be lengthened using an extension cord.

Is it UL rated? If not, that could affect its workplace suitability.

How light (or heavy) is the power converter? And will it easily fit into a contractor-style tool bag?

I’ve got mixed feelings about these products, but I am more optimistic than not. This is a solution that many users have asked about and for, and the price doesn’t seem to be unreasonable.

The company offers a 30-day return policy, minus a $15 restocking fee and shipping costs, which I think will be comforting to users who like the idea of such a cordless-corded power adapter but not the execution.

What are your thoughts?