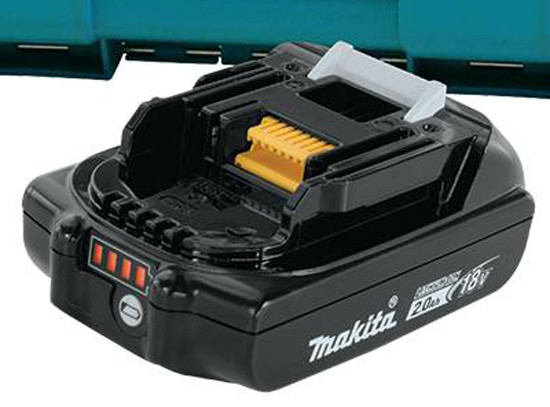 In our recent post, which discussed the sales appearance of Makita’s new 12V Max cordless power tool platform, we talked a little about how the new 12V Li-ion battery packs and how some feature built-in fuel gauges.

A battery fuel gauge is helpful because it allows you to check battery charge status at the press of a button. Some tools have battery gauges instead, but they work in the same way, sometimes requiring a button press as well.

We could never get a straight answer as to why Makita refused to add a fuel gauge to their battery packs, even though each and every competitor offers this feature on most if not all of their battery packs. A frequent response was to point out the faster charging rate of Makita’s batteries and chargers, and how this is a more valued feature.

Yes, Makita’s charger was a class-leader in regard to how fast it could completely recharge a battery pack. That is no longer the case now, as Bosch and Milwaukee have both also come out with rapid chargers.

So why was Makita the only standout when it came to battery packs and built-in fuel gauges? Makita USA couldn’t (wouldn’t?) shed light on this.

One possible explanation that I heard once was that it simply wasn’t a Japanese way of doing things. Makita is a Japanese company, but I have no idea what this means.

In any case, there are signs that change is coming.

First, the new 12V Max Li-ion batteries will feature built-in fuel gauges, at least certain models. And in response to that post, Hector commented with a tip:

He provided a link, and after checking up on that model number for the new XDT11R 18V impact driver kit, I saw that there is a new battery pack – BL1820B. The same battery is included in their XFD10R drill kit as well.

Looking online, there are user manual references to Makita BL1840B and BL1850B battery packs, which would be 4.0Ah and 5.0Ah battery packs respectively, that also feature built-in fuel gauges.

So… battery fuel gauges are coming to Makita 18V battery packs. There’s no indication that all of the different battery pack sizes will be available in the USA, and it’s unclear as to whether these new battery packs will be sold in place of current gauge-less batteries, or alongside them.

This is good news for Makita 18V users, and potentially frustrating news for anyone who wants to buy a new Makita kit or new 18V batteries right now.