ToolGuyd > Power Tools > Cordless > Heads up: Makita Coffee Maker Now Available in the USA
If you buy something through our links, ToolGuyd might earn an affiliate commission. 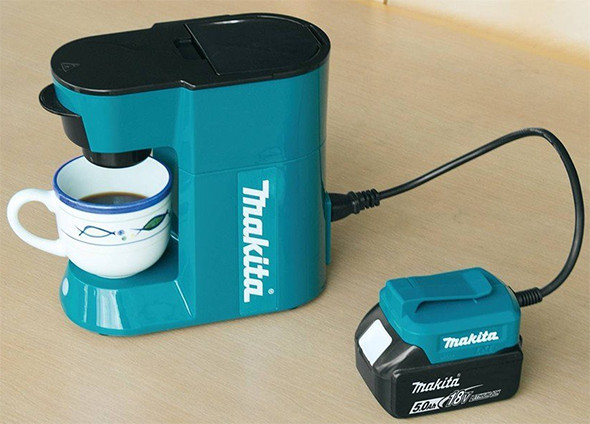 In case you missed it, Makita came out with a cordless coffee maker last year, but like a lot of things, it wasn’t available in the USA. I guess they forgot that Americans drink a lot of coffee, or maybe they wanted to do a test run in a smaller market before bringing it over here. Well, it’s available here now, or at least will be soon!

An AC cord, which doesn’t seem to be included, plugs into the back of the coffee maker in the same way as the DC pack, but to a different port. (Update: In a comment below, Mike says that the user manual mentions an AC cord is included.)

It’s pretty compact, at 8-3/8″ tall, but only has clearance for a 3-1/2″ cup. Makita previously said that the tank holds about 250 ml of water, which is about 8.5 ounces. But the product description mentions times for brewing a 5 oz cup of coffee, suggesting that it has an automatic shutoff. So why the larger tank that cannot fill 2 full 5 oz cups of coffee?

It’s got a permanent drip filter, so your grounds can be poured directly into the coffee maker, and it looks like the filter comes out for cleaning.

Price: $53 and change (as of the time of this posting)

The idea of a cordless coffee maker sounds great! This one doesn’t look particularly jobsite-friendly though. Maybe that’s why Makita was hesitant to bring it to the USA, because it doesn’t really fit their “professional tools” image.

I don’t drink coffee, and have only used a coffee maker maybe once or twice in my life. 7 minutes doesn’t sounds all that bad to brew a cup on cordless battery power. But I think that seeming 5 oz per cup capacity, the cordless brewing capacity, and the 3-1/2″ max height cup capacity are going to be potential downsides and limitations.

No travel mug option? Do workers drink from open cups and containers at jobsites?

But again, I don’t drink coffee. What do you guys think – is this a good gadget or gimmicky gizmo?