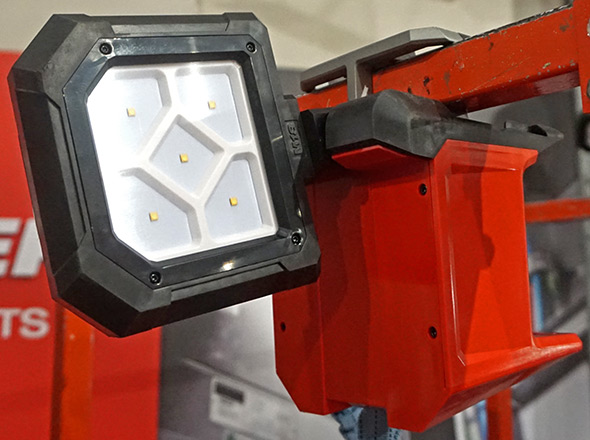 Milwaukee introduced their new M18 Rover magnetic flood light at NPS17. It builds on the strengths of their M12 Rover compact light, featuring a folding and rotating light panel, a larger clamp, and more powerful magnets.

With its 1500 lumen folding and rotating light panel, you can position the light exactly where you need it after you stick or clamp the light in place. This is a huge improvement over the M12 Rover, where you can only aim the light in the needed direction by adjusting where it’s clamped or mounted.

Here are the relevant specs for the M18 Rover magnetic flood light: 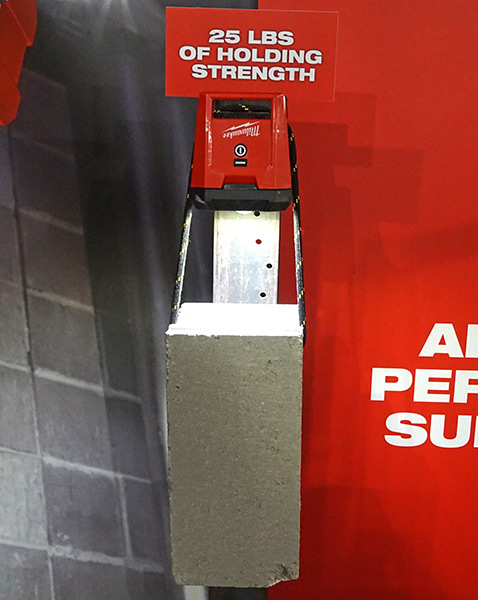 They demonstrated the holding power of the M18 Rover’s magnets by hanging a cinder block off the light while it was attached to a metal surface vertically. While you probably aren’t going to store your cinder block this way, it drives the point home that when you stick the light to a ferromagnetic surface, it’s going to stay there.

If you don’t make use of the magnets, the 2″ spring-loaded clamp can be used to grip a wide variety of materials.

The light has 3 output settings: high, medium, and low. Here’s how the runtime breaks down for each of the settings when it’s paired with a 5.0Ah M18 batttery:

Milwaukee said the light will be available in Q4. They haven’t announced the price yet. 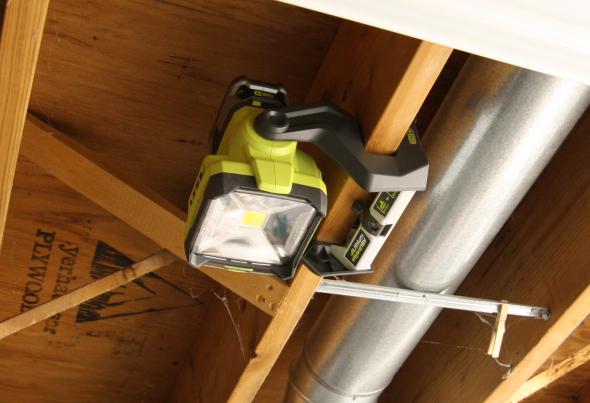 I’m really excited about this light. My favorite general purpose work light has been the Ryobi One+ Dual Power worklight. Even without magnets, its rotating base that doubles as a stud and joist clip allows me to aim light where I need it most of the time. The only issue I have with the light is that it has a slight green/blue tint.

Last year I was hoping the M12 Rover would be just as useful. While it is a nice little light that lasts a long time, I sometimes have issues trying to shine light where I need it. Since the angle of the light is fixed, the only way to adjust the aiming is to reposition the light with its clamp or magnets. 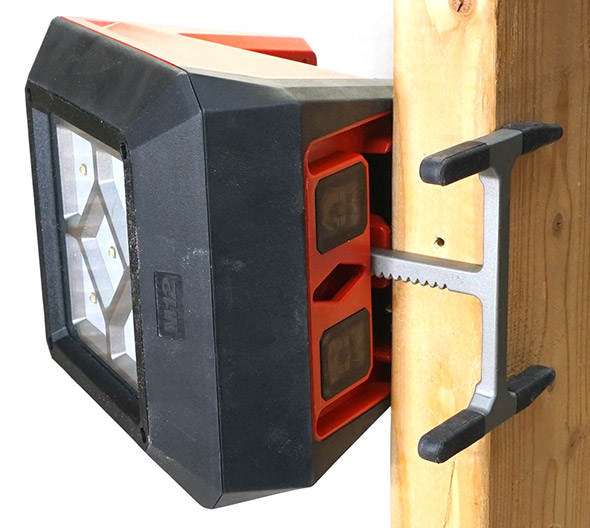 With its new rotating and folding light panel and better color lighting (TrueView), the Milwaukee M18 Rover magnetic flood light will hopefully solve the issues I have with the M12 Rover and the Ryobi One+ worklights. 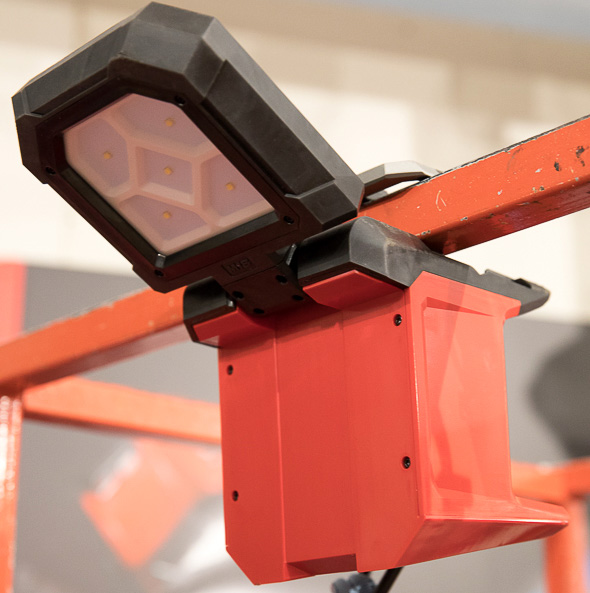 One demo had it attached to steel scaffolding. 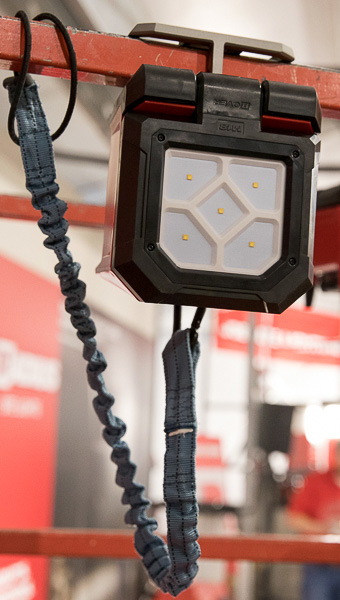 The handle is a convenient attachment point for a tool tether, if using it at height. 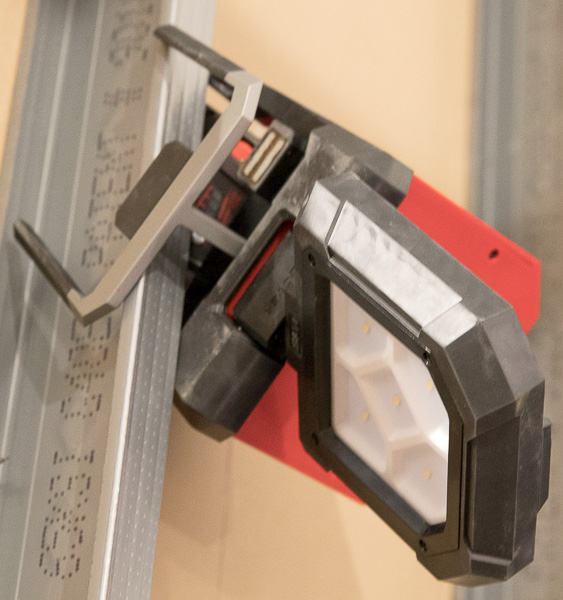 You can still achieve complex positioning with the clamp or magnets. 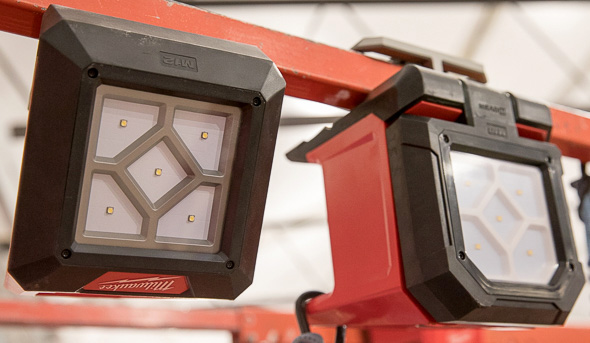 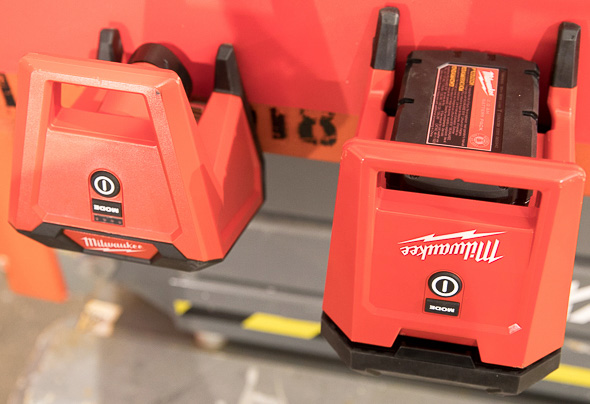 The M18 version is larger, but still reasonably compact and portable. Side by side, its greater magnetic mounting strength is definitely noticeable. Neither worklight slides down under their own weight.