ToolGuyd > News > Misc Tool News, June 2018
If you buy something through our links, ToolGuyd might earn an affiliate commission. 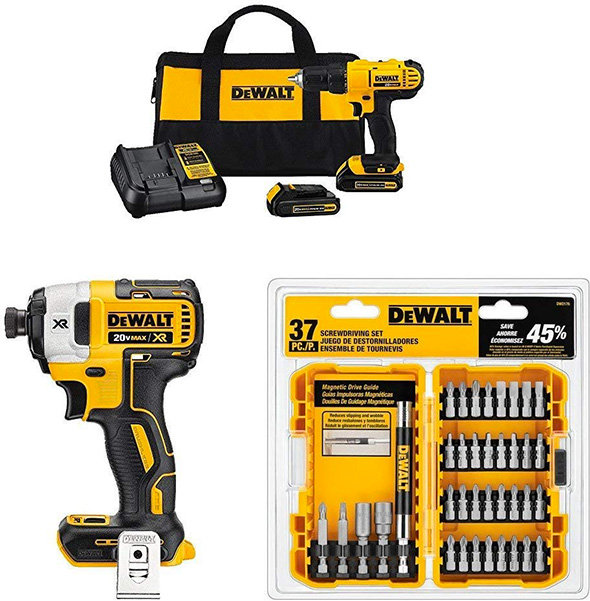 A couple of readers wrote in about today’s Amazon deal of the day, featuring a Dewalt cordless drill kit, bare impact driver, and bit set for a fair price.

The impact driver is Dewalt’s best (excluding the Tool Connect), featuring a brushless motor, 3 speed and torque settings, and great specs. The drill is Dewalt’s cheapest 20V Max model. It’s larger, heavier, and less powerful than the next higher-up models. If I recall correctly, it’s bundled with 1.3Ah batteries.

But, the price is decent, IF you can use the drill kit components and the bit set. I suppose it’s still a good price if you buy everything for just the impact driver. But spending a little more on a DCF887 kit or combo kit might give you a better experience. 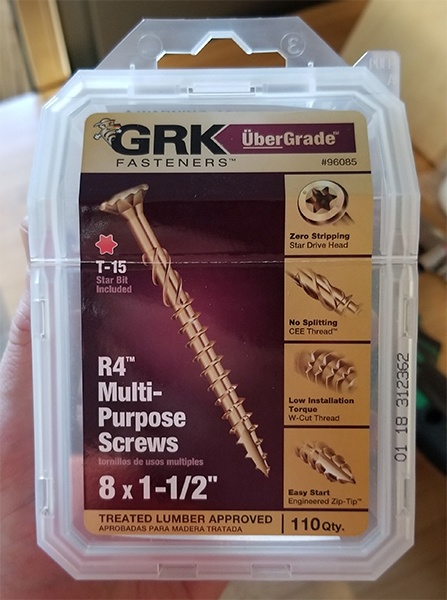 I bought these GRK R4 screws for my recent planter cage project.

I usually like Spax screws, but wanted to try these out. 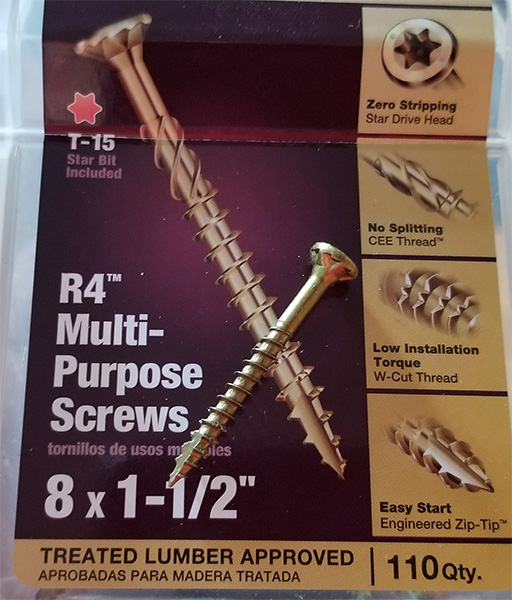 The 8 x 1-1/2″ size lacks the advertised no-splitting thread. The smooth shaft didn’t split my wood, but the head did!

Uch. Spax flathead screws do a good job of creating their own countersink. These didn’t.

I pre-drilled the holes, which helped to reduce – but not eliminate – splitting. I really should have hunted for a countersink, but didn’t want to take the time. I was already late to get in the house for dinner, and it would have been dark before I found one. It also would have been more work, to pre-drill and then countersink. I don’t have all-in-ones, didn’t need them until now.

So… I’m not liking these GRK R4 screws just yet.

They seem like good quality screws, but weren’t as convneient to use as Spax, which hardly (if ever) require pre-drilling, and certainly not in pine! 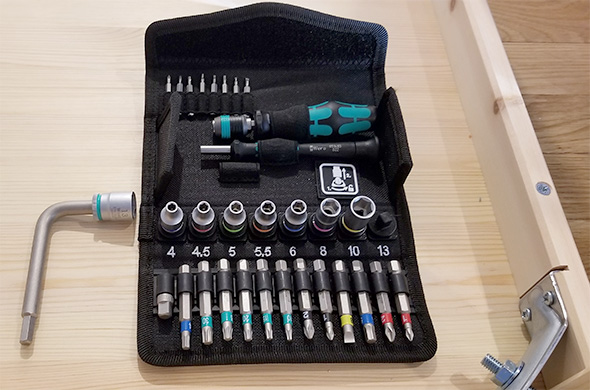 I’ve used the bits and sockets of my Wera 2017 advent calendar tool set (thank you again, KC TOOL!), but this was perhaps the first time I used the included L-wrench in place of a ratchet. I sized out the socket and was too lazy to retrieve a wrench or 1/4″ ratchet.

In case you’re wondering, this is a small kid-sized Ikea side table that was less than the sum of its parts would have been. I’ll build my own when I have a chance, but this one is also part of an experiment that wouldn’t have been worth using good materials for.

Also the table components were made in Sweden. It was either $10 or $20, on clearance a few months ago.

Ah, back to the Wera tools. This year I might buy a couple of Wera advent calendars for friends and family. It sounds bad, but I use my 2016 Wera calendar screwdrivers more than any other these days. The Wera calendars offer big value for not too much money, making them excellent Wera starter tool sets.

While not exactly tool-related… 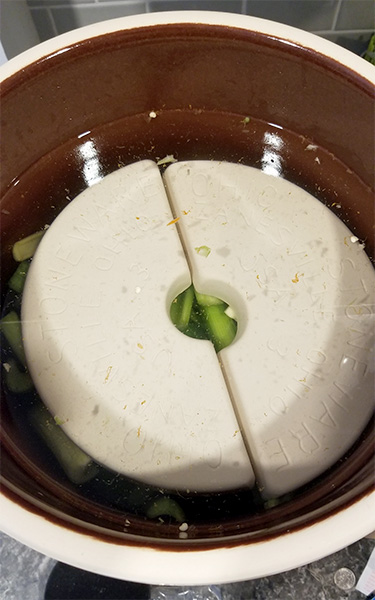 There are lots of things that I’ve been meaning to do as an adult. But there are excuses, obstacles, and road blocks for some of them. Others, indecision and lack of confidence makes me my own obstacle.

My grandfather used to make the BEST pickled veggies. I can still remember the taste of his pickled carrots, celery, and the “juice.” The pickles themselves? He used home-grown cucumbers. The last batch he made was at my parent’s house, and I remember the pickles having too many large seeds for my liking.

My cousin sent me the recipe a few years back. But… Where to get food-grade buckets? Where to put them? My grandfather’s last batch was fermented in my parent’s backyard. Where would I put my buckets?

The couple of times I researched things, I just couldn’t pull the trigger and get started.

Last year, our favored once-a-year pickle vendor sold out of their tasty jalapeno pineapple pickles at the annual spring fair before we could get there. This year, they didn’t show up. So if I want pineapple jalapeno pickles again, I might have to make them myself.

I like some brands’ pickles. But sometimes they’re inconsistent. My son and I got food poisoning from trying a new refrigerated pickle brand once. It was a horrible night.

2 weeks ago, I bought a USA-made stoneware pickling crock. And then I picked up some canning salt and some veggies.

It took a little research and a leap of faith. My grandfather pickled things in a sealed food-grade bucket. Looking online, a covered (but not sealed) open crock is the way to go these days.

Taking some details from the internet, and some from my grandfather’s recipe, I just did it. 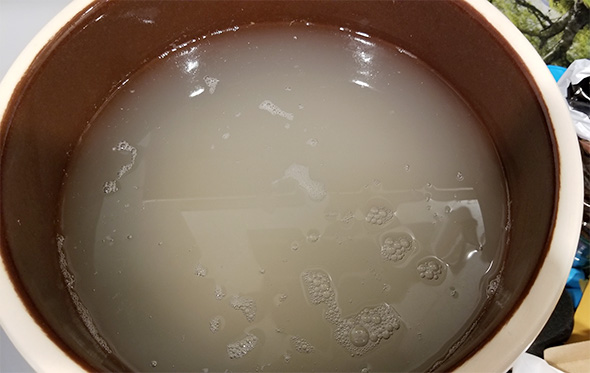 This is what it looks like after 4 days. I think I’ll do a taste test today (day 5). The internet is very vague as to how long the process takes; I’ve seen claims of 4-7 days, as well as 3-4 weeks.

I skimmed normal-looking (as per internet sources) byproduct yeast on Day 2, and things were clear since then.

The bubbles? Carbon dioxide from fermentation.

The batch might be a failure, I won’t know. But I couldn’t fail or succeed if I didn’t try. I also bought some special mason jar lids, for experimenting on a smaller scale.

Maybe in a few months I’ll pick up a small dehydrator to make the beef jerky I’ve always wanted to.

There are other things I’ve been meaning to try. Some obstacles are avoidable, but something like fermentation pickling that requires a little research, not too much money, and planning? I should have found my confidence sooner.

It will take some work before I can reproduce flavors as good or maybe even better than I remember, but this first batch is a big step in getting me on the road there.

There are analogies with tools. How many people let learning curves get in the way of welding? Hand-cut dovetails? Carving?

Sometimes you just have to start something. It won’t always work out, but the only way to move forward is to take that first step. The slower the learning process, the more important this can be.

Lowe’s is Clearing Out Bosch Screwdriver Bits at Some (All??) Stores