ToolGuyd > Books, Magazines, & Videos > New Book by Adam Savage: Every Tool’s a Hammer
If you buy something through our links, ToolGuyd might earn an affiliate commission. 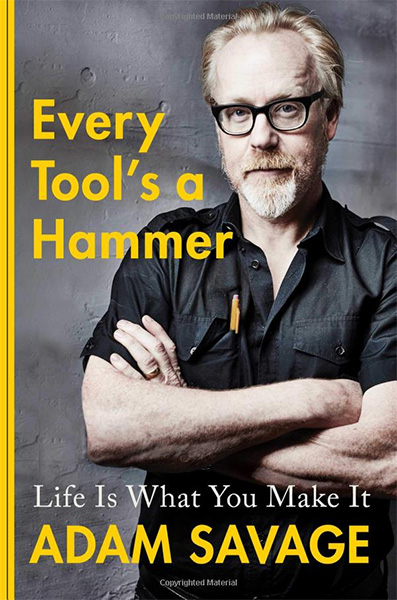 I was ordering some new children’s books for my kids when Amazon made a suggestion for Adam Savage’s new book, Every Tool’s a Hammer: Life is What You Make it.

Adam Savage, known from his time on Mythbusters, Tested, and other such places, is a maker. He comes up with an idea, and a few minutes later, BAM, a crazy awesome prop, costume, or other fabrication.

Even if you don’t care for props, costumes, or whatchamacallits, Adam Savage has delivered great workshop tips and tricks over the years.

For example, he built custom tool stands with the idea that his most-used tools should be quick and easy to access.

I like to think of myself as creative, but I find myself running into roadblocks starting or finishing certain projects.

So, what’s this book about?

Every Tool’s a Hammer is a chronicle of my life as a maker. It’s an exploration of making and of my own productive obsessions, but it’s also a permission slip of sorts from me to you. Permission to grab hold of the things you’re interested in, that fascinate you, and to dive deeper into them to see where they lead you.

The introduction also explain’s the title a little bit:

In Every Tool There Is a Hammer—don’t wait until everything is perfect to begin a project, and if you don’t have the exact right tool for a task, just use whatever’s handy.

Honestly, this is something I sometimes have problems with, although I like to think I’ve been improving.

There are also lessons from others:

The publisher’s sell page offers one more message to readers from the author:

I hope this book inspires you to build, make, invent, explore, and—most of all—enjoy the thrills of being a creator.

I preordered my copy, and it’s set to arrive on Wednesday. I’ll be moving the book to the front of my list. I’ve been meaning to read more, but it’s so hard to get started again. There are a few recent books awaiting my attention, including Marc Spagnuolo’s Essential Joinery, but I think Savage’s book will have to come first.

I’ve looked at Amazon’s “preview” pages, and it seems like an easy read, but also one that’s not too preachy.

What I like about watching Adam Savage’s project “builds” is that he makes it clear that “making” is still a practice for him. Sure, he gets things right and working sooner than many of us could, but you could see the process. I wouldn’t say he’d be okay with things falling apart, but it seems that he’s not afraid of things being imperfect. That’s a mindset I need to work better towards. While Savage’s book might or might not successfully inspire me to better, the preview at least makes it look like an interesting and enjoyable read.

I think it’s going to be a good book.

In addition to hardcover, it’s also available on Kindle, Audiobook, or as an audio CD.