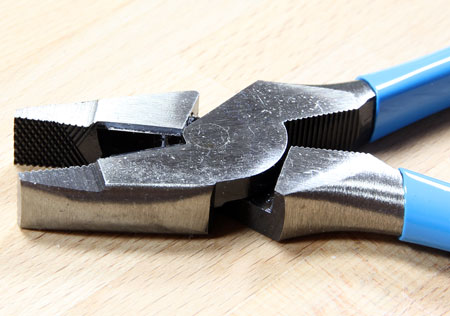 A few months ago, Channellock improved their 369 9-1/2″ high leverage lineman’s pliers by shrinking the pivot rivet and shifting its location closer to the jaw. As we were able to show, there is a measurable difference between the older and updated lineman’s pliers.

The 368 is a slightly more compact 8″ lineman’s pliers, and is the second release to feature the new high-leverage design. Weighing in at less than one pound and measuring 8.38″ in length, the 368 pliers is intended for use in tighter spaces where other common-sized lineman’s pliers are too large to fit comfortably.

Going by tool geometry alone, these high-leverage pliers do in fact provide greater leverage compared to older tool designs. Shrinking the rivet slightly and shifting it closer to the cutting edges does provide a measurable improvement.

In using the pliers, I did notice that I was able to cut cables and wire with less effort than when making the same cut with other lineman’s pliers. Concerned that I was biased by what I new about the improved pivot geometry, I passed a review sample around to a few professional friends and colleagues of mine, along with a larger 369 lineman’s plier. They all liked the pliers, but it wasn’t until they used them to cut tougher materials such as hardened steel and ACSR wires that the improved design showed its advantages.

The bottom line is that Channellock’s new 368 is a very capable lineman plier. I would say that the 369 is still the way to go for heavy-duty repetitive use since its additional length allows for maximum leverage. But if you’re looking for a more compact lineman plier that can still hold its own in any situation, the 368 is a great choice.

I’ve never found a Channellock plier that I didn’t like, and that doesn’t look to be changing. As with their other pliers, the 368 is made in the USA.