ToolGuyd > Power Tools > Cordless > New Metabo Cordless Air Compressor
If you buy something through our links, ToolGuyd might earn an affiliate commission. 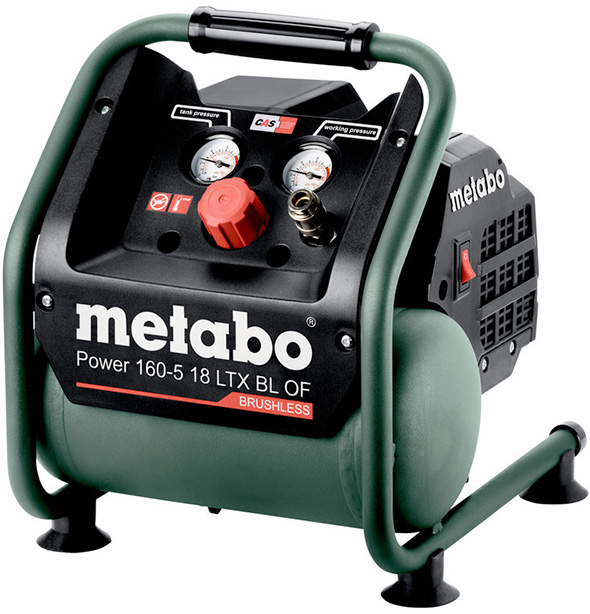 Metabo has come out with a new cordless air compressor, 160-5 18 LTX BL OF. Thank you to everyone who has sent in tips about Metabo’s social media posts featuring the new tool! We have not yet seen any press materials, but there seems to be enough details for a quick discussion. 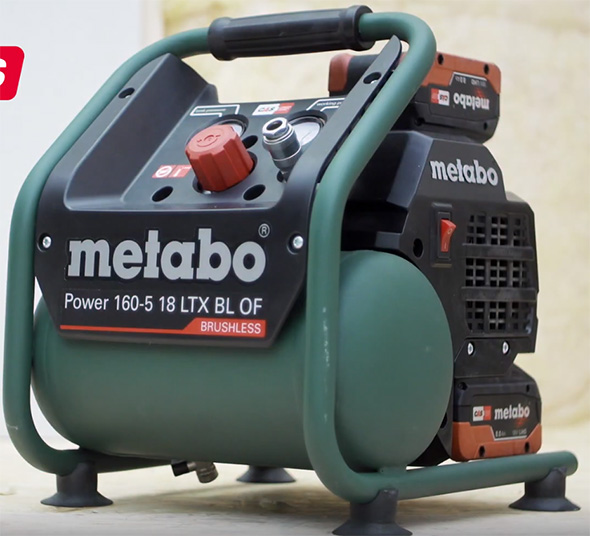 Metabo says that the second battery can be stored directly on the air compressor, but it’s not clear if the “storage port” is a dummy connection or whether the air compressor can automatically switch power between the primary and secondary battery ports once the first battery is depleted. We have seen a similar system on Ridgid’s 18V cordless air compressor.

It has not yet been confirmed whether the new Metabo cordless air compressor will be available in the USA.

The new Metabo cordless air compressor weighs about the same as the Dewalt FlexVolt cordless compressor, reviewed here. However, the Dewalt has a 2.5 gallon tank, which is 92.3% more volume than the Metabo’s 1.3 gallon air tank, and also a higher max pressure, 135 PSI. What this means is that the Metabo holds considerably less air. I should point out that the Dewalt FlexVolt air compressor is a 60V Max cordless power tool, while the new Metabo runs on their 18V Li-ion batteries.

Update: The Metabo weight is 21.8 lbs with a battery, the Dewalt weighs 22 lbs without. Additionally, the Metabo is rated at 0.9 HP, and the Dewalt 0.4 HP. With a more powerful motor and smaller air tank, the Metabo should fill up and refill faster.

Compared to the Ridgid cordless air compressor, the Metabo is heavier but also has a 30% larger air tank (1.3 gal vs. 1.0). The Ridgid has a very slightly higher max pressure (116 vs. 120 PSI). The Ridgid has two battery slots, and can operate with one or two batteries connected.

The idea of “second battery storage” is a good one, although Metabo’s marketing language doesn’t indicate whether it’s an automatic hand-over after the first battery is depleted, or whether you have to swap battery packs manually. Their parts breakdown (PDF) has a wiring diagram that only shows one battery being connected, and their user manual also specifically describes the second battery mount as for storage.

Metabo says this about the second battery storage slot:

Second battery pack can be stored directly at the compressor for work progress without interruption.

While this is a small convenience, an automatic switch-over would be better. It’s still possible that this is a feature, but the marketing language, parts diagram, electrical wiring diagram, and user manual strongly suggest otherwise.

Update 2: Translated Germany language product news says that the new Metabo cordless air compressor can drive more than 1000 nails into softwood per LiHD battery charge (5.5Ah? 8.0Ah?). So, perhaps having a second powered battery slot isn’t quite necessary. If you equip the compressor with a higher capacity battery pack, that secondary battery storage slot perhaps becomes optional, in a “there if you need it, but you might not” kind of way.

It is worth noting that this is only the FOURTH cordless air compressor available, at least that we’re aware of.

Read Also: The Best [and Only] Cordless Air Compressors [so far]

Metabo cordless power tools generally have great build quality, and I would expect no less from their new cordless air compressor.