ToolGuyd > Hand Tools > Nose Syringe Bulbs in my Toolbox?
If you buy something through our links, ToolGuyd might earn an affiliate commission. 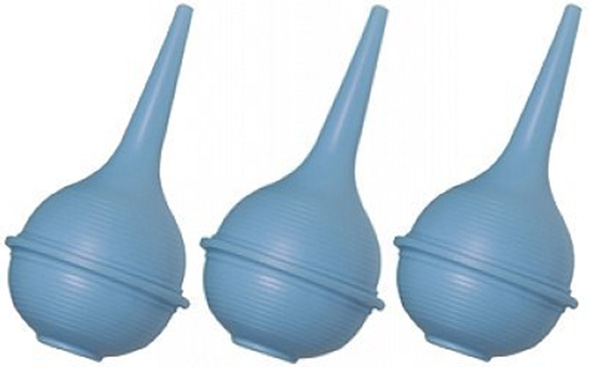 I just received my order for nose syringe bulbs, to replace one that I recently misplaced. Nose syringe bulbs? You might remember them from when you were a kid, or if you’re a parent, you’ll recognize them as part of the after-care kit a newborn gets from the hospital. They’re commonly used to suck mucus out of newborn and infant noses.

You could potentially also use them to blow out holes in masonry material to prep for anchors, but a vacuum works better. There are also specialty blow-out bulbs for this purpose, such as this one by Bosch or this one by Makita, which have straight shafts. The tapered stem of the medical bulb won’t fit long holes well.

I believe it was Brian Goulet who popularized the idea of using an ear/nose bulb syringe for cleaning and flushing out fountain pens.

Pen supply shops have them for about $4 apiece, and I might have paid that for my last bulb, but Amazon’s $5 for 3 pricing seemed better for my resupply this time around.

I found that using a bulb syringe does work great for clearing out fountain pens, and one day it came to mind that I could use it for clearing out a tapped through-hole. I didn’t need to clean the holes out perfectly, I just needed to clear some chips that were sticking in the threads a little, due to the cutting fluid I had used.

It holds ~2 ounces of water. It can also function as a gentle air blower, but there are better products out there for that, such as the Giottos Rocket air blaster.

I’m not saying that you should go out and buy some bulb syringes for your toolbox. But, maybe there will be a time when it’ll be just the thing you need. Until then, shelve the idea at the back of your mind.

As an aside, for those of you with newborns or infants, we used the NoseFrida with great results.