ToolGuyd > Power Tools > Power Tool Accessories > Your Favorite Nut Driver Bits?
If you buy something through our links, ToolGuyd might earn an affiliate commission. 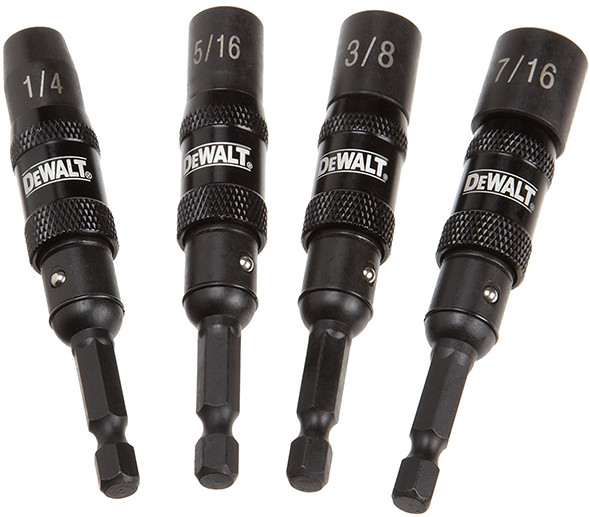 I needed a 7/16″ nut driver. I started by using a bit holder extension, 1/4″ hex to 3/8″ square drive adapter, and a 7/16″ Craftsman impact socket of forgotten origins. It was in my box of spare loose impact-rated bits and accessories. I believe I bought it as a one-off for this exact purpose – impact driver and impact wrench sinking of lag screws – but I just don’t remember.

It kind of worked this time, although not very well.

After sinking a few lags I searched some more, and I found an older 7/16″ impact-rated nut driver. It worked reasonably well.

I bought some Spax 1/4″ lag bolts for another project, and those take a 3/8″ nut driver. A 3/8″ nut driver will be easier to find in my spare bits boxes.

This all brought to mind a question I can’t really answer. Who makes the best nut driver bits?

I was pre-drilling the holes with an impact driver and a Dewalt impact-rated drill bit – a rare pairing for me, but it turned out to work really well – and so I could have probably used a drill instead of the impact to sink the lags.

But driving the lags into scrap studs without any pilot holes? That took a lot more effort. I don’t think I could have done it with a compact drill. A heavy duty drill would have handled the task, but my impact driver tackled it with greater ease.

So to sum it up, I’m curious to hear about which nut driver bits you like using, and what you use it for.

Do you use different nut drivers for Tapcons and other concrete anchors? Lag bolts? Nuts or hex head screws?

Me? I tend to use whatever random nut driver bits were included in the various screwdriver and impact-rated bit sets I’ve bought or received for testing in the past few years.

Are you up to it? Great! Please share your opinions about nut driver bits!

Irwin Unibit Step Drill Bits are Now Made in China?