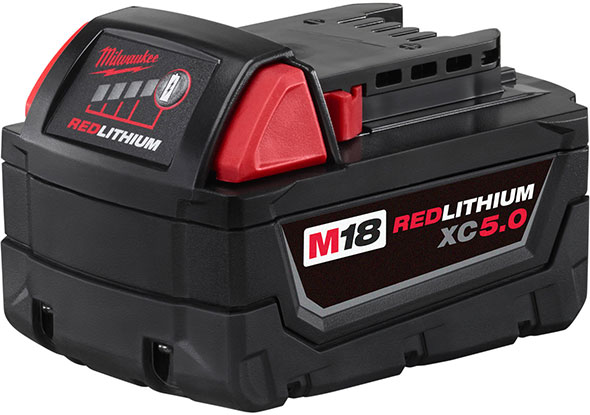 Cordless power tool brands make small changes to their products fairly regularly. Sometimes there might be a bump-up in specs, other times a small manufacturing optimization. Or, there might be a change to improve reliability or reduce assembly mishaps.

What I have learned over the years is that there a lot of of small and often overlooked changes, but they’re meaningful ones, with thought and planning behind them.

I have an M18 battery that’s been here for a while, let’s call it a “test bench battery.” When I have to do some quick testing with a bare tool, or a reader has a quick question, this is the battery I use. It’s an older 5Ah battery.

This battery hasn’t been used for a while, as I’ve been bringing more tools to the bench with their own batteries of other sizes and styles, such as compact, HD, or High Output. I have still been using M18 XC-sized batteries, just not here and not this one.

I was looking at it, and there was a small spot of flaky material crusted on the outside by the terminal.

Corrosion of some kind? Maybe a drip of something? Did one of my kids sneeze on it with focused precision?

It didn’t look like a leakage or corrosion problem to me. But was it coming from inside the battery pack? I wanted to check, so I took it apart.

At this point I should advise that it is not recommended that you disassemble your cordless power tool battery packs for any reason. They’re not user-serviceable and it can be dangerous to open up the battery even if you know what you’re doing. Do NOT do as I did, and if you do, it’s at your own risk. 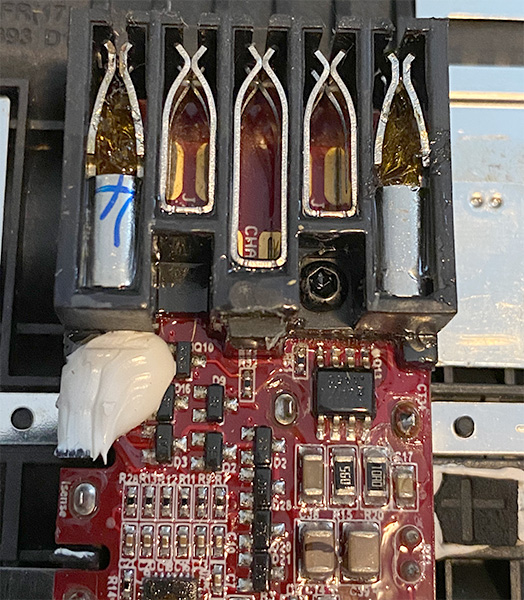 Okay, so that’s interesting – there’s some kind of grease within the power terminals. My guess is that it’s some kind of dielectric or conductive grease for moisture and corrosion resistance.

But, I looked at some other M18 batteries – newer ones – and they didn’t have any such grease.

Why would older batteries have grease within the battery contacts, but not the newer ones?

There are no battery codes – I’m going by the date codes of the injection molding.

I contacted Milwaukee about when the change happened and why, and will report back if I learn anything, although given the nature of the question I can’t expect to receive too many official details.

Milwaukee issued expanded warnings about their M18 HD 9Ah battery back in mid-2017. The batteries I have that pre-date that enhanced warning, which relates to avoiding exposure to conductive or corrosive liquids that can get inside HD 9Ah batteries, had an application of power terminal grease, and batteries from 2018 and later – at the least those I checked – do not have any grease.

Perhaps the tool connection interface was redesigned for better moisture and corrosion protection on the higher capacity HD battery, and then the changes were made to XC batteries as well. 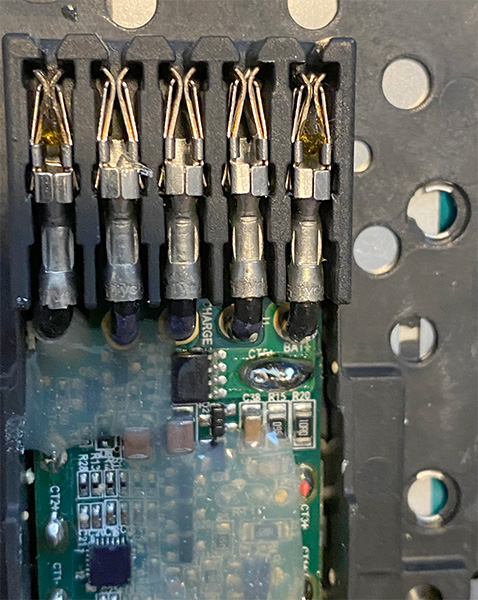 I found this to be the most interesting difference, but it’s also clear that Milwaukee implemented many significant changes when developing their 5Ah battery. 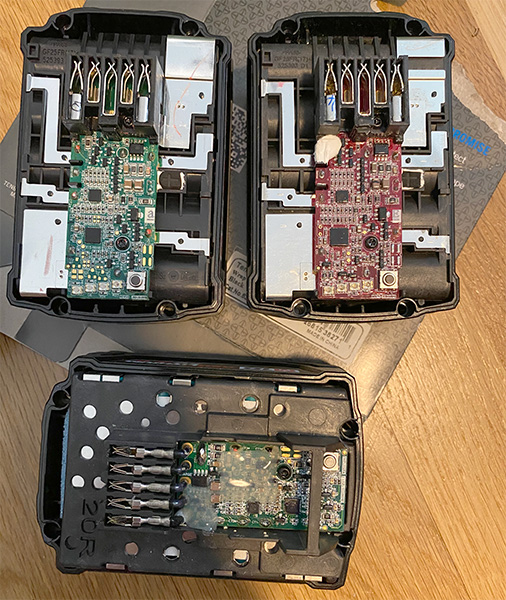 There are some common features, but the M18 XC battery design looks to have been largely redesigned for the launch of the 5Ah battery, or at least between 4Ah and 5Ah releases. Unfortunately, I don’t have enough of a range of batteries to be able to pinpoint when any of the major or minor M18 XC design changes were implemented.

I also can’t tell you what changes or improvements have been made to the current 4Ah batteries, if any, as I don’t have any recent 4Ah batteries to examine. I would assume so, at the least for streamlined parts sourcing and production optimizations, but it’s hard to say without proof or confirmation.

I can see that major changes were implemented between ~2012 and ~2014 (when the Milwaukee M18 5Ah launched), with changes being made to how the cells were housed, and it looks like the updated design has persisted in the years since. 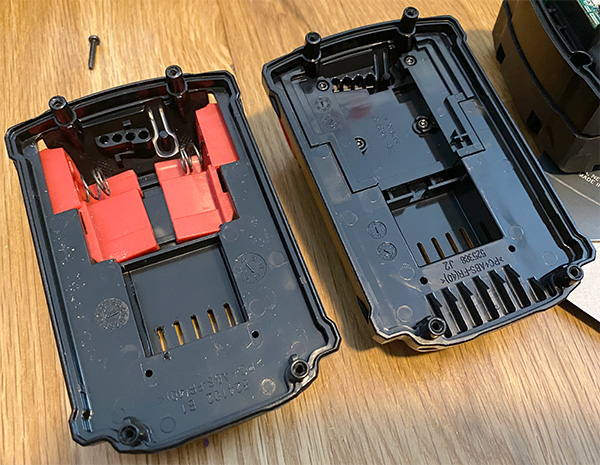 Even the top cap, which house the spring clips that latch M18 batteries to their tools, has been significantly updated.

I find myself wondering what this change was for. It’s easier to reassemble newer M18 batteries than the older ones, but I would presume servicing frequency would be too low for this to be of repair benefit. The newer design looks to require more labor-intensive initial assembly, to lock the clips under its own plastic housing. Perhaps this helps with sealing the battery against moisture or other potential contaminants?

One of these days, I’m going to have to do a full comparative study, piecing together a picture about all the small changes I can observe and uncover.

Answering why any of the changes were made can be elusive. For instance, earlier circuit boards had blobs of clear resin covering some components, while the newer ones look to have thicker lacquer. The 2014 battery had a blob of white potting resin. Why then but not in the 2018 battery?

I hadn’t intended to take this close a look at Milwaukee’s M18 battery pack evolutions – I was only looking to eliminate any chance the odd film outside my battery’s terminal was coming from any of the Li-ion cells within – but this was fun, and I’m looking to learn even more.

This isn’t a full teardown, but I hope you still found it interesting.