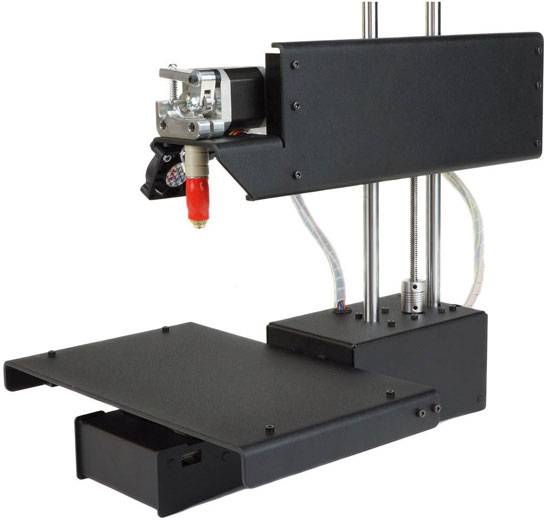 I find the new Simple 3D printer to be highly appealing, and have added it to my shopping list. Of course this means I would need to clear some benchtop space for the printer, a drawer for a roll or two of plastic filament, and part of my schedule to find the time to design and build a fume-extracting enclosure.

Printerbot has as solid reputation as a relatively new 3D printer manufacturer, although I find the documentation on their website to be a little less complete than I would like.

The new Simple printer works with open-source and free software, which could be considered a pro or a con. On the plus side, it means that it works with non-proprietary software that is regularly updated. But on the down side, it means that the Simple 3D printer is not as perfectly beginner-friendly as other brands’ printers, which come with ready-to-go software packages.

Don’t get caught up on how this printer is in some places called a Metal Simple 3D Printer. The metal part is to show that its frame is made from metal and not cut sheets of wood or plastic.

If you’re looking to save some money, there’s a kit version for $539.

Is this the 3D printer that you’ve been waiting for? I don’t know, but it looks good to me.