ToolGuyd > Lights > Work Lights > Project: Magnetic-Mounted LED Light Strips
If you buy something through our links, ToolGuyd might earn an affiliate commission.

After completing a few small projects on top of the Husky 60″ workbench with pegboard I’m currently testing for review, I found the ceiling lights in my garage were inadequate for task lighting. I wanted to find some way to get a nice even source of light onto the bench.

In my search, I found a set of Commercial Electric 600 Lumen linkable LED strips at Home Depot. They come with adhesive tape backing as well as brackets for permanent mounting. Since the bench is a review sample, I don’t want to modify it just yet. I try to keep tool samples in as close to original shape as I can so that I can review the actual product, not my modifications.

These LED strips are said to be for adding accent lighting to any space. The set comes with (4) 12-inch light strips, linking cables, an AC adapter with on/off button, and some mounting hardware. 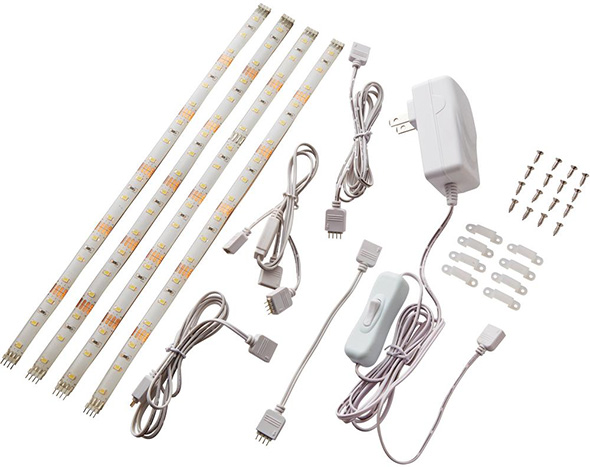 After a little pondering, a light came on in my head. If I mount the LED strips to the metal shelf using some magnetic tape, I can hide the glare from the LEDS and be able to reconfigure the lighting on the fly.

By metal shelf, I mean a ferromagnetic steel shelf. Magnets won’t stick to non-ferrous metals, such as aluminum, and certain types of stainless steel. 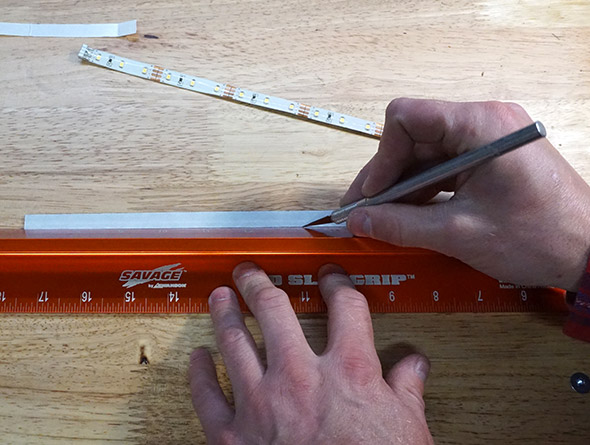 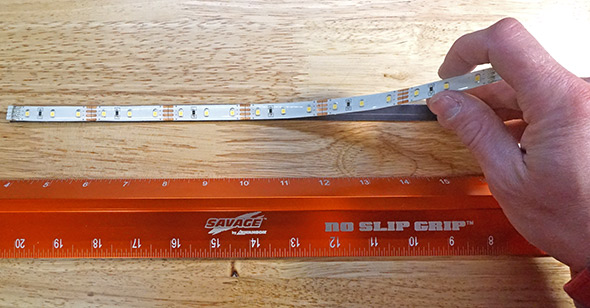 Then I just removed the backing on both the magnetic tape and the LED strip and pressed the sticky sides together. 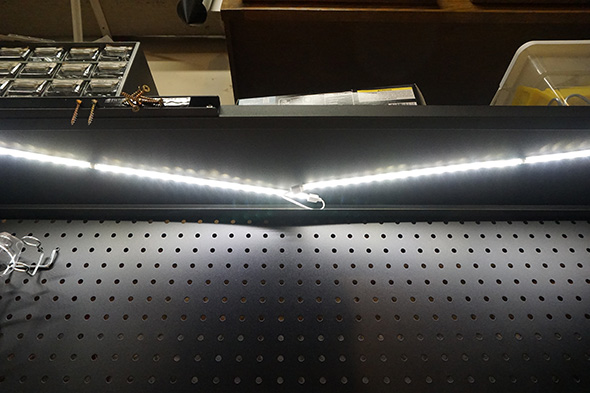 Once I had attached magnets to all of the LED strips, I arranged the LED strips underneath the metal shelf. Since the shelf is 48″ wide and the length of the strip plus the power connector is longer, I had to get creative in my layout under the shelf. I could have cut a few inches off one of the strips, but I would loose some LEDs.

Instead I connected two sets of two strips together and ran them diagonally towards the center, then I used one of the strip connectors that comes with the kit to connect the to strips together.

I put the shelf back on the pegboard and turned the strips on again. The strips put out a total of 600 lumens over their 4 foot length which provide an adequate amount of task lighting. It definitely could be brighter. I could try to find a brighter LED strips, or I could buy a second set and use 8 strips instead of four. But for now it accomplishes what I set out to do.

If you actually had 1/2″ magnetic tape and didn’t care about a little extra magnet hanging off the LED strips, you could save yourself the trouble of having to trim the magnetic tape down to size.

Since these LED strips run off a transformer that outputs 12V, theoretically you might be able to run these strips off of a 12V or even 18V battery so you could use this setup in a shed or a trailer that doesn’t have power, but that’s a project for another day.

Stuart’s Note: Do you want to see more DIY LED workbench or under-cabinet projects like this?