ToolGuyd > Adhesives, Sealants, & Lubes > Recommend a Hot Glue Gun?
If you buy something through our links, ToolGuyd might earn an affiliate commission. 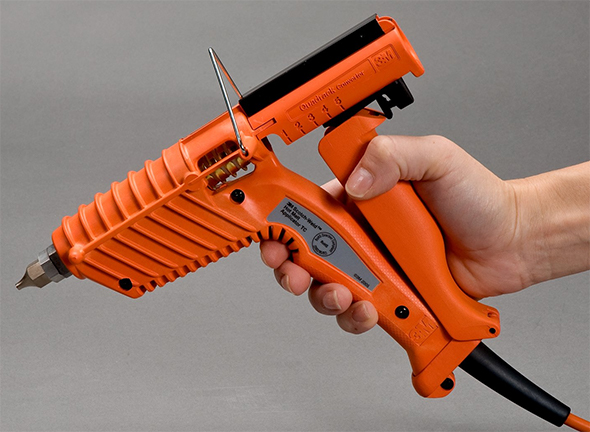 A while ago, Fred mentioned using 3M’s glue gun, and at that time it jumped ahead on my wishlist. It drew my attention earlier, but I dismissed it – $150 for a glue gun?

I started shopping for a new glue gun, and haven’t completely ruled out 3M’s. 3M’s hot glue gun, which they more elegantly name as a hot melt applicator, has some advantages.

The glue sticks for this 3M applicator style have grooves in them, which I imagine makes it easier to control how much glue is applied during use.

This also means that you can’t use any off-the-shelf gluesticks, you have to use 3M’s. 3M, being an adhesives specialist, offers a range of general purpose and special purpose glue sticks. So for specific applications, you might wan to use their glue sticks anyways.

So, assuming this glue gun is leaps and bounds better than lower cost models, there’s the annoyance of being tied into 3M’s system. Finding consumer-friendly glue stick quantities can be a hassle.

Right now, I found two glue stick varieties that could work for me – 3748Q for electronics work, 3792Q for general purpose use on wood and other materials.

But it seems like a whole lot of money for something that will be used often but not everyday.

So… do you have a favorite glue gun you could recommend? What about glue sticks?

I have an Arrow glue gun around here somewhere, but I remember it being very drippy. Before realistically considering the 3M, I looked at the Surebonder Pro2-100. The Surebonder is a lot less expensive.

I’m also curious about Tec glue guns. They look to have some nice features too, and cost a bit less than the 3M. Plus, they look to take standard glue stick sizes.

I’ve also been wondering – if you’ve got a glue gun, what do you use it for?

I intend to use one for fastening electronics in an enclosure where machine screws won’t work, as strain relief for some parts, and to add a stiffener to the bottom of some of the drawers I’m making.

How Would You Fix These Small Drywall and Paint Issues?