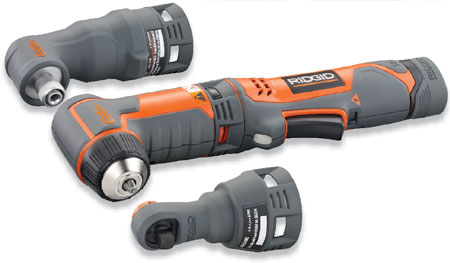 UPDATE: Here’s our review of Ridgid’s new JobMax tools. The page you’re reading now has info on the right angle drill, ratchet, and impact driver, while this page here talks about the autohammer and oscillating multitool.

Yesterday, we posted a bit about Ridgid’s new 12V JobMax cordless tool system, and the first combo set that includes an auto hammer head and an oscillating multi-tool attachment. Well, it turns out that Ridgid is introducing another JobMax combo set, with this one featuring a right angle drill, impact driver, and ratchet attachment!

As of yet, we still don’t know when these new JobMax tools will be released or how much they will cost. We’re very excited about these new tools, and will post updates as soon as we find out more.

Ridgid’s new JobMax lineup falls under their Fuego group of cordless tools, which are described as the fastest, lightest, and most compact in their class. With the new JobMax series, Ridgid may have to add “and most cost efficient” to their claims!

The previously mentioned drill, auto hammer, and oscillating multi-tool JobMax kit should hit stores in early March, and so until we learn better, we’ll assume this this right-angle kit will be released at the same time or shortly thereafter.

Details via Ridgid
Browse or Buy Ridgid JobMax via Home Depot
Credit goes to ToolSnob for breaking the news.