ToolGuyd > New Tools > New Ridgid Pro Tool Boxes
If you buy something through our links, ToolGuyd might earn an affiliate commission. 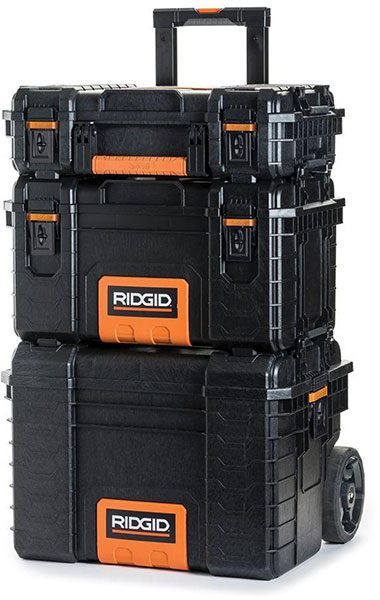 In a somewhat surprising move, Ridgid has come out with their own line of modular and stackable tool boxes!

I’m a big fan of these types of connectable tool cases, and utilize many Bosch L-Boxxes, Dewalt ToughSystem cases, and Festool Systainers to house tools and supplies.

Related: Which are the Best Modular Tool Boxes?

Update: You might also want to check out our review of these Ridgid Pro tool boxes! 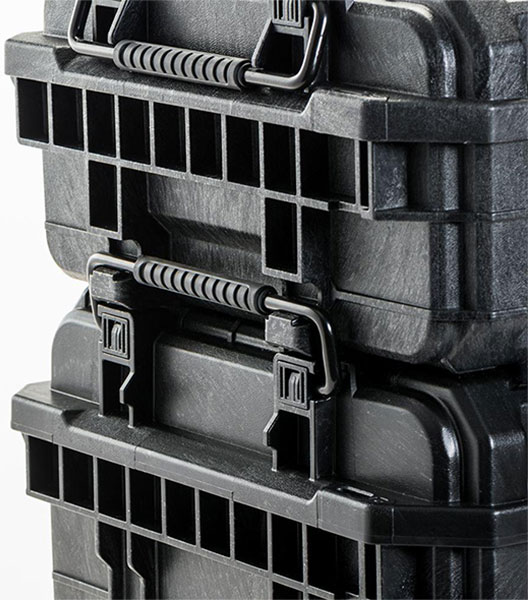 The new Ridgid Pro tool boxes latch together at their sides using metal handle bars. They’re all about 22″ wide and feature tough plastic construction. It looks like these boxes could be made from structural foam, which is a really tough and excellent tool box material, but I won’t know until I see them in person.

There are three sizes of Ridgid Pro tool boxes – a small organizer with removable bins, a mid-sized holds-all type of tool box, and a large tool box with all-terrain wheels and extending handle. There’s also a new 25″ tube-style tool box that isn’t stackable or connectable to the other Pro boxes.

They are also built with an outer seal to prevent water and dust penetration, heavy duty metal latches, padlock loops, and a metal stopper that doesn’t allow the lid to open past 90°. This should help prevent tip-overs when opening empty or lightly loaded boxes.

The Pro organizer is built with a front handle, but lacks a top handle. The tradeoff is that this gives the internal compartments a little extra height. 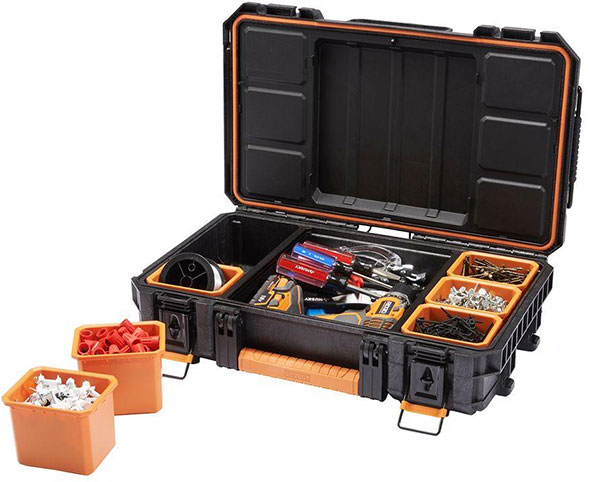 It features two sections for organizing parts and suppliers, and a middle section for hand tool, small power tools, or larger more-grabbable parts and supplies. The organizer sections come with removable bins – 6 in total – that match up with grooves in the lid to help prevent parts from spilling during transport. 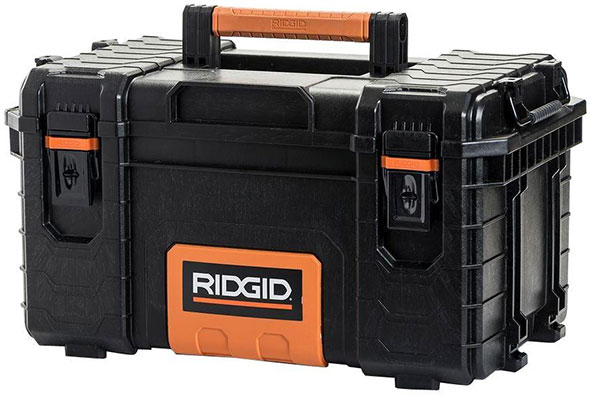 The new tool box is about the same size as a standalone tool box, and as with all three models it could certainly be used independently instead of as part of a storage stack or system. 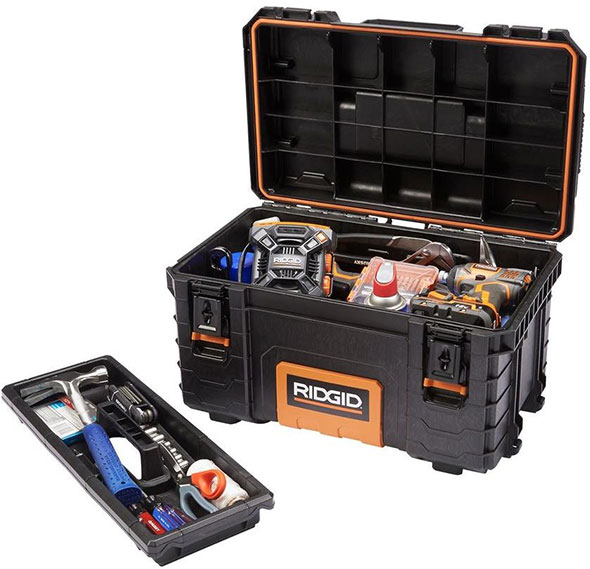 It features a large storage compartment and removable tray. 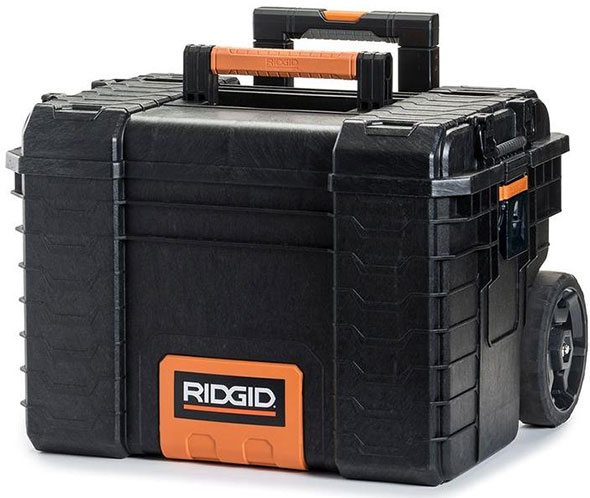 With the Ridgid Pro gear cart, you lose some front-to-back space, but gain an extendable handle and large all-terrain wheels. 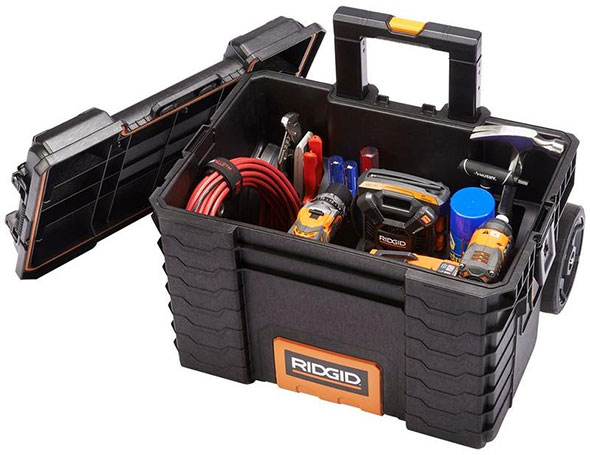 The lid latches at the sides and can be completely removed for easier access to tools and supplies. 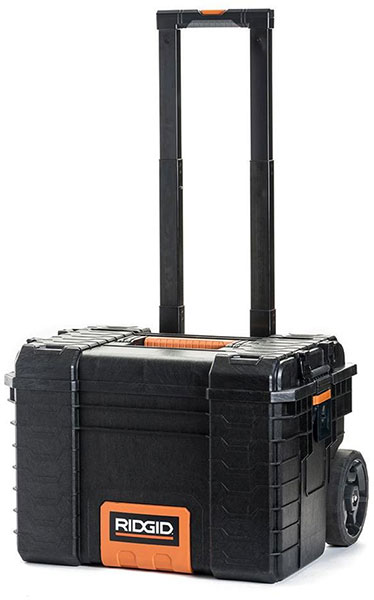 You can use this as the base of your Ridgid Pro tool box stack, or use it by itself as a mobile tool box to haul your bulky or heavy tools around. 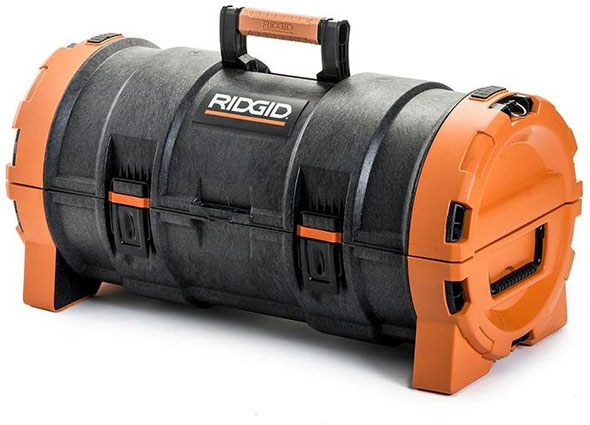 The new Ridgid Pro Tube tool box doesn’t stack with the other Ridgid Pro models, but it looks to share some of the same features, such as heavy duty construction, metal latches, and side handles. It also has loops for attaching a strap for shoulder carry. 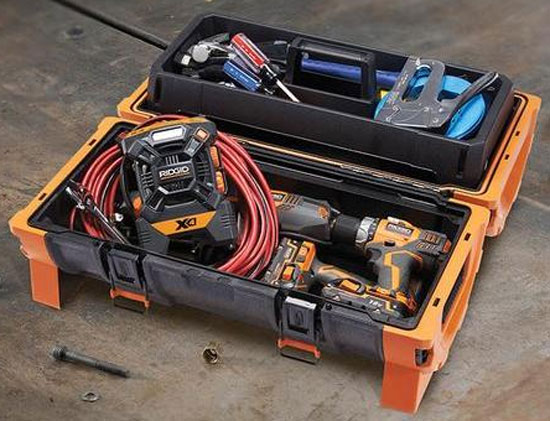 The tube-shaped design means the lid can rotate a full 180° degrees and rest on the ground. Most rectangular tool boxes have short lids that don’t allow this, at least without creating a tip-over potential. 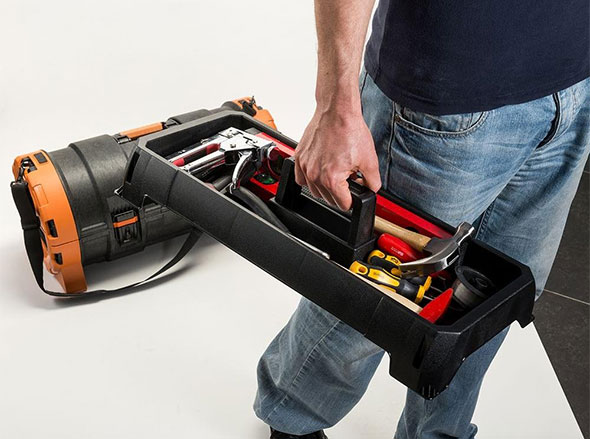 It comes with a removable tool tray that rests on top of the main storage compartment – instead of inside – which helps utilize more of the inner-lid space. 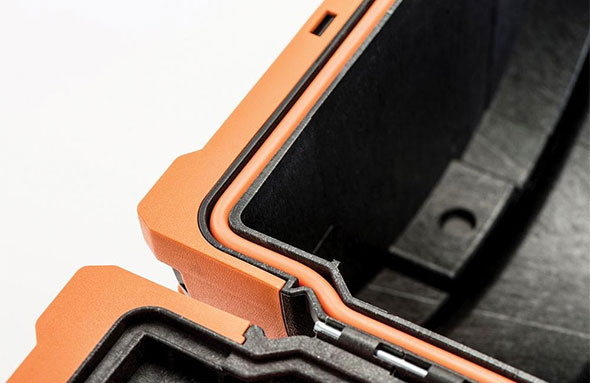 A thick seal helps to keep out water, dust, and other potential contaminants.

I have mixed feelings about the organizer and how it’s divided, as I typically prefer tool boxes with wide-open compartments that could be user-configured or left undivided to accommodate larger hand and power tools. But except for that one niggle, I find that Ridgid’s entire Pro tool box lineup to be well thought out.

Update: The Pro organizer has dividers that can be removed to create a large singular space.

The Pro Tube tool box interests me most, but it too has some downsides, such as its inability to stack well with other tool boxes.

Thanks to Dennis for the heads-up!