ToolGuyd > Power Tools > Cordless > Ryobi Brushless Cordless Belt Sander
If you buy something through our links, ToolGuyd might earn an affiliate commission. 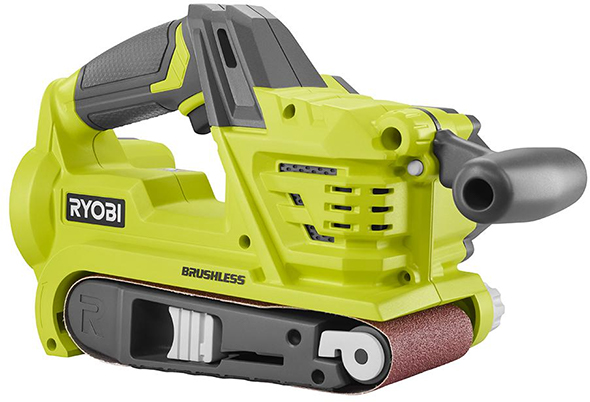 Didn’t we just post about the Ryobi 18V brushless cordless belt sander? Oh wait, that was the Ridgid belt sander. This is the neon green version. Err… I mean the Ryobi one, model P450.

There are some similarities, but also some differences.

It also looks to have a flat face for flush sanding. 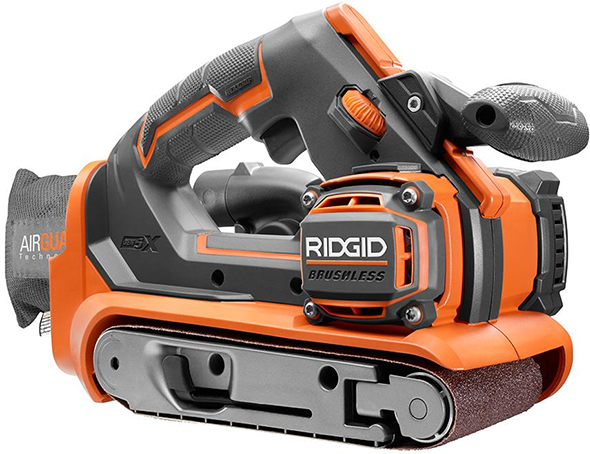 Compared to the Ridgid, the Ryobi doesn’t seem to have variable speed. That’s why I * the “max speed,” above. Ryobi says that the P450 18V belt sander can achieve speeds of up to 850 FPM, but I don’t see any speed controls, or mention of such in the product page.

The Ryobi is bundled with an ordinary-looking dust bag, unlike the Ridgid’s AirGuard dust bag. Both have ports for a vacuum or dust collector.

The Ryobi has a 5-position pivoting front handle, the Ridgid has a sliding handle. Both have similar tool-free belt change lever, with the lever style looking to be the only difference.

Ryobi and Ridgid “good” and “better” models? It could be a good strategy. Stanley Black & Decker has tried this with their Dewalt and Porter Cable brands, but only a few times. Their tendency has been to design different tools, seemingly from the ground up.

I’ve seen some cross-branding in Stanley Black & Decker hand tools, but nothing quite “good,” “better,” “best” in a similar sense as these Ryobi and Ridgid sanders.

It seems to me that the Ridgid is aimed at more serious users, the Ryobi at more budget-conscious users and DIYers.

I find the ergonomic differences to be curious. The Ridgid handle slides, but maintains the same angle, while Ryobi’s pivots, changing the angle and position.

In addition to the ergonomics, the Ryobi lacks variable speed. Let me ask this, since it’s something I genuinely haven’t thought about before:

A belt sander is often used for rapid material removal, and belt sanders aren’t known for being very controllable. I’m usually of the mindset that variable speed is better to have and not need than to need and not have.

There’s good to have another option, and quite frankly the tools look different enough that one shouldn’t simply consider the Ryobi to be a cheaper version of the Ridgid. Yes, it’s less expensive, but also different. Sirloin vs. Ribeye. Yes, one is considered better than the other on paper, but take away budget considerations and it comes down to a matter of taste and preferences.