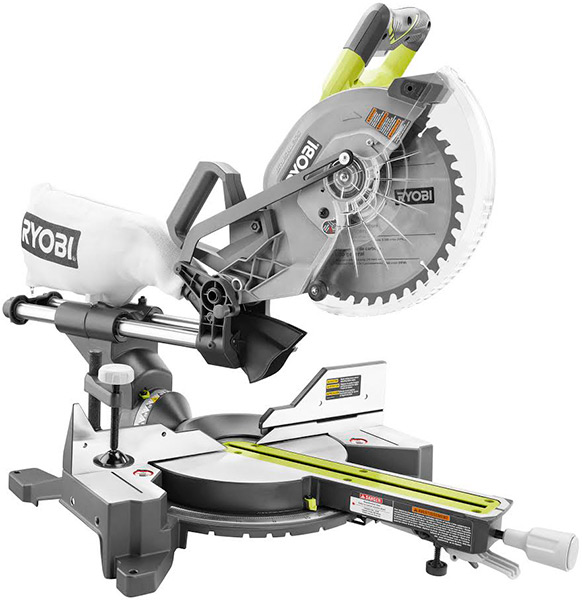 Can you guess who the next player in the dual battery cordless tool market is? Surprise, it’s Ryobi!

Ryobi is calling their dual battery line One+One and they just announced a 10″ dual-bevel sliding miter saw as the first product. The saw uses two of their 18V One+ batteries, effectively making it a 36V tool. Two batteries will be required to operate the saw, so there’s no limping through the last task on your punchlist with just one battery.

Ryobi is claiming that you can make over 800 cuts per charge with P194 batteries — remember these are the new part number Stuart talked about in a March post. It hasn’t been released yet and there’s no information from the official channels, but I’m pretty sure it is a 9.0Ah battery, based on the video Stuart recently posted that clearly shows the new 3.0, 6.0, and 9.0Ah batteries. 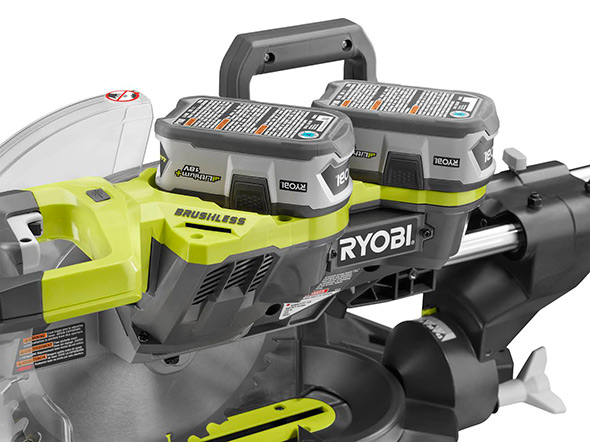 The saw uses a brushless motor to develop a no-load speed of 4000 RPM. It features an electric brake to quickly stop the blade after you release the trigger, and Roybi’s ExactLine laser alignment system to mark the cut line. Dust collection is through a 1-1/4″ dust port behind the blade. 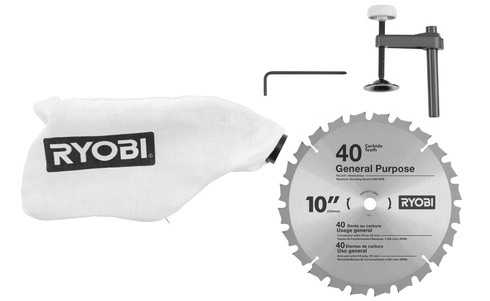 On Ryobi’s site they have a picture of some accessories. Take a close look at the blade. That’s a 24 tooth blade, right? Why does it say 40 carbide teeth? If you look at the photos of the saw, it does look like the blade they have on it has 40 teeth.

That hiccup aside, the saw is sold as a bare tool, meaning it doesn’t come with batteries. It does come with a carbide-tipped blade (of uncertain tooth count), a work hold-down clamp, and blade wrench. The photos show that a dust bag is included, although there’s no explicit mention of one on the website or press release. It would be silly not to include one so they probably either forgot to mention it or figure it’s just part of the saw.

Stuart’s Note: Ryobi 18V 4.0Ah battery packs are still 2 for $99. If you’re still rocking NiCad batteries, you might want to buy a Li-ion charger (maybe the new 6-port charger?) and Li-ion battery packs to make this saw a “kit.”

The next thing that came to mind is that the saw requires two batteries to run, but they don’t say the batteries have to be matched. This potentially means you could run the saw with one NiCad and one 9.0Ah Li-ion battery. Since Ryobi is a consumer brand, you know there are going to be people trying to run it with an old NiCad they’ve had for years, and a Li-ion battery that came with their new string trimmer.

Stuart’s Note: In dual-battery tools, matching up the batteries is best, otherwise performance and runtime will be dependent on the lowest specs.

How powerful is this 10″ saw going to be? With a brushless motor and two 9.0Ah batteries, there’s a possibility it’s going to have more power than Milwaukee’s cordless miter saw. It might even come close to the power of Makita’s new X2 brushless miter saw. At 34lbs, this is a pretty light saw, but it remains to be seen how well it is built. It is possible that it could have the power to compete with more professional saws, but not have the rigidity to be as accurate.