ToolGuyd > Power Tools > Cordless > Ryobi Phone Works: Smartphone-Connected Tools
If you buy something through our links, ToolGuyd might earn an affiliate commission. 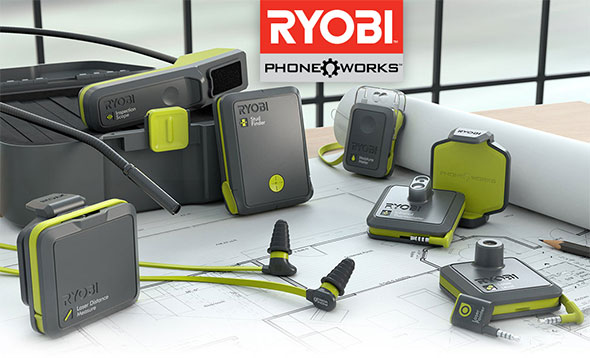 Ryobi has just come out with Phone Works, a new line of smartphone-connected testing and layout tools.

Ryobi Phone Works modules connect to your iOS or Android phone through the headphone jack and can be controlled through the free app. 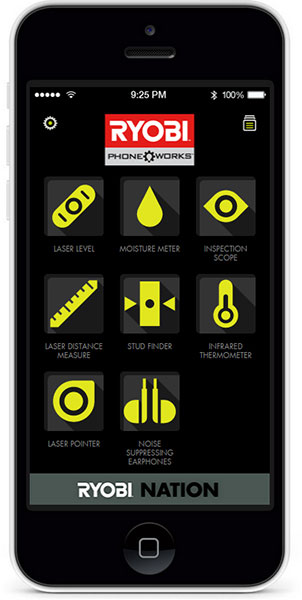 There are clear advantages to some of the Ryobi Phone Works tools, such as the inspection camera and infrared thermometer, as they make great use of smartphones’ built-in cameras and large LCD displays.

Other tools, such as the noise suppressing earphones, offer interesting and useful functionality that you don’t often see in standalone tools.

Many of the tools come with smartphone mounting clips, and are powered using standard AA or AAA batteries.

We have samples of all the new Ryobi Phone Works tools, and will be testing them out shortly. For now, here’s a rundown of the different tools Ryobi has launched as part of the Phone Works system. 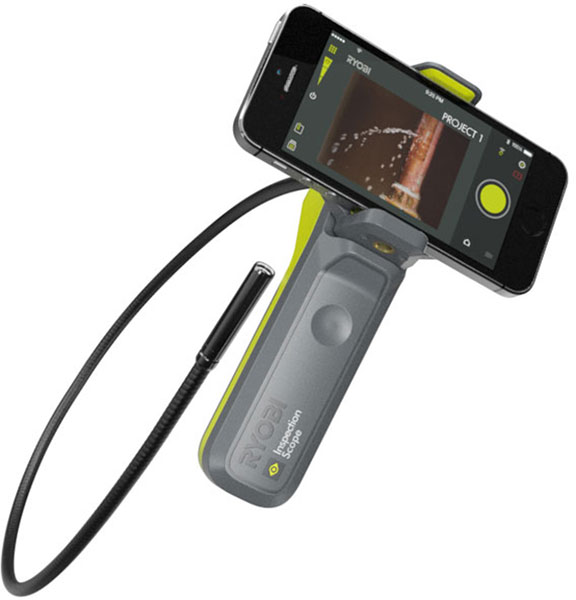 The Phone Works inspection camera (ES5000) features a 3-foot submersible and flexible cord with an LED work light, and it can be used up to 10-feet away from your smartphone. The scope captures images and videos straight to your smartphone. 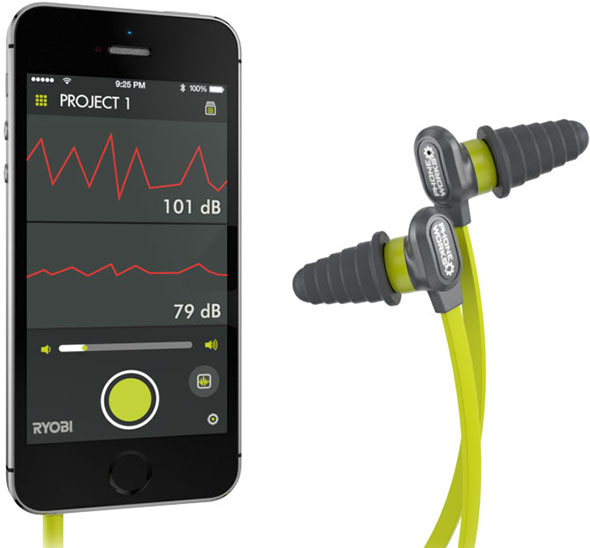 The noise suppressing earphones (ES8000) have a noise reduction rating of 30 dB, and meet OSHA safety standards. There is also a microphone that allows you to make calls when wearing the earphones. Not only that, the microphone can be used to record sound and noise.

The app allows you to selectively block noises up to 82 decibels and amplify sounds you need to hear – such as conversations and alerts. 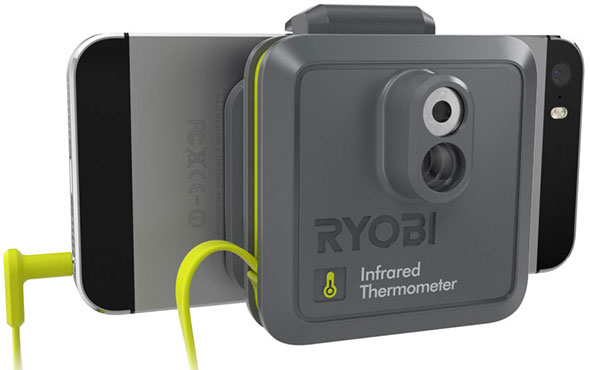 Ryobi’s Phone Works IR thermometer (ES2000) has a temperature measurement range of -22°F to 662°F, and can use your smartphone’s camera to create temperature overlays.

In a way it’s similar to the Flir TG165 imaging thermometer and Fluke VT04 visual thermometer, but it uses a visual image – instead of IR – for targeting and measurement logging. 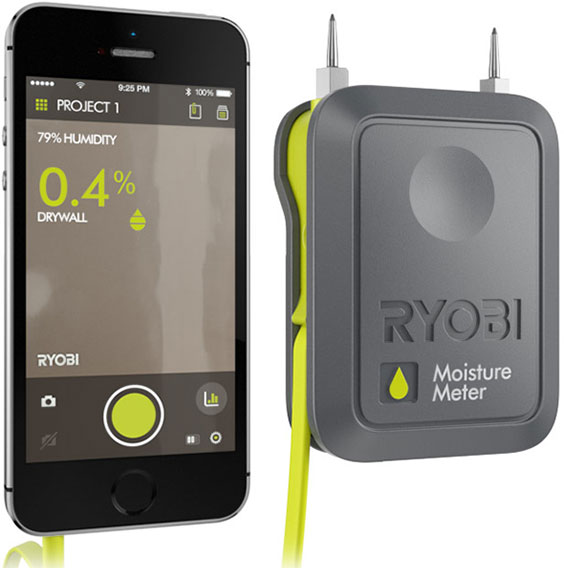 The moisture meter (ES3000) can be used with the Phone Works app to take simple moisture measurements, but it also offers the ability to track moisture content over time. You could also compare measurements to location-based humidity ranges. 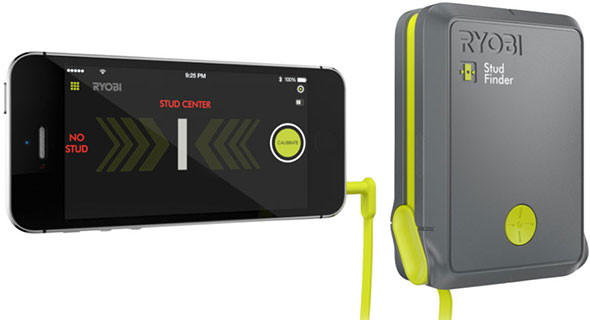 The stud finder (ES5500) works to locate studs under drywall up to 3/4″ thick, and can find stud centers with 1/8″ accuracy. There is also a built-in stud marker that can be operated one-handed and with a push of your finger. 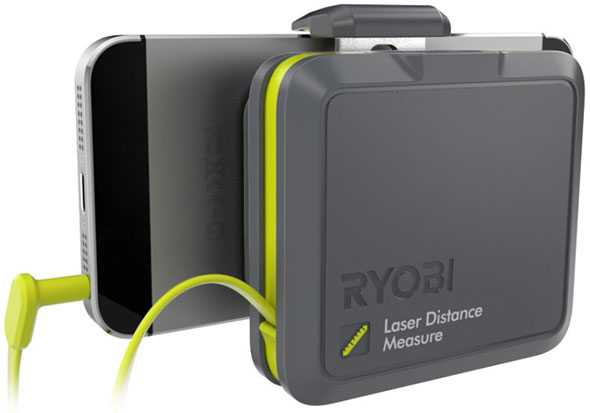 The Phone Works laser distance measurer (ES1000) can be used to make length, area, volume measurements, and can also be used with indirect and continuous measurement modes. The App combines measurement data with camera images for handy reference. Accuracy is 1/16″ at 90 feet. 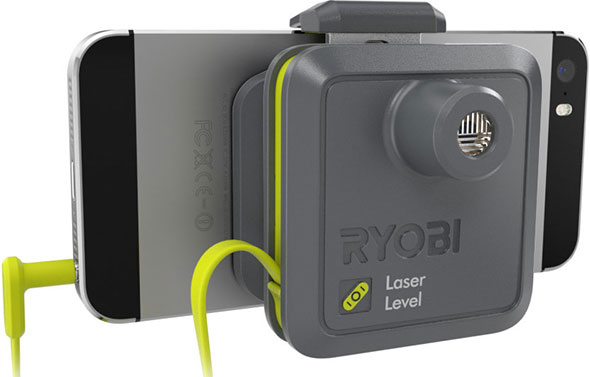 The laser level (ES1600) can be used as a crosshair level, as it utilizes your smartphone’s built-in sensors for precise level detection. It can also be used to make angular measurements, which can be overlayed on top of images taken with your smartphone’s camera. 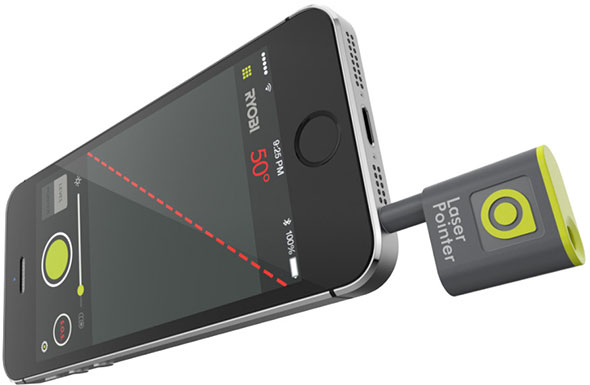 The laser pointer (ES1500) can be used to project a simple dot, or as a level with horizontal and plumb level modes.