ToolGuyd > Hand Tools > Layout & Measuring > Scientific Calculators for Workshop Use?
If you buy something through our links, ToolGuyd might earn an affiliate commission. 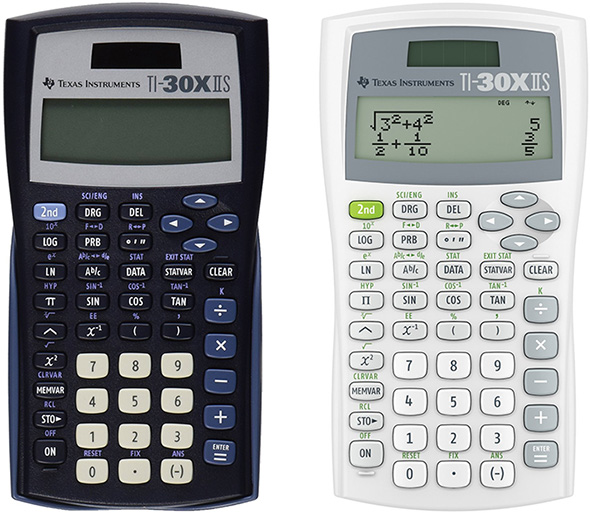 I already have one scientific calculator, so why did I buy another for the workshop?

I spotted a TI-30XIIS on sale for $10 at the local office supply store, as part of their back to school scale, and realized I needed one. I use the one in my office fairly regularly, and could probably carry it around with me, but there’s a good chance I’d misplace it.

They only had 3 color options in store – black, white, and pink. A bright orange or blue would work better to help it stand out, but I opted for white.

You see, I have been increasingly finding myself needing more advanced functions than my phone’s built-in calculator can handle, and the app I’ve been using is cluttered and “busy.” No matter how often I use that app, I just don’t like it.

I might also pick up one of the 4-function calculators also on sale. But there are several advanced functions that I find myself using quite often.

Trigonometry – When you’re working with triangles, squares or rectangles with diagonal components, or other angular situations, trig functions can help you solve quick dimension or measurement unknowns.

When I’m at a computer with web access, I’ll use Wolfram Alpha for more advanced solutions. Every so often I’ll use it on my phone, too.

But the ability to hammer it out on a handheld calculator can save a lot of time.

Parentheses – Setting up parentheses around operations makes complex calculations much easier, especially if there are conversions involved.

Pi – When working with circles, you need pi. How much edge banding will you need for a table of R-radius? etc. You don’t need a Pi button – just type in 3.14 – but it’s a convenience.

Update: I checked the calculator in my drawer, and it’s also a TI-30X IIS. The cheat sheet lining the inside of the plastic cover says copyright 1999. I know it’s at least 10-15 years old, but didn’t think it was that old.

I use calculators regularly, mainly my existing scientific calculator, my smartphone’s native app, the ones on my laptop and PC computers, and perhaps most often I use Google for simple calculations and conversions. I need more advanced functionality every now and then, for which Wolfram Alpha’s free web utility suffices.

I’m not the only one who uses a scientific calculator for workshop or project use, right?

And by scientific calculator, I refer to physical calculators and app-based ones alike.

Right now Amazon has the white one for $10, the black/blue one for $11, and a couple others at comparable pricing. Staples has black/blue, white, and pink for $10.

My new calculator has some added functionality I’m not yet familiar with (seemingly 2-line fraction math), which I might try at least once.

I looked into some of TI’s other models, including their TI-36X Pro which their comparison chart says is the only one suitable for things like physics and engineering. Looking it up while thinking snide thoughts, I see that it offers some built-in conversions, with one product image showing automatic conversion from feet to meters.

The TI-36X Pro also has built-in constants – nothing that’s workshop-suitable, but all kinds of numbers that I wish my calculator had built-in years ago.

Imperial to metric conversions in the TI-36X Pro include lengths, distances, weights, volume, temperature, speeds, power and energy, and pressure.

It doesn’t have everything I could want – such as Nm to ft-lb conversions, but it has an awful lot. So many that I’m considering returning the TI-30X IIS and buying a 36X Pro. But realistically, these aren’t the types of things that I need on the fly.

I suppose I could also argue that I don’t need trig on the fly either.

The truth is, I didn’t realize I needed another calculator until I saw them on sale at Staples while picking up some various other home, office, kids, and workshop suppliers on sale as part of their back to school promo. As an aside, some of their sale items are good prices, others are brought down to regular street pricing, so shop carefully.

While it might not seem a lot to jump up from a $10 (on sale) calculator to a $20 one, I’m hesitant about the added complexity and button clutter. Selecting unit conversions by having to use arrows to scroll down or across menus? I think I’ll stick with Google for when I need conversions beyond the basic ones I have memorized.

I rely on my phone for a lot these days, but sometimes a unitasker like a scientific calculator is a good buy.