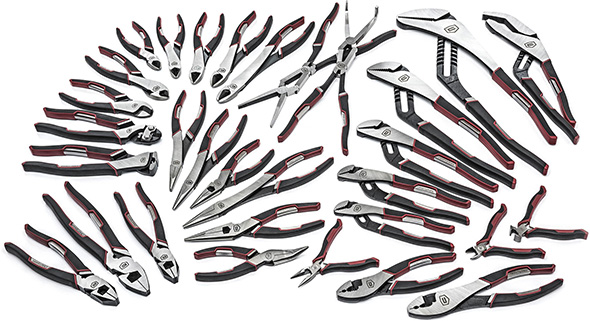 Earlier this year I noticed new Craftsman pliers on Sears’ website. They didn’t look too bad, but the marketing language was over the top nonsense.

I never posted about those pliers. What could I say?

Back in May, Ryan send me a message on Facebook (thanks!!), telling me that Craftsman’s USA-made Western Forge pliers were cancelled and all on clearance, as they were being replaced with made-in-China pliers.

I checked the website, and indeed, all of the Western Forge-made pliers were at clearance prices.

Last week, the Chicago Tribune reported that Sears was suing Western Forge. Apparently they settled their dispute with TTi and had a new contract dispute, with Western Forge.

The complaint says that Sears informed Ideal Industries, Western Forge’s parent company, that they wanted to extend their Craftsman hand tool contract for another year. Ideal and Western Forge were reportedly contracted to provide a 6-month transition period following any contract termination.

It is said that Ideal waited until April 28th, 2017 to inform Sears that it would not extend their contract, and that Ideal refused to fulfill any existing purchase orders.

I don’t have any communication contacts at Ideal or Western Forge, and haven’t contacted Sears for their side in the matter. I just want to talk about what I noticed.

Sears listed new Craftsman pliers, presumably made by Apex Tool Group, back in March of 2017. I saw those new pliers as “the beginning of the end” for the USA-made pliers Western Forge had made for the Sears Craftsman brand.

When I checked Sears’ site today, there were very many new pliers SKUs, all I assume being made in China, or at least overseas. Shown here is a “family photo” which I’m guessing includes all of the new pliers.

Sears definitely had some of these new Craftsman pliers listed on their website as early as March 2017. There were a few set options.

So… is this new expansive line of imported pliers in response to the contract dispute with Western Forge, or did Western Forge know something and refuse to have any further dealings with Sears?

As mentioned, I saw the writing on the wall when I saw the new Sears Craftsman pliers design. Sears’ transition from USA-made Craftsman tools to imported ones has not been an abrupt one.

I remember someone mentioning nervousness on the part of one of Craftsman’s USA tool suppliers – fear that Sears would suddenly source certain tools overseas from a different company and heavily disrupt the USA OEM’s operations and cash flow.

As an aside, to Sears Craftsman’s credit, they came out with new USA-made pry bars last Fall.

I don’t want to automatically take the side of Western Forge. But it’s hard for me to see Sears as the victim or hurt party here.

Apex Tool Group recently shut down the Armstrong brand, or at least their USA operations. It was never completely clear what was happening. Someone recently commented to that post, saying he was told the Armstrong brand is not being shut down, and that many of their tools would now be made by Gearwrench. I don’t know what that means – that Armstrong will live on in name only?

Would that have happened if Sears Craftsman hadn’t shifted from USA-made tools to imported ones? It was widely believed that some of Sears Craftsman Professional tools were relabeled Armstrong tools. But that was a few years ago now.

I find it hard to believe that Sears Craftsman and Apex Tool Group – which I’m guessing is their partner here, going by their history and the Apex-characteristic Double-X/X2 double-jointed pliers – put all these new pliers through design, production, and distribution phases in the couple of weeks since Ideal and Western Forge declined to extend their contract or provide any “transition period” products.

I don’t know what’s going on, but my observations suggest that Sears Craftsman was already looking to replace Western Forge’s USA-made Craftsman pliers before Ideal declined to extend their contract or provide transition period support.

Maybe other things factor into Western Forge’s decision, such as fear of Sears not being able to pay for products shipped.

N0te: Western Forge also makes, or made, certain other tools for the Sears Craftsman brand, most notably screwdrivers.

Western Forge announced in September 2015 (reported by Colorado Springs Gazette that layoffs were likely. There have been not been any recent announcements of that kind.

This is also why I keep saying Sears Craftsman instead of just Craftsman.

P.S. If anyone from Western Forge, Ideal, Craftsman, or Sears, can shed additional light on the situation, it would be much appreciated!