ToolGuyd > Hand Tools > Wrenches > Skil Tri Driver Ratcheting Wrench
If you buy something through our links, ToolGuyd might earn an affiliate commission. 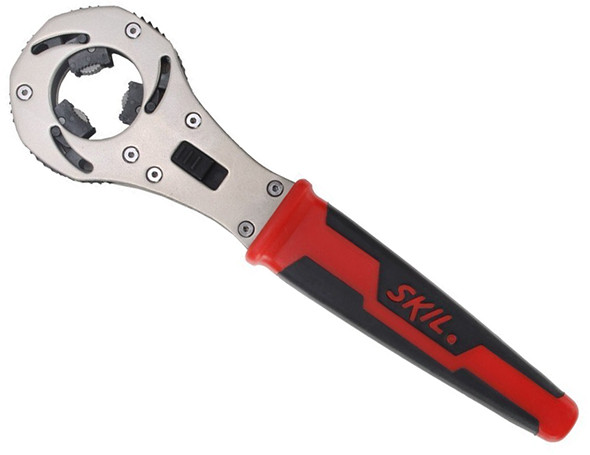 Meet the Skil Tri Driver ratcheting wrench, which a reader recently alerted me too (thank you, Fred!). The skeptic in me is crying inside, while the optimist struggles to find something positive to say.

The Skil Tri Driver fits both inch and metric fasteners, and is adjusted by rotating the ring.

Its mechanism kind of resembles that of the Craftsman Max Axess wrench, but has 3 points of contact instead of 6. 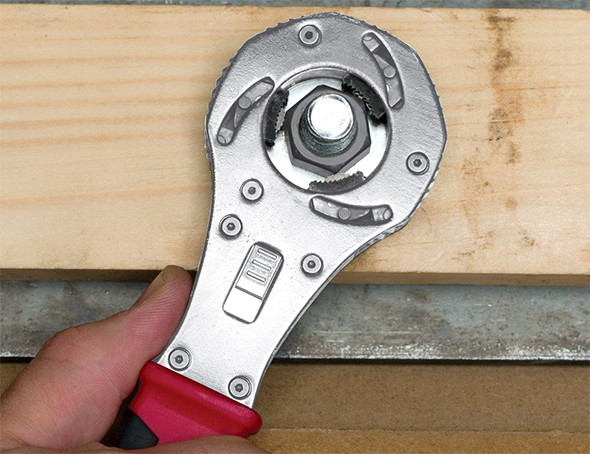 The wrench head looks large – too large if you ask me. I imagine that clearance issues will be a top reason owners put it down in favor of something smaller, or just different. But it’s not so large I’d consider it a deal-breaker. In fact, it kind of looks around the same size – or smaller – than an average-sized adjustable wrench.

And I know I’m not the only one who thinks that 3-point fastener engagement – on the corners no less – has the potential for damaged and rounded-over fasteners.

It’s also a ratcheting wrench. This should alleviate having to turn and reposition the wrench, especially in tight corners, but might introduce another potential wear concern.

There appear to be spring-loaded jaws within the wrench head. I don’t know how else to consider the two-toned grooved teeth (flats?). I really hope that this isn’t the ratcheting mechanism, but what’s the alternative – within the ratchet head?

The ratcheting mechanism will work one of two ways. Either the wrench flats stay fixed and rotate within the wrench head assembly, or the flats/jaws are set to yield in one direction for a ratcheting effect.

Since the jaw with adjustment mechanism takes up a fair bit of space, I’m assuming that the ratcheting works by means of yielding jaws that allow for ratcheting action. That wouldn’t be my preference, as it could contribute to potential fastener corner rounding.

This wrench looks like it inspires to be an all-in-one version of the Skil Secure Grip wrench, but with a fixed fastener range that skips smaller sizes that are very fairly common. Maybe there will be a smaller version that covers a range of fasteners under 9/16″, but if so, we probably would have seen it in a 2-piece set with this one.

I haven’t ruled out that there could be positive aspects of the Skil Tri Driver Ratcheting Wrench, but if there are, they’re not yet clear to me.

It sounds harsh, but I can’t think of a reason I’d buy this. Maybe it’ll work well on longer fasteners and threaded rod, at least where there’s enough clearance for the wrench head.

I took apart 3 commercial workbenches last week, with 9/16″ hardware. There’s no way I could have used this wrench for that.

Can somebody find something nice to say about this wrench? I mean this sincerely. What am I not seeing? Is there a good reason for anyone to buy it?

What would I buy instead? I’d plunk down a few extra dollars on a Channellock adjustable wrench, or even the new Dewalt 2-pack of adjustable wrenches, and would then start saving up for a proper socket set – even an inexpensive one. Around the holidays, you can get entry-level socket sets for not much money. I think that even “universal” sockets, with their gimmick multi-fastener-fitting profiles, might be better buys.