ToolGuyd > Power Tools > Power Tool Accessories > The TRUTH About Small Shank Woodworking Router Bits: 1/2″ vs. 1/4″
If you buy something through our links, ToolGuyd might earn an affiliate commission. 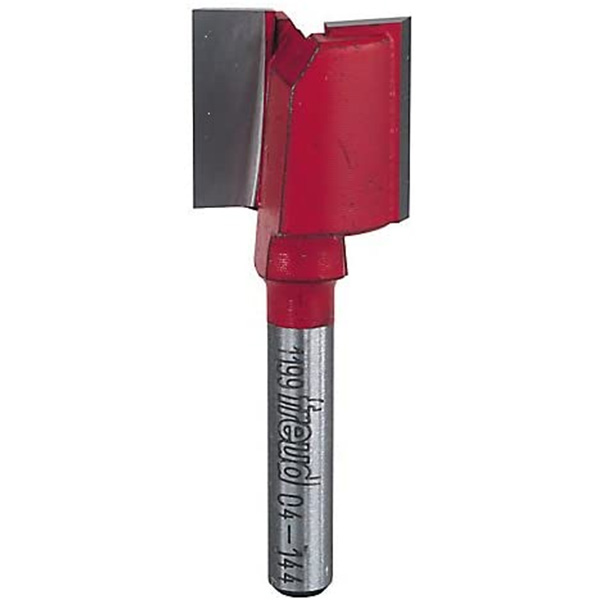 Way back when I was researching my first router and router bit purchases, a common piece of advice stood out – 1/2″ shank router bits are better than 1/4″.

What much more experienced woodworkers have said about 1/4″ router bits is somewhat true, but I let their experience-based advice too strongly influence my budding preferences, and so it became an ingrained idea over the years.

Their advice made sense – a thicker shank is indeed stronger. In the 1/2″ vs 1/4″ router bit debate, larger shank bits provide for greater stability, better collet grip thanks to greater surface area, and less deflection, with all of this translating into better cut quality and user experiences.

With a full-size woodworking router, you don’t ever want to use smaller 1/4″ router bits, or so I had been led to believe over the years, even though they often ship with 1/2″ and 1/4″ collets.

Meanwhile, compact routers and laminate trimmers are ubiquitous among carpenters, contractors, installers, and others in the construction and remodeling industry. 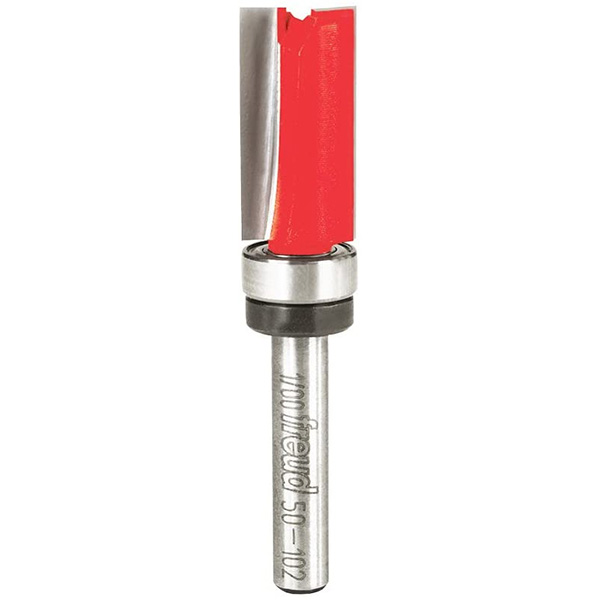 This past weekend I needed a top-bearing flush-trimming router bit, and all I could find at the local home center was a Freud 1/4″ shank bit – and at $5 more than I could get it for online.

I was hesitant – using a 1/4″ shank bit in my full-size router? Blasphemy! The router bit had a 1″ cutting length, which is also a bit shorter than I needed. Okay, I could adjust the cutting depth a couple extra times to compensate.

In hindsight, there are ways I could – or should – have improvised with a typical bottom-bearing flush-trimming router bit, but I lacked the vision of how to do so at the time.

So, how did things work out with my router’s 1/4″ collet seeing use for maybe the first or second time ever? Terribly! Okay, that’s a bit of an exaggeration. But, the results were less than ideal.

Instead of a smooth cut as I am used to, there were hints of chatter and deflection. I gave myself extra material to work with, and so it wasn’t the end of the world for me to do things over with two more “finishing cuts.”

The truth is that the “internet community” advice is right. I’ve parroted it over the years, that 1/2″ shank router bits are better than 1/4″ where possible, but to the point where I let myself believe larger shank router bits were the only option in a full-size router.

But, I have also grown accustomed to using compact routers with 1/4″ router bits for certain tasks and operations. For part of my project, I had to cut (12) grooves 1/2″ wide by 3/4″ deep x 13/16″ long. This was a cinch for the compact router and 1/2″ cutter x 1/4″ shank straight cutting bit I was using, although there were a couple of insignificant miscuts due to the straightedge I was using.

After this, I still prefer 1/2″ shank router bits, and I still don’t plan to use 1/4″ router bits in my full-size router unless it’s the only option.

But, the experience made me a little more open to the idea that 1/4″ shank router bits aren’t all that bad. If I had been open to the notion before, I would have gained more experience earlier, allowing me to better plan for how to counter some of the issues that could arise when using 1/4″ router bits with wider cutting edges.

Once I realized I was seeing evidence of chatter and bit deflection in my cut, I took shallower do-over passes, and that helped a little bit. Maybe there could have been ways to make the process more controllable, and it was with that thinking that I realized I could have created an entirely different template to take advantage of more popular trimming bit styles and sizes.

Part of the problem with my recent experience, aside from a less than ideal cutter size for what I was doing, is that I was using a 1/4″ router bit in a full-size router as I would have a 1/2″ bit. In hindsight, I know I would have been a lot more delicate if I were using a compact router instead of a full-size model, but possibly also because a compact tool would have been starved for power.

I am having trouble thinking of a good analogy, but perhaps it could work to think about fastening tools. Use a drill or impact tool to drive a smaller screw in the same way you would a larger one, and you could shear the head right off if you’re not careful.

I used that 1/4″ router bit in the same manner as I would have a 1/2″ router bit. Of course I experienced chatter and deflection, giving me an imperfect edge quality!

1/2″ shank router bits are better than 1/4″ shank router bits, that’s undeniable. But if you must use 1/4″ shank bits where you might prefer to use 1/2″, compensate for it, to mitigate the factors that could negatively impact cut quality. Take shallower cuts. Go slower. Pretend that full-size (typically 2+HP) woodworking router is a compact trim router. That’s what I should have done.

But hey, at least I finally got over my imprinted aversion to using 1/4″ router bits in anything but compact routers, although only to replace it with a slightly more experiential-based aversion.

You don’t learn if you don’t try.

Despite what I learned with this, I don’t feel the need to reexamine all of the professional, expert, and experienced advice I read, learned about, or was given over the years. But perhaps on a case by case basis I won’t let others’ experiences fully dictate my own decisions and preferences.