ToolGuyd > Editorial > What Do You Think About Craftsman and Sears? Your Voice WILL Be Heard!
If you buy something through our links, ToolGuyd might earn an affiliate commission.

I just got off the phone with someone who recently stepped into a leadership position at Sears. It sounds like he wants to bring about changes, as he asked for my take on Sears and Craftsman’s tools.

I gave him an earful – politely of course – and frankly aired out several years’ worth of frustrations I have with both Craftsman and Sears. 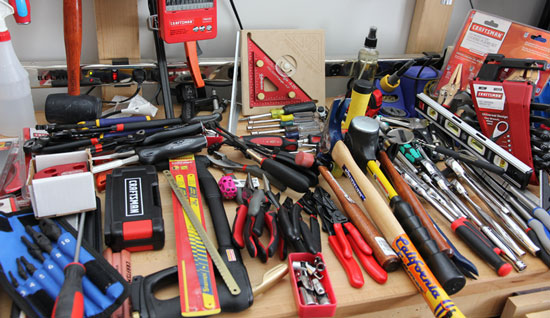 Shown here is a photo from late 2011, showing many – but not all – of the tools I purchased from Sears in the couple of years leading up to then. But because of how things changed with both Sears and Craftsman, I rarely even go to Sears.com or the local Sears stores anymore.

In all, we spent about an hour talking about my perception of the two entities. He’s in the unenviable position of trying to shake things up, and I like to talk. More than that, he seemed interested in the feedback, and eager to use it to potentially shake things up for the better. He seemed pleased at the wealth of feedback I offered, and gave me the OK to ask for your take on things.

So… what do you think about Craftsman and Sears, in regard to tools? Please keep your words civil.

Here are the kinds of things I talked about: Sears and Craftsman’s websites, their horrible search engines, annoying Shop Your Way emails and promotional strategies (really, $7 in surprise bonus reward points off a $70 purchase?!), Craftsman’s shift away from ‘made in USA,’ Craftsman’s shift away from intermediate and advanced tool in order to focus more on gimmicks and giftable tools, the many reports of thinner steel in their toolboxes, Sears’ decrease in offbeat and unique tools and brands (such as WoodOwl drill bits), and a couple of other things.