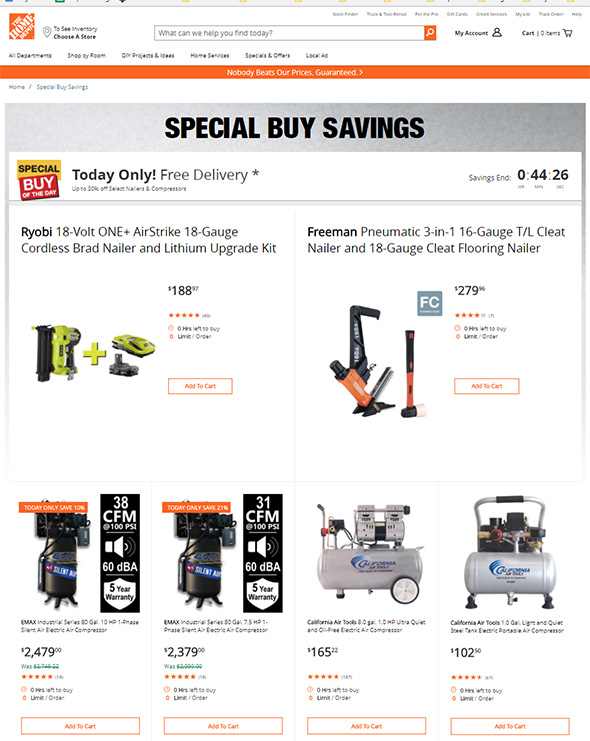 Officially, Home Depot’s “Special Buy Deal of the Day” deals end at 4am ET, according to all the countdown and expiration notices that are posted on their site.

Sometime during the 2016 holiday season – yes, 2016 – I noticed that the promo prices seem to have expired after 3am ET, even though the countdown timer still hadn’t reached zero yet.

Last night, I was up working on some things and also debating what to do about the disappointing “free tools, gimme” type giveaway entries we’ve been receiving. (Saying “yes” or “who doesn’t like free tools,” or “want moar toooools” doesn’t answer the “why do you want to win this particular prize package” part of the giveaway entry conditions.)

I noticed that it was after 3am ET, and I thought it was a good time to recheck Home Depot’s deal of the day countdown timer.

Well, there were 44 minutes left on the countdown timer, but all of the deals I checked had been bumped up in price, back to their previous promo or regular pricing levels.

So, observationally, Home Depot’s Deal of the Day Special Buy pricing looks to expire at 3am ET. Maybe earlier? Certainly not 4am ET.

Some of you are up late, or really early, and do your online shopping at those times. At least one reader complained to me about this promo timing discrepancy in the past year. Maybe you noticed it too, but shrugged it off.

As far as problems with the world or retailers go, this is a pretty small one. Still, maybe someone at Home Depot will read this post and fix whatever issue is going on. Either the deals are set to expire at the wrong time, or the timer is set to count down to the wrong time. I should also point out that the promos cycle over at 4am ET every day.

The point of this post is to 1) reach someone at Home Depot’s online team that can put a fix into motion, and 2) bring it to your attention, because. I can’t be the only one who has taken advantage of tool deals less than an hour before they are set to end.

Every New Tool I Bought From Amazon in 2017