ToolGuyd > Editorial > Who Else Loves Scott Blue Shop Towels?
If you buy something through our links, ToolGuyd might earn an affiliate commission. 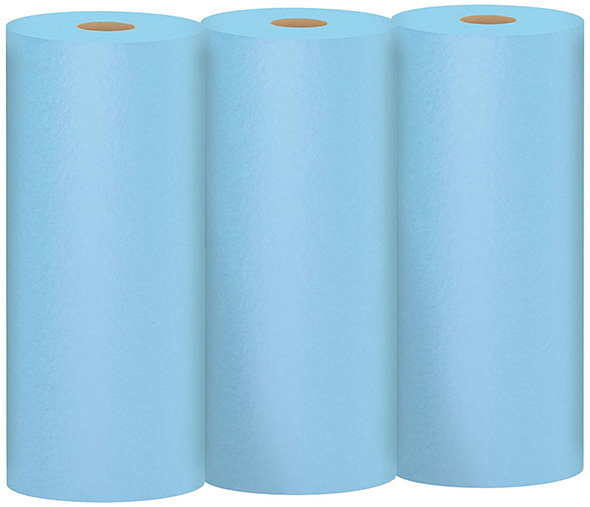 I’ve grown fond of Scott blue shop towels, possibly liking them more than Rags in a box. My daughter spotted a roll in my workshop and asked me why it’s blue. Honestly, I don’t know, but I do know that they’re definitely very different than regular paper towels.

I’ve found Scott blue shop towels to be stronger than regular paper towels, especially when wet. They’re also more absorbent, or at least they pick up and hold oil and grease quite a bit better. I think they’re less linty than paper towels, but haven’t done a lot to really test this. They also don’t tear apart as easily.

This is one of those shop staples that I remember being hesitant about. What’s so good about Scott shop towels? Is this one of those things that cost more simply because they’re “specialty?” But, I’ve grown to believe they’re worth the extra investment. I started with one roll. Then another. Now, I buy them by the case.

I use these in and out of the workshop, for all kinds of things. While there are cleaning tasks I could use regular paper towels for instead, there are many others where there’s just no substitute. Well, maybe except for rags in a box, which are also made by Scott (and parent company Kimberly Clark).

I don’t recall the brand, but I tried something other than Scott blue shop towels once. It was okay, but I prefer Scott’s relatively flat texture instead. The other brand was too fluffy, and textured too much like household paper towels.

While not as environmentally friendly as reusable shop rags, my usage varies widely and is occasional, rather than daily. For daily use, reusable rags are more economical, but you need a supply and place to wash them for reuse.

I came across an interesting product page mention that interestingly advertises:

Using paper shop towels (as an alternative to reusable, washable towels) better protects you and your employees from lead and heavy metal exposure.

You can find these shop towels for between $1.50 and $2 for a roll of 55 sheets. I’ve found the best pricing at wholesale clubs. For smaller quantities, online pricing seems to be decent.

Do you prefer Scott shop towels, or something else?

I might eventually choose between blue paper towels and rags in a box, but I tend to use them for different things. Either way, I prefer these over cloth rags or other disposable cleaning products.

Scott also makes “heavy duty” shop towels, and a special glass-cleaning style. I’ve never felt compelled to try the heavy duty version, but I might have used the glass-cleaning towel before.

What Hand Cleaners and Accessories Do You Use?