ToolGuyd > Hand Tools > Layout & Measuring > Woodpeckers Bevel Gauge
If you buy something through our links, ToolGuyd might earn an affiliate commission. 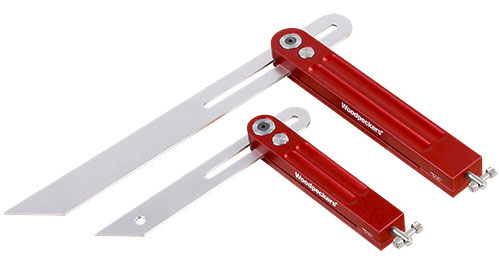 Woodpeckers recently announced new 7″ and 12″ bevel gauges that combine modern engineering with a classic design. The new bevel gauges are one-time-tools, but we hope that Woodpeckers opts to make them permanent additions to their measuring and layout tool lineup.

I had a chance to handle (and drool over) the 7″ bevel gauge at a recent Woodworking Show, and my goodness, it felt fantastic. I’m a regular fan of Woodpeckers’ USA-made tools, but the bevel gauge felt even better built and looked more elegantly designed than I expected.

The Woodpeckers bevel gauge absolutely puts to shame the <$10 Empire model in my tool box. The plastic-handled gauge I’ve been using has a large thumbscrew on the front near the pivot, making it impossible to flip over and prone to slippage. The Woodpeckers design, on the other hand, features a locking thumbscrew at its end, enabling the tool to be used on either side.

Notice that the blade is asymmetrically positioned between the two sides of the handle. I feel that this was done so that you can use the gauge with a wider range of workpiece thicknesses. 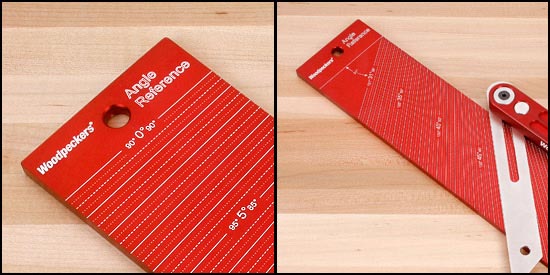 Maybe costs went up in recent years, but Woodpeckers has also picked up sales and distribution partners in the 4+ years since these tools was first sold. Perhaps that resulted in increased costs, since Woodpeckers cannot undercut their retail partners. These prices are the same as when the tools were brought back for a second round of ordering in 2014.