ToolGuyd > Flashlights & Worklights > 5 Years with an Elzetta ZFL-M60 LED Flashlight
If you buy something through our links, ToolGuyd might earn an affiliate commission. 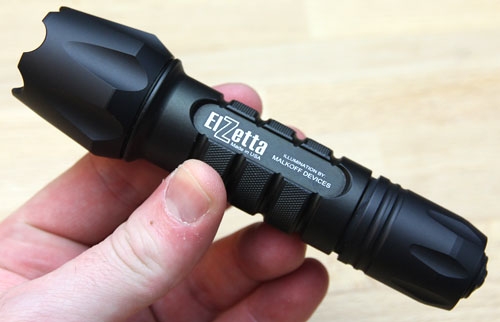 As a reminder, I received this light at no cost, as a review sample.

To be honest, given what I’ve experienced with this flashlight, I’m fairly confident that I would buy a replacement should my sample go missing. But if I could go back in time, would I have spent close to $200 on this? I’m not certain.

I don’t use this flashlight daily. I own a number of other lights, from Surefire, Streamlight, Maglite, Four Sevens, Zebralight, and Fenix. Here are a few of my previous reviews:

Aside from power tool LED worklights that I’ve been testing here and there, I’d say my other favorite LED flashlight is a Maglite Mag-Tac, which you can buy today for around $55. The Elzetta and Maglite are both powered with CR123 Lithium batteries.

But when I’m travelling, going on road trips, or otherwise want a light I know I can absolutely count on to give me strong and consistent illumination, I carry or pack away the Elzetta.

It’s been in snow, through dirty, countless road miles, and all kinds of temperatures. I can count on it to just work, every time.

What I’m hoping is that someone asks for a review of the flood lens version, so I have an excuse to consider buying one. Or maybe one of the new high output models.

The ZFL-M60 flashlights are built with Malkoff LED modules.

These are mainly marketed as tactical lights, and also as weapon lights, but I’ve found it to be the best everyday flashlight I have ever used. At close to $200, it had better be a fantastic and flawless light.

This version, ZFL-M60-CS2D, turns on to low light mode if you click the tail cap button, and if you turn the tail cap, it goes to high illumination mode. I like this a lot better than some of the other flashlight controls I’ve used before, including on the Maglite Mag-Tac.

The Maglite is a fantastic flashlight, and at less than 1/3 the price of the Elzetta, but the Elzetta feels so much more solid in my hand.

For what I often use a flashlight for, the Maglite – or any of my Four Sevens flashlights – is good enough, and some can argue even better than I need. But I plan on keeping this Elzetta light close at hand for as long as I can. It’s been with me for nearly 5 years, and I hope that’s just the start.

There are loads of different options.

You can buy Elzetta lights with different configurations. The Elzetta website isn’t behaving for me at the moment, so I’ll try to decipher the model numbers for you. My test sample, ZFL-M60-CS2D, has a crenellated bezel (C), spotlight lens (S), 2 cell design (2), and high/low tail cap (D). A standard (flat) bezel version with flood lens and single-mode click tail cap would be ZFL-M60-SF2C.

Given my experiences with this flashlight, I think I might buy an “Alpha” single-battery flashlight. It’s pricey, although not quite as much, and should be much more pocketable.