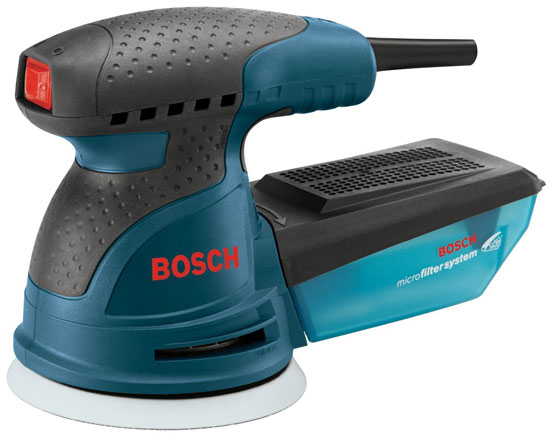 Craig is in the market for a new random orbital sander for woodworking projects, and wrote in asking for some advice.

I’m in the market for a new random orbital sander, having used a Ryobi for over 7 years now (I’m a hobbyist woodworker so none of my tools are used in production work). The Ryobi is finally passed its useful life, as the orbital function is not working properly, spinning the sander all over the workpiece and giving me no control.

I’m a big fan of your site for your honest tool reviews, and I was hoping you could take a minute and go through what you may know about the Bosch sander line – seeing as how you recommend Bosch tools (as in your recent reviews of their cordless gear).

My options are either Amazon or Home Depot (leaning toward Amazon since I’m a Prime customer). I don’t own any Bosch tools currently, but I’d like to start upgrading to a better line of tools as my woodworking hobby gets..ahem..more involved.

My choices are narrowed down to the 5″ Random Orbital Sanders, but I’m confused as to the various models. For example, what is the difference between the ROS20VSK and the ROS20VSC? Is there a better option? I’m mostly into smaller projects – so a 6″ sander/polisher may be overkill. Is there something else you’d recommend in your experience? I’d consider other brands as well, but from what you’ve mentioned, Bosch is a good company. I’ve long coveted their router series, and that’s high on my list when my Ryobi plunge router dies.

Craig is looking for a random orbital sander, preferably a 5-inch model, and it appears his budget is under $100. He’s leaning more towards Bosch and is looking to purchase the sander from Amazon or Home Depot.

There seems to be some flexibility here, so if anyone has had great experiences with other brands, please chime in with your recommendations!

What to Look for in Random Orbital Sanders

There are a couple of things to look for:

What We Know About Bosch Sanders

I own three sanders – a Bosch 1/4-sheet finish sander, a Ridgid 5″ random orbital sander, and a Festool sander. I have not used a Bosch 5″ random orbital sander, but I nearly bought one a few years back based on the woodworking community’s high regard and excellent feedback for it. The reason I opted for a Ridgid instead of the Bosch was because I had a small out-of-pocket tool budget, a Home Depot gift card, and at the time reviews showed the Ridgid to be close enough in performance to the Bosch.

If I were to buy another under-$100 5″ random orbital sander today, it would be the Bosch ROS20VSC. The current Ridgid R26011 model would be my second choice. I would lean much more towards the Bosch, given my experience with their 1/4-sheet finish sander, and since the newest dust canister is partially translucent to show accumulated dust levels.

To be clear, my recommendation for the Bosch ROS20VSC/ROS20VSK is not based on hands-on testing or direct real-world experience, but general experience with a different Bosch sander and what I have heard over the years from woodworkers and the woodworking community. If I had to buy a new sub-$100 random orbital sander for myself, this is the one I’d pick.

It actually took a few minutes for me to figure out the difference between these two sander kits. I was thinking maybe the ROS20VSK version came with an additional PSA platen for users who want to use self-adhesive discs instead of hook-and-loop. Or maybe the C-version lacks the variable speed control? Nope.

The only difference is the style of carrying case.

Over at Amazon, the “K” version has many more reviews, which suggests it sells a lot better. This made me think there was a difference in the tools themselves. But looking at the first available date, the “K” version was first listed in 2004, and the “C” version in 2013.

There are of course other brands of sanders in the $65-$100 price range. Dewalt’s 3.0A D26453K ($74 via Amazon) might be a good choice for those who mainly use coarser abrasives and work heavy hands, but I think the 2.5A Bosch ROS20VS in C or K kit configurations is the better tool overall.

Leave a Reply to But its me! Cancel reply