ToolGuyd > Power Tools > Routers > Best Router Motor for Router Tables?
If you buy something through our links, ToolGuyd might earn an affiliate commission. 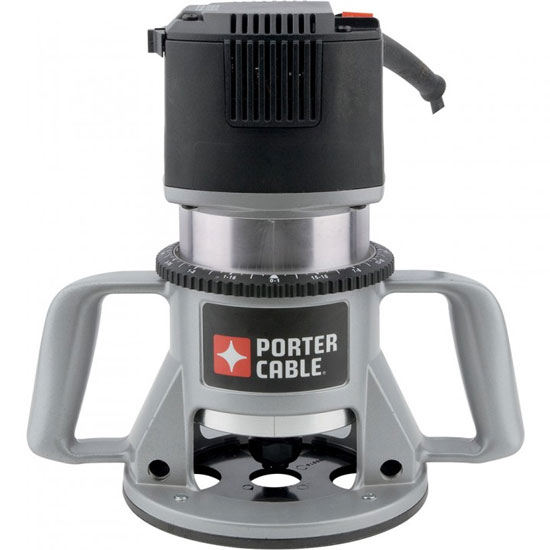 What’s the best router to equip a woodworking router table with? There are plenty of options, depending on how you want it mounted.

I bought a router lift plate, and so I went with a Porter Cable 7518, which has a heavy duty motor and 4.2″ mounting size.

Generally, many 2-2.5HP routers have 3.5″ diameters, and 3+ HP routers have 4.2″ diameters. You can often mix and match popular brands’ routers in the same mount. The router motors come out of their bases to do this.

Sometimes you can buy router motors separately, without any base, but I find it’s good to have a base. I bought my 7518 router with fixed base for little more than it would cost to get just the router motor. That way, I could use it handheld if I needed or wanted to, such as for working on something big, like a tabletop. 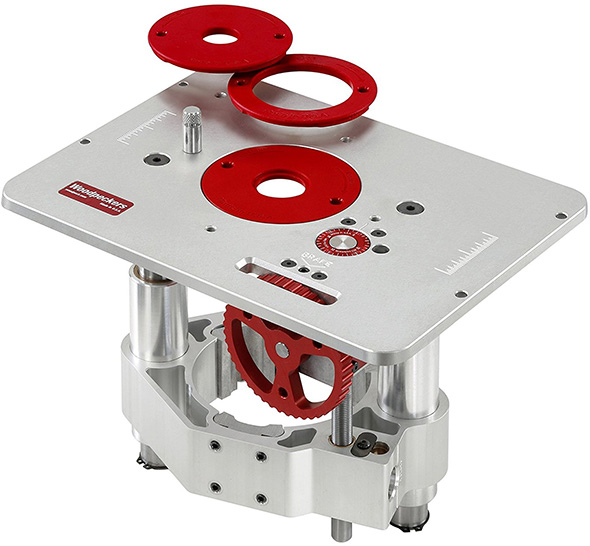 I went with the Porter Cable 7518 because it’s a heavier duty motor. It might be a bit more powerful than I would want in a handheld tool, but it should work nicely in a rigidly mounted router table lift. It’s better to have a little extra horsepower and not need it, than be wanting for it later on.

I also do have several other routers – a Porter Cable review sample that I really should talk more about soon, a Festool review sample that works perfectly with their guide rail system, and a Bosch-made Craftsman combo set that I bought a decade ago. I love my Craftsman Pro router, but am annoyed that it doesn’t work with Bosch’s accessories (at least according to numerous forum posts).

With both sets of pads for my router lift, one of these days I’ll try to do a comparison to see if the Porter Cable 7518 provides any real advantage over smaller routers. That’s part of why I went with the 7518 – for the added experience potential.

Dewalt’s routers seem to be quite popular, and might have been my second choice.

Some brands make router table bases that offer above-table height adjustments, extra bit height, or other features that you might not get with an ordinary router base.

My first router table was a Ryobi table that sold for $99. They still offer it, but in modern green color scheme instead of blue. I really liked my Ryobi benchtop router table, although it wasn’t ideal for standard accessories, such as aftermarket miter gauge.

With that Ryobi router table, and others like it, there will be several sets of hole patterns to fit different brands’ standards. So if going down that path, you might be limited based on which brands are said to be compatible with the router table.

Lastly, there are some routers that have built-in bases with enhanced features, such as by Triton. Those models offer easier adjustments and blade changes, at the least. 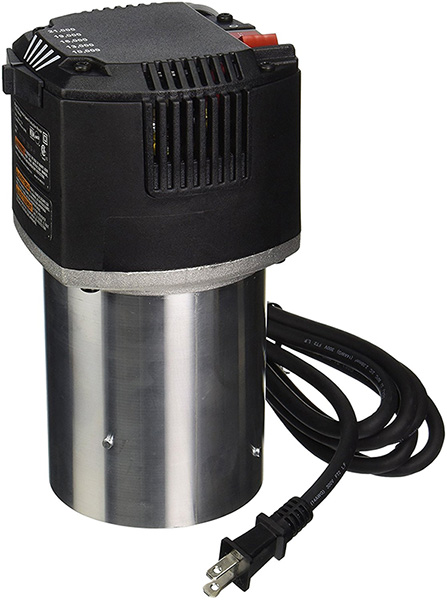 I went with the Porter Cable 7518. My second choice would have been the Dewalt DW618. My third choice – either the Bosch-made Craftsman motor I already have, or Porter Cable 892 sample.

There is also a Portamate variable speed motor-only option, but it doesn’t have very good user reviews. MLCS seems to have the same router under their branding, and it too has mixed reviews that made me hesitate.

Porter Cable is a reputable name when it comes to routers and woodworking tools, and so I put my faith in the brand. 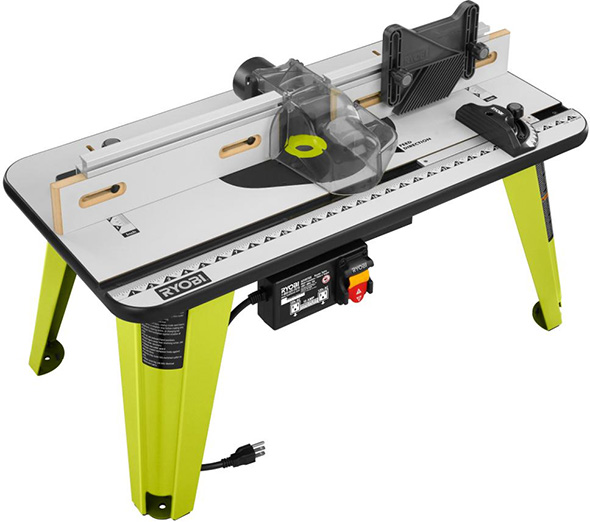 While I think the Dewalt DW618 might be a good choice, other models might enjoy wider compatibility, or at least greater certainty of compatibility.

The newest version of the Ryobi router table I mentioned, for example, has a list of compatible routers. Not a single Dewalt router model is listed. Does that mean it’s not compatible, or that it was simply left out of the table? 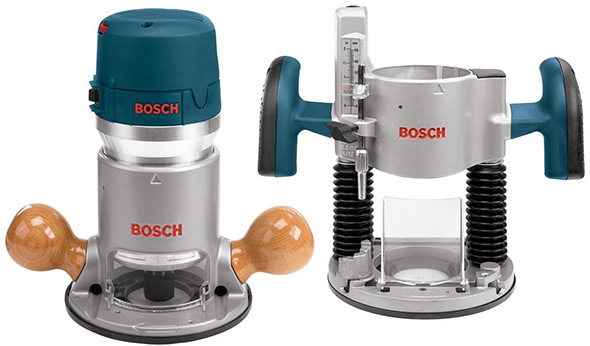 The Bosch 1617EVS, 1617EVSPK if you want both fixed and plunge bases, is a fantastic and well-regarded model. Bosch came out with a new model nearly 7 years ago, but I haven’t heard much about it since its launch.

My pick might be for the Bosch 1617EVSPK, which is an excellent router combo. This one kit, to me, would offer the best balance between a good handheld router and a good router table motor. The 1617 is very well supported, and so you can find a lot of accessories for it. 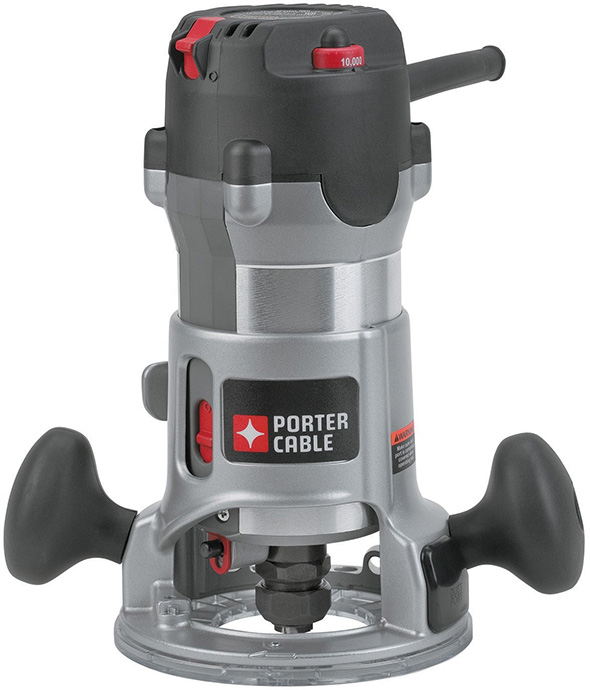 Porter Cable’s 892 seems to be a popular option and a good router table fit. Their 690 series routers are also popular, but they’re lower powered. The 892, a 2-1/4 HP router with fixed base is what I’d go with, if not the Bosch. 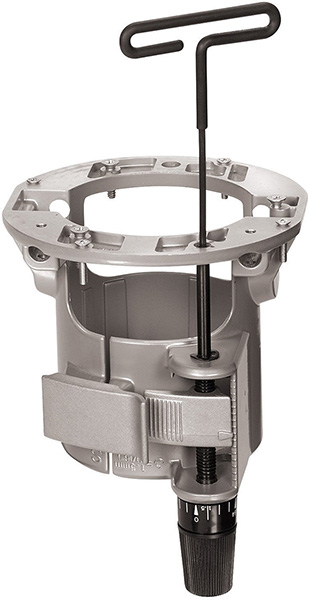 The Bosch has a slight benefit, in that they offer an under-table router base for their 1617-series router. That provides a good option for those wanting to move to a DIY router table setup. It doesn’t cost very much either – it’s currently $54 at Amazon.

Porter Cable does offer a height adjuster for their 890-series routers, model 75301. 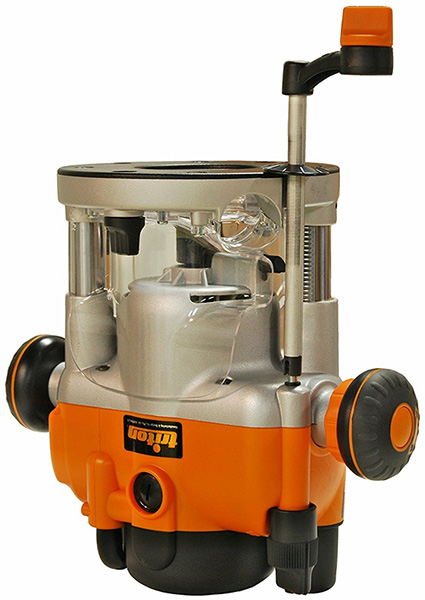 The Triton TRA001 dual-mode 3-1/4 HP router is a sort of all-in-one tool. I don’t know much about it, other than it seems to be well regarded by users.

Which router table and motor options did you go with, or plan to go with? Which would you recommend against?

When it comes to recommending against a combination, I think I’d sooner find a way to make a trim router work on a small table, such as Rockler’s, rather than to pair a low-HP full-size router. A lower powered full-sized router might struggle with some of the 1/2″-collet bits I’d use in a router table, or it could limit the depth or height of a cut.

Smaller full-size routers might be good for handheld use, where their size or lower power might contribute to better control (a theory I have yet to put to the test), but they might be underpowered for a router table.