ToolGuyd > Power Tools > Cordless > More About Bosch Connected and Personalized Tools
If you buy something through our links, ToolGuyd might earn an affiliate commission. 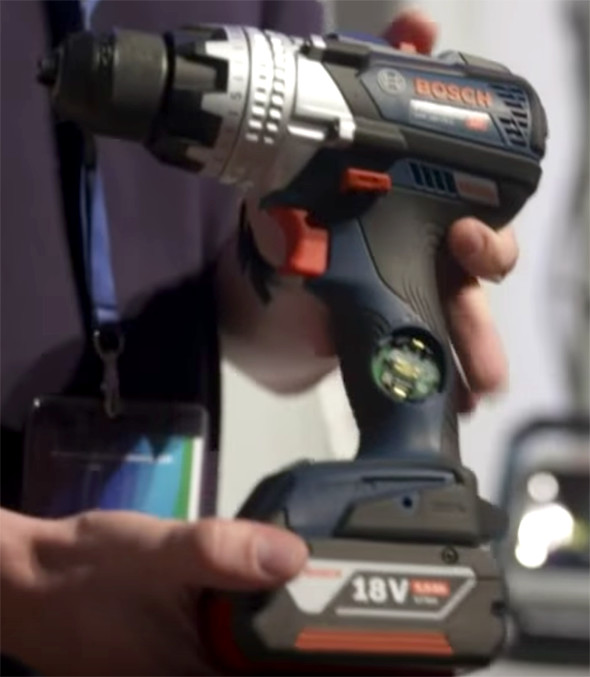 Back in March, we talked about how Bosch’s new networked cordless tools that allowed for some user customizations.

Those tools aren’t out yet, but over in Europe Bosch has already announced their expansion, and for the first time revealed some more specifics about the new technologies.

First, the Bluetooth modules are built into the handles. They had previously said:

The long-term goal is to network all professional power tools by Bosch and, thus, to offer users an even higher level of convenience and transparency – and to increase their productivity.

So perhaps this allows for easier production of connectable and non-connectable tools. 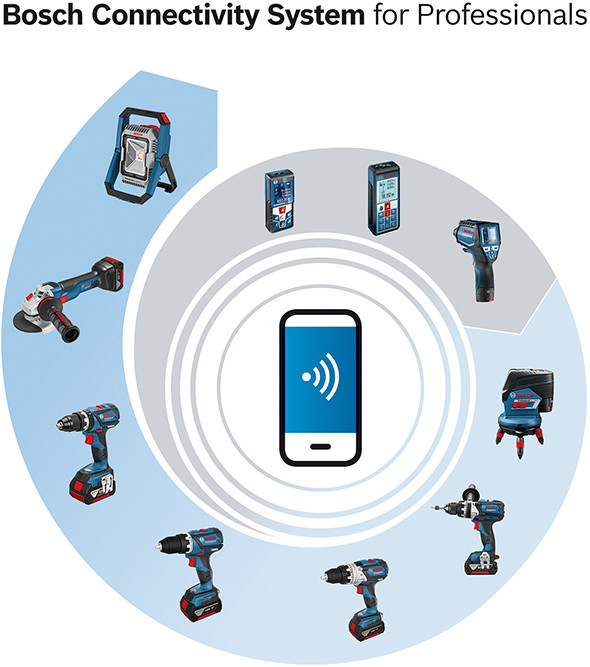 The first 6 tools will launch (in Europe) starting in the Fall of 2016. In addition to 3 layout tools, 2 already on the market and a laser launching soon, and a thermal measurement tool not yet released here, there will be:

Bosch Europe describes the drills as being 2 screwdrivers and 2 combi drills, which translate to mean 2 drill/drivers and 2 hammer drills.

The heavier duty drills will launch first, with the compact ones taking up the rear with a January 2017 launch estimate. Again, that’s their EU launch expectation. Bosch USA has not yet confirmed that these new Bosch innovations will be released in the USA.

The new Bosch Bluetooth-connected tools will offer several capabilities they believe will be beneficial to professional users.

Read Also: Everything you need to know about Milwaukee One-Key customizable tools

Bosch says that their new networked 18V cordless power tools will be personalizable, using LED afterglow as a good example.

No matter what a tool’s LED worklight afterglow duration is set to, not all users will be happy. The new connectivity means you can set it to 5 seconds, 10 seconds, 25 seconds, or other user-specified durations. Because users should be able to change things like that in their tools.

There’s also kickback control in the new Bosch 18V connected drills. Perhaps a roofer desires a little extra sensitivity in their anti-kickback protection. With a connected Bosch drill, this is possible.

With the angle grinder, in addition to the same afterglow duration setting as with the drills, you can toggle soft start on and off.

My thoughts are that Bosch might further enhance the customizability of their new connected tools, or at least I hope they are. Just being able to control anti-kickback protection and the LED worklight is a little limiting.

The LED floodlight worklight will also be user-controllable via the smartphone app. You could do things like active them remotely, dim the illumination output, or even group several worklights together for synced operation. There will also be a timer function, which keeps the worklight on for a designated amount of time.

A major goal of these new innovations is to provide users a way to personalize their tools to their needs.

In addition to the ability to operate worklights via a smartphone, tools can also be remotely locked.

There is also battery charge reporting, which could also be considered a feature of the tools’ diagnostics and usage data capabilities.

The connected tools will also provide users with data, as well as insights.

If a tool overheated and turned off, it could tell you why, and how to remedy it. For example, if a tool motor overheated, it might recommend running the tool for 1 minute without load, or other remedy advice.

A tool could tell you how long the motor has been running, and how often anti-kickback controls have activated.

A Bosch intro video also showed that the new angle grinder will feature a built-in display and control interface that will show things such as battery status and overheating alerts at a glance. The same display will also have a speed control adjustment.

Early reports show and describe the Bosch EneRacer battery pack as being built with larger Li-ion cells, but the packs are the same size or perhaps even smaller, due to how the internal cells and circuits are now configured.

Bosch isn’t the only brand to stray from the common 18650 Li-ion cell form factor, but it’s nonetheless an important development.

Right now, 6.0Ah battery packs provide for longest runtime, but everything I’ve seen suggests that the cells in 5.0Ah battery packs are capable of higher current loads, at least in theory and based on datasheet values.

If true, Bosch’s new 18V EneRacer 6.3Ah pack might be a truer evolutionary step forward than going from 5.0Ah to 6.0Ah. And if the battery form factor is appreciably larger than the 18650s popular in 18V-sized battery packs, they could offer the potential for even higher capacities.

Thank you to Leo for the heads-up and link to the following Bosch media event intro video:

Funny, I thought that Dewalt would be the first brand to try to respond to Milwaukee’s One-Key tool customization tech. Bosch’s stepping into this arena is definitely welcome.

A lot of users are very critical and doubtful that customizable tools will be of any benefit to them, but I don’t think Bosch would have walked down this path if they didn’t believe in it. It’ll be very interesting to see how things turn out.