Bosch has announced their new Core18V 4.0Ah compact Li-ion battery pack, GBA18V40. It joins other Core-level batteries, such as Bosch’s 6.3Ah pack, and a 7.0Ah battery that was announced in Europe.

The Core18V series of battery packs are positioned as follows: 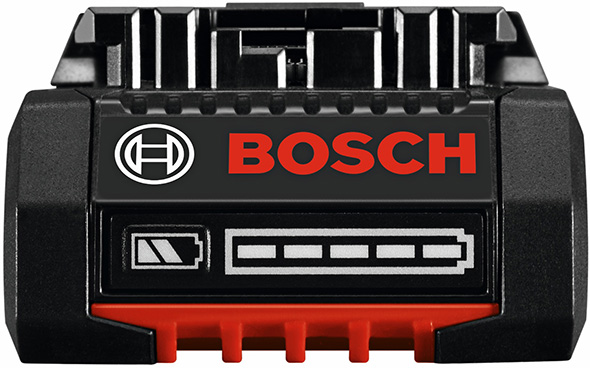 I know that this feature will make lots of users really happy – 5 battery fuel gauge levels. Ben and I were talking about this yesterday, and how one particular brand’s battery has been frustrating him, since he can’t tell whether the one bar means there’s 10% charge remaining, or 50%. Giving the compact battery 5 fuel gauge LED indicators is a nice user-friendly move. 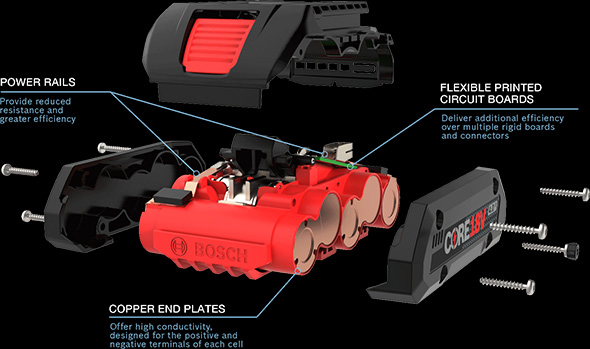 The new Bosch battery pack features “CoolPack 2.0” technology, meaning Bosch designed the battery pack with better heat management, for longer battery life. They say that it can deliver up to 135 percent longer life, compared to conventional batteries without CoolPack tech.

This parts breakdown shows off the battery’s power rails, which are said to reduce resistance and improve power transfer efficiency, flexible circuit boards, which deliver added efficiency compared to rigid boards and connectors, and copper end plates, which offer a more conductive path from the battery cells’ terminals, for greater power output over longer periods of time.

Basically, they built the new battery pack with all of the same features they developed for their higher performance 6.3Ah battery.

Lastly, why consider this battery pack over the “FatPack” 4.0Ah battery pack? Bosch says that it weighs 15% less. Performance and runtime is presumably comparable. 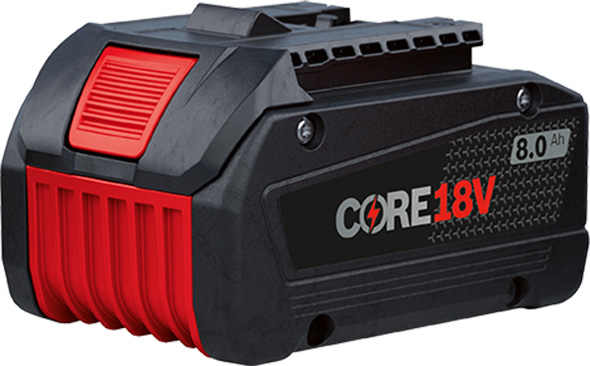 These new 21700-cell compact 18V battery packs are a step forward, in terms of how much power and runtime you can get from a 5-cell battery pack.

And while they are lighter than 10-cell battery packs of the same capacity, they are larger and heavier than lower capacity compact battery packs built from 18650 cells.

It’s a reasonable tradeoff, but keep in mind that this is just another new battery option.

Maybe you would rather run a compact cordless tool with one or two 2.0Ah battery packs (2 for $99, and eligible for a $20 off $100+ promo at the time this post was published).

So for 4.0Ah charge capacity, you have the choice between two slimmer 2.0Ah battery packs, this new Core18V battery, or one of the 10-cell battery packs, which seems to offer a more economical path to the same performance and runtime.

With time, it seems that these new larger-cell battery packs might become the norm, due to cost benefits stemming from current supply and demand trends. Then, things will likely be a little easier to sort through.

With this new Bosch battery pack, the on-paper benefit is that you get 10-cell power and runtime, but in a 5-cell package. But it’s also a larger 27100 form factor 5-cell package, which leads to size and weight considerations that only become apparent when holding a new battery pack in-hand.

But, can they keep up? That’s still something that we’ve been trying to figure out. Can the performance match up when paired with heavier duty tools such as circular saws or reciprocating saws? I hope so, because there are some downsides when pairing these physically larger battery packs with compact tools, such as drills, impact drivers, and worklights.

All that said, ignoring what the future might bring, the new battery pack brings one more competitively-priced option to the table, and that’s a good thing.