ToolGuyd > Power Tools > Drills & Drivers > Countersink Drill Bits with Non-Marring Depth Stops
If you buy something through our links, ToolGuyd might earn an affiliate commission.

There are many different types of countersinks for when you want a screw head to rest flush or below a surface. If you want to sink screws to a consistent depth, you could just use a drill press, but a countersink with a depth stop might offer better results.

If the surface is already sanded or finished and you don’t want to damage it, you can even buy countersinks with adjustable and non-marring bearing depth stops that stop spinning once they come in contact with the material. In this post we talk about two such products. 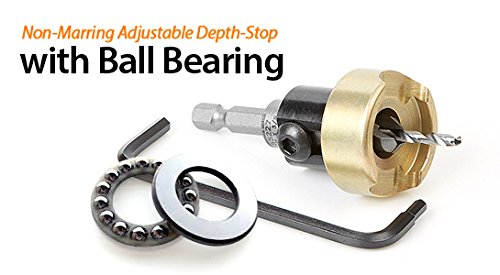 Amana Tool makes one of these non-marring countersinks. Their carbide-tipped 82° countersinks feature a depth stop that is mounted on a no-thrust ball bearing that will stop spinning when it contacts the workpiece surface.

The depth stop can be adjusted to make a countersink anywhere from 3/64″ to 3/8″ deep, a range which is shallow enough for flush-mounting and deep enough to accommodate a plug to cover the screw entirely.

Amana Tool does not specify what the depth stop is made from, but it looks like brass, a typical non-marring metal alloy. Amana says that it won’t scratch, burn, or mar surfaces.

The position of the carbide-tipped M2 high speed steel drill bit can also be adjusted with respect to the countersink cutter, to make the perfect length pilot hole for the screw you’re using.

These countersinks aren’t cheap – they’ll run you between $36 and $39. You can purchase them with free shipping from both Amazon and Tools Today. 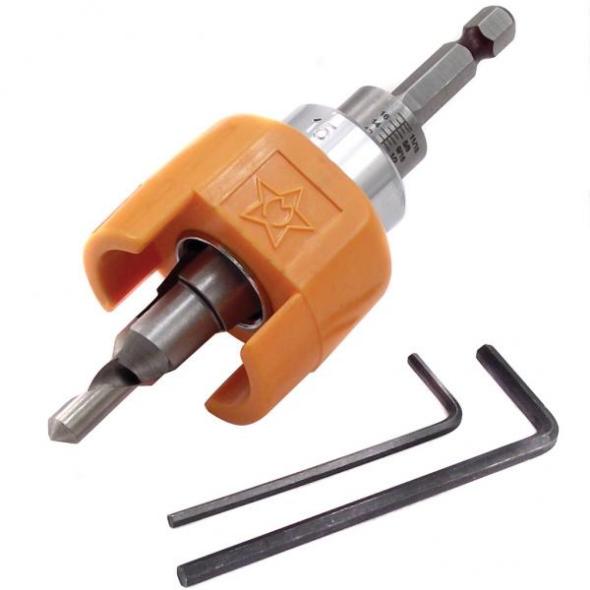 The depth stop features two slots which allow you to view the drill bit and countersinking head while they’re working. It is also adjustable from 0″ to 11/16″, and has a handy scale on the shaft that’s marked in both metric and imperial.

As with the Amana Tools countersinks, you can also adjust the depth of the drill to the screw size.

These bits are just a little bit easier on the wallet, as their prices range from $25 to $30 at Amazon (with Prime Free Shipping).

Below is a short video describing the Colt ZeroMark countersinking bits and showing them in action:

These types of countersink drill bits, which incorporate a pilot drill bit and separate countersink cutter, are typically designed for use with wood materials. Neither of the two brands discussed here explicitly say that their non-marring countersinks should only be used on wood materials, but it might just be an implicit understanding.

We would not recommend the use of these in anything other than wood, but the manufacturers don’t exactly say you can’t.