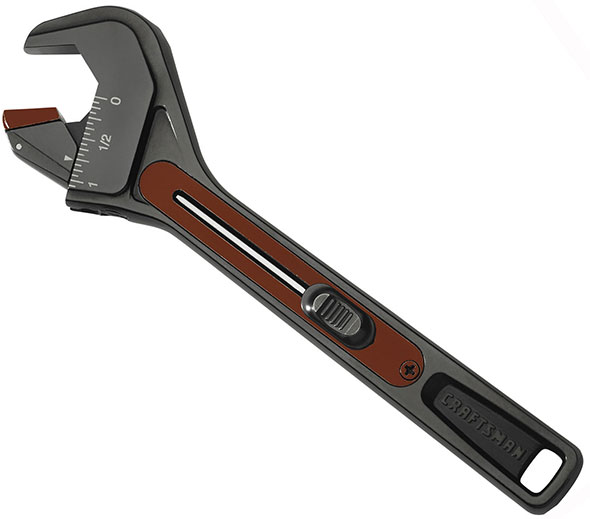 The new Craftsman Mach Series ratcheting slide wrench looks a lot like the Crescent Slide Wrench ($16 via Amazon), but with updated looks and a ratcheting jaw mechanism.

Everything in the Mach Series is about speed. The Craftsman Mach screwdriver allows for rapid two-handed fastener spinning, while the Mach ratchet has a Yankee screwdriver-style push-pull mechanism for speed and to work on fasteners in tight quarters.

The Mach adjustable wrench follows in the Mach spirit by featuring a quick-sliding adjustment mechanism, and ratcheting jaw that Craftsman says allows for 5X faster use.

Here’s Craftsman’s promo video that shows the wrench in action:

Going by online reviews, there are two common complaints about the Crescent slide wrench. First, some users report that it doesn’t always hold the jaw opening to the set size. Second, there are durability complaints.

Let’s say that the Craftsman Mach adjustable wrench was designed with criticisms of the Crescent version in mind. Then there’s still the ratcheting jaw mechanism to consider. I’m not a fan of ratcheting adjustable wrenches. Some are okay, others are just plain lousy.

I’m trying to reserve judgement until I can test one out in person, but this seems like the type of tool I wouldn’t enjoy using. But, who knows, maybe it’ll surprise me.

Update: I saw at the local Sears and played around with the “try me” demo display. The wrench is thick, feels clunky, and it took me 10 tries to get it to work just once on the demo fastener. Maybe this wrench has some hidden redeeming qualities, but none that I can find.