ToolGuyd > Power Tools > Cordless > Is Craftsman Phasing Out V60 Cordless Outdoor Power Tools Already?
If you buy something through our links, ToolGuyd might earn an affiliate commission. 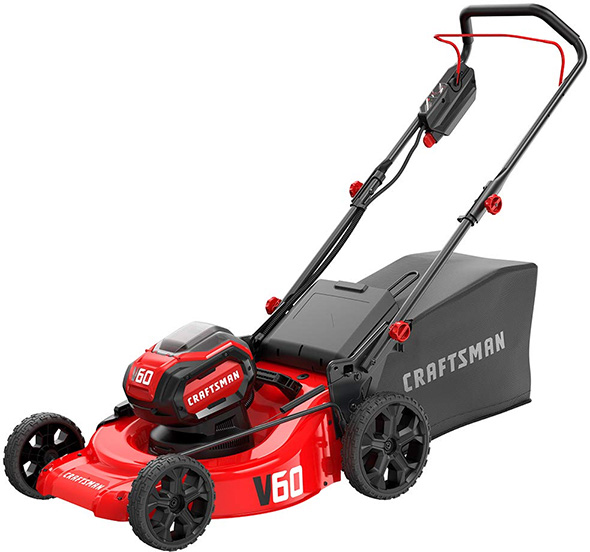 Over at the ToolGuyd forum, Jonesy asked whether Craftsman is planning to phase out its V60 line of cordless outdoor power tools. They noticed crazy clearance deals on mowers on trimmers at their local Lowes location.

I would agree with their initial assessment that the clearances are most likely end-of-season discounts and clearances.

So to answer the question posed as the title of this post – no, I don’t think Craftsman is phasing out the V60 tools or system.

Very soon, home centers will want to start carrying fall and winter outdoor tools, such as snow blowers. It’s not quite winter tool season yet, but inventory will likely start coming in.

Mowers, trimmers, and other such cordless power tools take up a lot of space. How many mowers will be sold in late August compared to the period from March through June? Trimmers?

Craftsman just launched their V60 line of cordless power tools last year, and there’s no way I could imagine it being discontinued or phased out.

Let’s say Craftsman plans to launch new brushless motor V60 cordless power tools. That wouldn’t preclude their ability to move the brushed motor or first brushless tools that launched as part of their first phase of new tool releases. There is room in Craftsman’s catalog and retailers’ warehouses for “good, better, best” options. How many different Ego blowers does Home Depot offer in their online store? At my count, there are four models, two handheld and two with backpack power supplies.

Maybe Craftsman will make changes to their tools before next spring, that certainly is possible.

There are lots of unknowns, but I would say there is very little likelihood of the still very new Craftsman V60 cordless platform being phased out.

There are never any guarantees, but if you have your heart set on a new Craftsman V60 power tool, whether it’s been on your wishlist all along or you find a clearance deal you can’t pass up, I believe that Craftsman does plan to grow the system. Craftsman has always been a big outdoor power tool brand, and that’s a market segment that Stanley Black & Decker is very interested in.

We discussed Stanley Black & Decker’s announced strategies a few months ago, where they said that Lawn & Garden was an area of potential acquisitive growth areas. They also added a lawn and garden category to their envisioned 2022 market share pie chart.

Phasing out the V60 lineup now would be a huge and costly mistake for the brand, and a big setback for parent company Stanley Black & Decker. With no foreseeable reasons to justify a phase-out of the new cordless platform, and the very strong potential for huge negative consequences, I am extremely confident that this is not what’s driving the “crazy clearance deals.”

It is also possible that competition with Amazon is driving Lowes to heavily discontinue their remaining Craftsman V60 cordless power tools.

Craftsman’s V60 cordless leaf blower is still $269 at Lowes, but $169 at Amazon. Since blowers will be in strong demand through the fall, that could be why it is so far excluded from Lowes’ clearance efforts.

It is also possible that Craftsman’s lower voltage or gas engine tools are outselling the V60 options. If that’s the case, wouldn’t Lowes want to devote more shelf or floor space to those offerings?

There are a lot of possibilities to explain the clearance deals on Craftsman V60 cordless outdoor power tools, but as mentioned I don’t believe the system is being phased out in any way. I cannot imagine any scenario where Craftsman or Stanley Black & Decker product managers, marketing heads, or corporate executives would green-light such a move. Well, there is one scenario, but I highly doubt that they’ve developed a safe and affordable nuclear thermoelectric power source to replace the V60 battery form factor with.

We have no plans to phase out the CRAFTSMAN V60 line. It’s a popular system of tools that we will continue to develop over time.