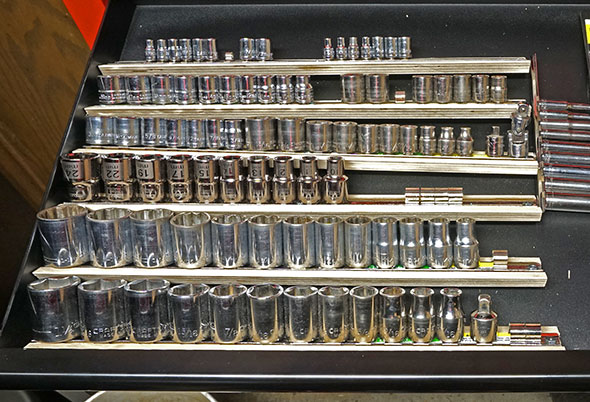 I’ve never really liked the different ways I’ve seen to store sockets in a drawer. If you lie them flat so you can see the markings, you lose valuable drawer space, if you store them vertically to save space you can’t see the markings and you may need a deeper drawer depending on the length of your sockets.

I wanted to stay away from separate labels, because they take up extra space and as soon as you get everything labeled, you pick up that odd x/32nds socket for a project and have no place to put it.

I also wanted to be able to easily transfer sockets from tool chest to tool chest. I’ve reviewed both the Milwaukee 30″ combo and the Craftsman Pro 41″ Smart Lock Combo this last year, and I’ll probably be reviewing more. My first though was to go back to socket rails, but I’ve never been a fan of them, especially the cheap metal ones.

While searching for different socket storage ideas, I found this project on YouTube:

I liked the way the wooden backers held the sockets upright and made the rails much stiffer, but it’s hard to read the sockets when they are standing vertically. So I thought that a carrier that held the sockets at a 45° angle would give good readability while only taking up a little more space.

To start, I didn’t want to spend a ton of money on something that wasn’t going to work, so I picked up a bunch of these socket rail sets at Harbor Freight for really cheap. Then I designed my carriers around them. 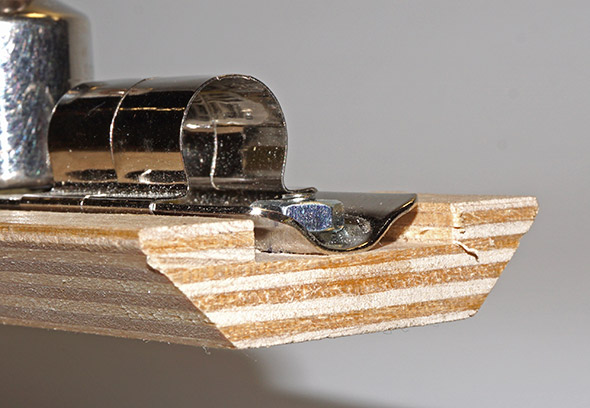 I made backers for the rails by taking a 2″ wide strip of 1/2″ Baltic birch plywood and cutting off the edges at a 45° angle on the table saw.

Next I routed a 1″ wide groove into the topside to recess the socket rail so the sockets would rest on the wooden carrier. This wasn’t as straight forward as I had hoped because the thickness of the rails varied from rail to rail and even on the same rail. So I opted for a shallower groove.

Finally, I drilled holes through the bottom to secure the socket rails and countersunk the holes to hide the screws.

When I started putting sockets on the holder, I found that the whole thing balanced pretty well on the 45° edge, but when I would put them inside a drawer, they would tip over when I opened or closed it.

To combat the socket holders from tipping over, I added some rare-earth magnets. This would hopefully keep them upright and as a bonus it should keep them from walking all over the drawer.

Using a 1/2″ Forstner bit, I counter-bored some holes for 1/2″ ring magnets. I decided that I didn’t want the magnets scratching up the paint on the drawers so bored the holes slightly deeper than the thickness of the magnets.

This made the socket holders much more stable, to the point where I rarely had a problem with them falling over in the soft close drawers of the Milwaukee 30″ combo. When I transferred them to the Craftsman Pro 41″ combo, the lack of the soft close feature meant that I’d sometimes open the drawer and find the sockets had tipped over.

Here’s a quick walk though of my 45° socket holders:

There still are some problems with my system. I mentioned above that they can fall over (or even walk around a bit) when the drawer is jerked open or slammed shut.

There are a few ways that I could fix this. I could use thicker wood. A 3/4″ thick board would give me a 1″ hypotenuse — a little wider base for the socket rails to rest on. Or I could also either use stronger magnets, more magnets, or larger magnets. The ones I bought were N42. They make stronger ones, but they are a little harder to find and get more expensive. Or with a thicker base, I could use 3/4″ diameter magnets.

I suppose I could always remove the mat from the drawer, or at the least the section where the sockets live, but I wanted this system to work in any tool chest without modifying the drawer.

Another problem is that the sockets aren’t as readable as I had hoped. On many of the sockets, the etched number doesn’t line up with one of the four “sides” of the socket as determined by the square drive hole. It’s just sloppy that they are positioned so that then are obscured when they are on a socket strip. I can’t really do much about the socket markings with this system though, besides buying all new sockets.

My last issue isn’t with my system, it’s with the socket rails. I think I might have went overly cheap with the socket rails, as I’ve busted about 4 of the socket clips just by snapping sockets on and off. The spring steel is so thin and brittle it can just shatter. Next time I’ll definitely use better rails.

What would you have done differently?

A Quick Caulk Rack out of PVC and Wood

My Journey to an Organized Workshop with Modular Tool Cabinets: Part 1, Design