ToolGuyd > Power Tools > Cordless > What’s Delaying Dewalt from Coming out with a 20V Max Cordless Brad Nailer, Pinner, and Stapler?
If you buy something through our links, ToolGuyd might earn an affiliate commission. 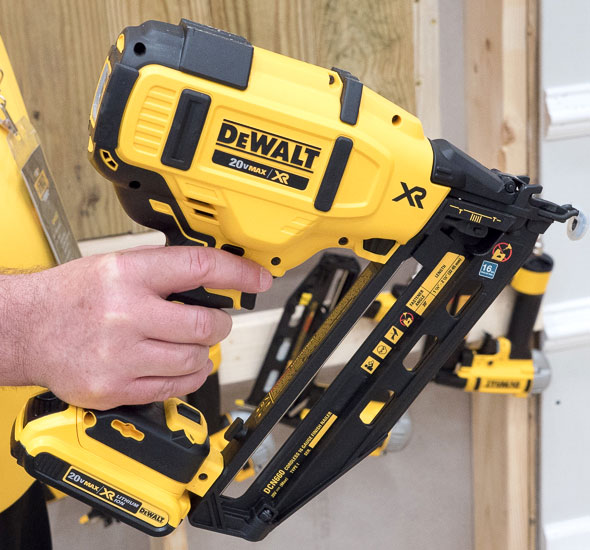 Ken wrote in, asking when Dewalt would get a move on with their 20V Max cordless nailer lineup.

Actually… they do have a 20V Max brushless finish nailer in the works and nearing release. I briefly discussed it in my recent Dewalt 20V Max preview post, after having a chance to demo that and other new and upcoming tools at a recent media event.

Could you do an article on what is taking so long for Dewalt to come out with cordless brad and finish nailers for their 20V Max line?

I have all 20V max tools but may be forced to buy another brand for these cordless nailers. I would hate to have to carry another set of batteries and chargers to the jobsite.

Here’s the thing… cordless nailers are big. I haven’t received a DCN660 finish nailer for testing, and I didn’t remember to compare it directly against an air nailer at the media event. But as soon as I saw, handled, and tested the nailer at the event, I felt it to be a little bulkier than the finish nailers I’m used to. Maybe my senses deceived me.

I’m thinking that Dewalt hasn’t come out with a cordless or brushless 20V Max brad nailer, pin nailer, or stapler because they cannot get the tool’s sizes or ergonomics just right. There’s more to cram inside the tool, and if the size and balance is off, pros are not going to be happy.

Would you rather work with the hassle of an air compressor and air hose, or an under-performing or otherwise lacking cordless nailer?

Or maybe the cost is a hurdle, but I don’t think that would be it. As mentioned in my other Dewalt preview post, they’ve got a whole new line of air nailers on the way. I think that there would have been a strong incentive to offer an expanded selection of cordless nailers side by side the air nailers. They did show off their brushless finish nailer alongside the air nailers, but nothing smaller.

Makes sense, right? The are either engineering or strategic reasons for a lack of 20V Max cordless nailers. There could be both, but I think that, strategically, there’s strong motivation for Dewalt to come out with such tools as quickly as possible.

Makita has come out with an 18V cordless brad nailer that they say provides “air-like” performance. But look at the size of the thing. 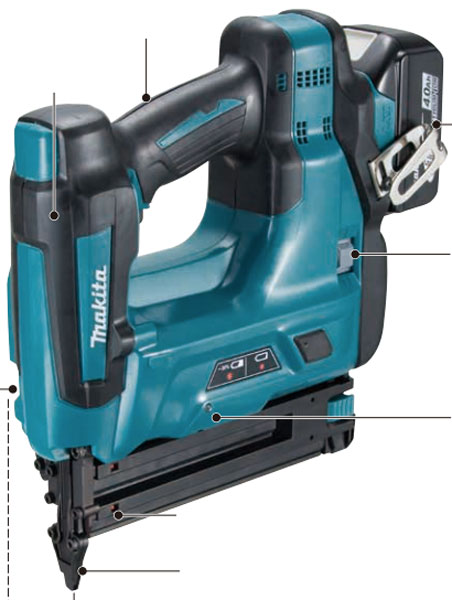 Ryobi has been expanding their line of 18V “Aistrike” cordless nailers, and Ridgid has come out with their Hyperdrive brushless nailers. There’s also the Senco Fusion line.

With larger sized nailers, users might be more forgiving of added size and bulk, in favor of the cordless vs. pneumatic convenience. But the performance also has to be there. With smaller nailer styles, size or performance differences are probably going to be more noticeable. What would you notice more – 20 ounces added to your compact cordless drill, or 20 ounces added to your cordless rotary hammer?

Would you rather Dewalt came out with whatever they can, now, or properly develop the best tool they can? Ideally, they would come out with the best tool possible right now, but it doesn’t look like that’s happening.

There are certain tools that Dewalt isn’t interested in coming out with. Engineers and product managers have been pretty clear about these things in the past. But with cordless nailers, I don’t think they’re holding back on smaller sizes because they want to. They’re simply waiting until they can come out with winning designs.

The Dewalt cordless miter saw is a good example of this. We saw evidence of a prototype in one of their promo YouTube videos years ago, and speculations popped up every so often since then. Finally, a couple of months ago, it became a reality, and it was worth the wait.

If you need a small gauge nailer now, it might not be worth waiting around for Dewalt. If smaller nailers are on their roadmap, it might be months if not years before we see them. I have a feeling that we’ll see new smaller sized Dewalt cordless nailers within the next 2 years, but that’s just what my gut – and no credible information – is telling me.

Unfortunately, or fortunately, depending on how much you want a smaller cordless nailer right now, this is one case where I don’t think Dewalt is simply saying “our users don’t want this.” I think they’re taking the time to do it right.