ToolGuyd > Power Tools > Cordless > Dewalt Cordless Stick and TIG Welder
If you buy something through our links, ToolGuyd might earn an affiliate commission. 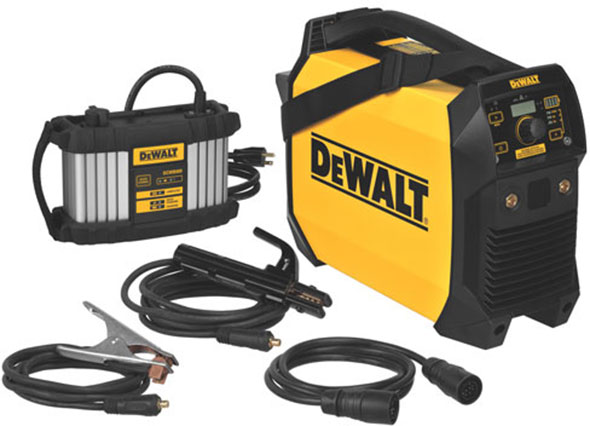 Earlier, we shared what we knew about the new Dewalt 20V Max brushless impact wrench that Mike sent in a tip about. That’s not all he told us about – he also pointed to a product page featuring the new Dewalt DCW100K welder.

Taking a quick look at Dewalt’s site made it clear that this is a portable and cordless welder! No, this isn’t a Dewalt 20V Max welder – it looks to have its own special internal battery pack and charger. Although, that would have been quite a feat, if Dewalt were able to somehow put together a 20V Max-powered handheld cordless welder. (Yes, Dewalt engineers, that’s a challenge!) Maybe they could do it with a couple of battery packs connected in series?

There’s not much information about the welder just yet, but here’s what we know so far:

The very brief power specs mention a hybrid mode, and that the portable Dewalt welder “welds off 120V AC in Hybrid Mode.” This is a little unclear, but it sounds like the battery is what always powers the welder, and that when you connect to AC power, all that’s doing is recharging and topping off the battery pack. There will likely be a flurry of details and more information as the welder’s launch date nears.

We don’t yet know anything about pricing or availability. One industrial supplier added the welder to a recent product flyer, but with blank pricing.

Stanley came out with new portable welders in recent months – a 100A stick welder, an 80A stick welder starter kit, and an 80A flux-cored welder. And so I suppose it’s no real surprise that Dewalt is jumping into the fray as well. I’m surprised, but I perhaps shouldn’t be.

This won’t be the first cordless welder on the market, as there have been a couple of models before, such as the discontinued Hobart Trek 180. That’s not to say that the new Dewalt welder won’t drum up excitement, because it will.

What do you think? Thoughts? Hopes? Concerns?

Thanks Mike for the tip!