ToolGuyd > New Tools > New Value-Priced Dewalt Tough System Tool Box
If you buy something through our links, ToolGuyd might earn an affiliate commission. 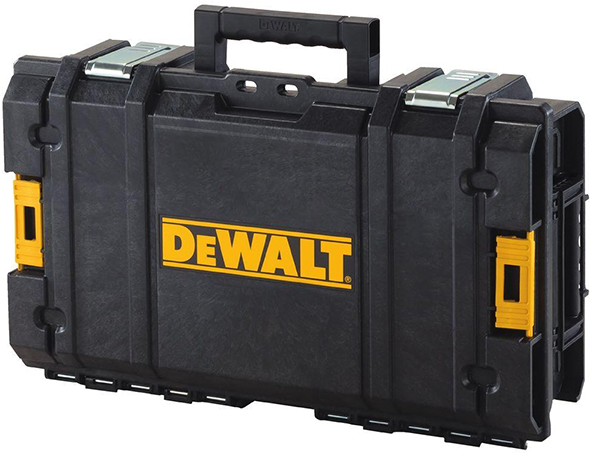 For one, there’s no top handle. And no air pressure equalization valve. And, as you’ll see from the following image, there’s no inner compartment separation, although there are some built-in and removable organizers.

Perhaps most importantly, you should notice that there’s no rubbery weather seal grommet, although it looks like there’s space for one.

Update: There IS a grommet. But no pressure equalization valve.

Home Depot’s product page is in conflict with the images, saying there IS an integrated IP65 water seal for protection of contents from weather conditions. 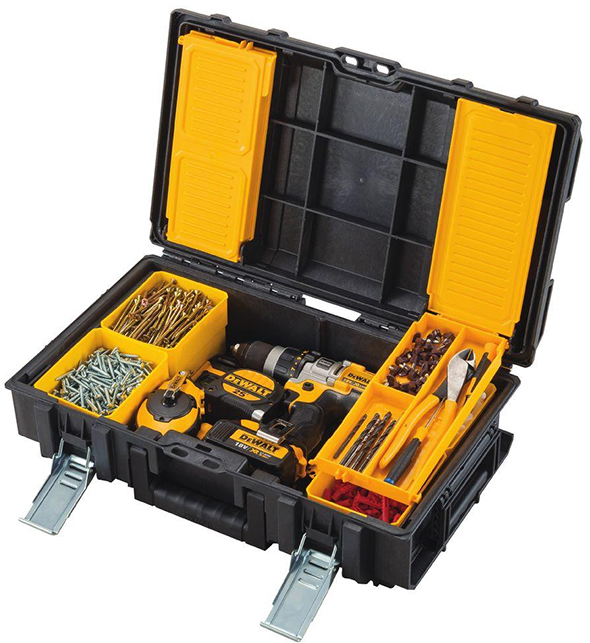 The DS130 is said, according to the Home Depot page, to have a 6.5″ height, but Dewalt lists the DS150 as having a 6″ height. I wouldn’t think this version to be taller. If anything, without having to make space for a top handle and inner compartment organizer separator, I’d expect it to be a hair shorter.

You get a lower price and some fewer features, but there are still some very good ones:

I’m not sure I like that lid organizer design. How do you open up the compartments when the lid is up and vertical, without stuff spilling out?

Correction: As per Schill’s comment below, it does look like the entire organize is hinged at the bottom. You swing it down, then lift the lid up. Thanks, Schill! 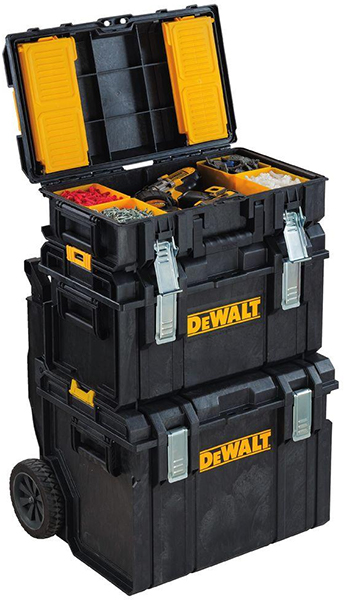 Thanks to Adam for the heads-up!

Why would Dewalt come out with a new lesser-featured and less expensive Tough System tool box? It’s not a no-frills box, but I can’t see any advantages over the small Tough System box, aside from the price. I suppose a pricing difference of $10 to $14 or so is significant in itself.

I already posted about how the new Dewalt Tough System rolling tool box could be an alternative to Ridgid’s Pro rolling Gear Cart. You can see more of the Ridgid Pro organizer, tool box, and gear cart in my review here. 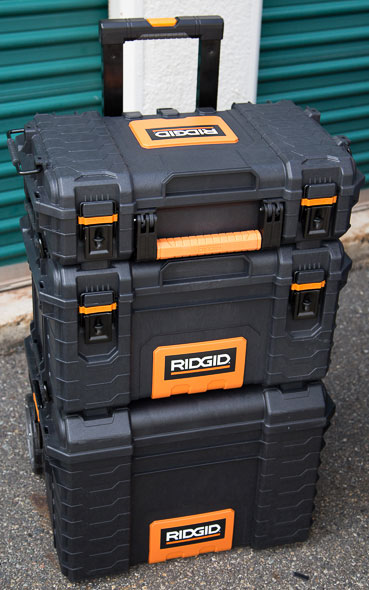 I also didn’t miss how Dewalt and Home Depot are marketing these new Tough System tool boxes as a 22-inch tool case, and a 22-inch

It surprises me to see Dewalt aiming to compete with Ridgid at this level, especially since they have a whole other line of smaller and less expensive modular tool storage options – Tstak.

Home Depot runs promos on the Ridgid Pro tool storage system every winter holiday season and I believe every Father’s Day as well. It’s usually buy all three, get the small box for free. So it ends up being $98 for the 3-box combo, as discussed in last year’s deal post.

It’ll be interesting to see what happens this year. Maybe there will be a similar Dewalt promo, where you can buy the wheeled tool box and a large Tough System cart and get the above-featured smaller tool box for free.

All this commentary aside, if this new box is as waterproof as the regular Tough System boxes, I’ll be extremely pleased. $31 is not a lot of money for what you get. I’ve bought plenty of small, large, and extra large Dewalt Tough System tool boxes, and always felt like I got my money’s worth.

Update: It is! Or at least it should be, thanks to the grommeted lid seal.

The wheeled cart looks interesting, and should please critics of the Tough System carrier’s pretty large size and heavy weight. But with that wheeled case, you lose some storage capacity due to the wheels, and it means you have to start taking an entire tool box stack apart when you want something from a lower box. Then again, if you keep your boxes in one staging area, you only need to stack and stack your boxes once or twice a day.

Oh, and you CAN use this individually. There’s no obligation to use the new Tough System tool box as part of a larger modular tool storage system. It is nice that it can be stacked in the same way as all other Tough System tool boxes, but the lack of a top handle will hamper things.

If you only want just one tool box of this size, I think the DS150 is a better option, thanks to its top handle. It does cost more, but you’ll soon forget about the extra $10 to $14. But if you go with this less expensive option, the lack of a top handle might plague you for its entire length of ownership.

But when paired with something like the wheeled box, especially if you perhaps want 2 of these instead of 1 plus a large box, the lack of a top handle becomes less important, and the pricing difference becomes more significant.

If you own any modular tool box system, from Dewalt, Ridgid, Bosch, Festool, or any other brand, or make use of individual tool boxes, how likely are you to give this new Tough System tool box a try?