ToolGuyd > Power Tools > Cordless > Dewalt’s Thermal Imaging Camera is a Bad Value
If you buy something through our links, ToolGuyd might earn an affiliate commission. 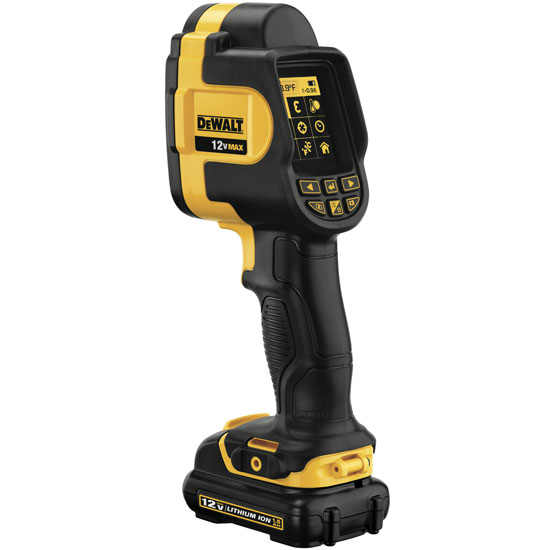 Earlier today I had a conversation with a UK professional who was trying to gauge whether the Dewalt DCT416 would be suitable for his needs.

Aside from trying to determine whether the Dewalt thermometer would be good for the reader’s needs, I spent some time thinking a lot about whether or not it was a good value or recommendable in general.

I was hoping you could help me with a bit of technical information as Dewalt’s own service was dire.

I am thinking of picking up Dewalt’s thermal imaging camera [DCT416] and wanted to know whether this would pick up individual pipes in underfloor heating?

The floor make up is the pipes sit in foam,  18mm chipboard above that then a thin laminate or a slightly thicker engineered board for premium apartments.

I can feel a gradual heat difference where the pipes are so I would hope these would be a lot clearer on the screen.

I hope to use it to mainly show customers that the heating works fine in their apartments (the switch from traditional wall mounted rads causes issues) and to also help pinpoint any potential leaks.

I did a quick Google image search and saw that it is possible to see thermal profiles of inner-floor heating pipes. The images show that thermal imaging cameras *should* do a good job of showing the gradual heating differences around the pipe locations.

However, I am not at all convinced that Dewalt’s imaging thermometer would be suitable for the task.

Dewalt’s DCT416 has a very low resolution sensor, which is why it’s marketed as an imaging thermometer and not as a thermal imaging camera.

I conveyed this to the reader and suggested he look at higher resolution thermal imaging cameras. There are building-inspection-specific models that might do a better job at imaging an entire floor, but he might see good results with an inexpensive entry-level model that’s meant for general purpose use.

I also suggested that he borrow or buy a thermal imager from a retailer with a lenient return policy. That’s really the best way to gauge if a thermal imaging camera is suitable for a given application.

I also asked him to check out the first sample image I took with the Dewalt thermal imager of my hand, and to then look at images taken with the Flir E4 and other higher resolution thermal imaging cameras. The Dewalt imager is great for general close-up diagnostics work, but its imaging quality and resolving ability is nowhere near that of other devices.

Since the release of Dewalt’s imaging thermometer, the market landscape has changed, but Dewalt’s pricing has not.

Last month, Fluke’s visual thermometers dropped in price. The VT02, which I believe to be comparable to the Dewalt model, is priced at ~$450, while the newer and upgraded VT04 is priced at ~$645 (price check via Amazon).

Dewalt’s 1-battery imaging thermometer kit is priced at $800 via Amazon.

Later this year, the Flir ONE smartphone-attached thermal imaging camera will further change the landscape. At that point, visual thermometers will probably be hard sells unless priced under $500-600.

My opinion is that the Dewalt kit would be much easier to recommend at $550, or even $650, and that at $800, their imaging thermometer/thermal imager is just not appropriately priced for what it offers. I believe that Dewalt should – and really needs to – reduce the price or release an updated model with improved features at the same price point.