ToolGuyd > Power Tools > Cordless > What’s the Point of a Dual-Trigger Cordless Band Saw?
If you buy something through our links, ToolGuyd might earn an affiliate commission. 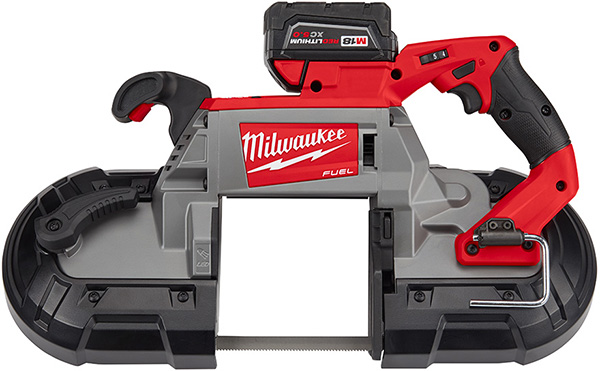 This saw features a 5″ x 5″ cutting capacity. Yesterday we talked about their 2829S compact band saw, which is available in standard and dual-trigger versions.

So, what’s the point of a dual-trigger cordless band saw?

Some cordless band saws are operated in the same manner as other cordless power tools. Depress the safety lock and squeeze the variable speed trigger. Dual-trigger cordless band saws, on the other hand – literally – require users to place both hands on the tool for operation. One hand activates the switch on the auxiliary handle and the other operates the main handle’s variable speed trigger.

In their press materials, Milwaukee says:

In response to calls from safety directors for band saws that include certain features, Milwaukee developed a dual-trigger system for our M18 product that meets their jobsite needs,” said Kevin Gee, Group Product Manager for Milwaukee Tool. “With the M18 FUEL Deep Cut Dual-Trigger Band Saw, the combination of the added trigger system and performance of the original M18 FUEL Deep Cut Band Saw results in a product that can be used to safely cut a variety of jobsite materials.

Got it? This is a safety feature that customers asked for.

Rosendin Electric is a large electrical contractor with more than 6,000 employees and estimated revenue of $2 Billion a year. Some time ago a reader commented or emailed with a link to a video discussing their appeal for a dual-trigger band saw solution. 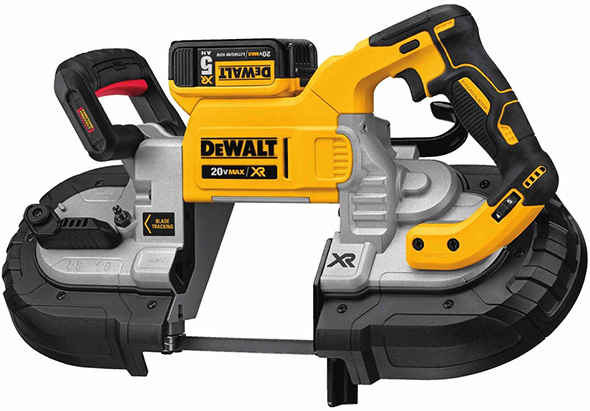 In a discussion video (embedded below), Mike Greenawalt, a Senior VP at Rosendin, says that they were looking for a solution to avoid the types of hand and wrist injuries resulting from the improper use of portable band saws. In the video, Greenawalt says that they requested this product from Dewalt, indicating that this was a user or manager-requested safety feature.

This makes reasonable sense to me. If I were a manager and some of my electricians or pipefitters were injuring themselves with portable band saws, I would see the appeal of band saws with dual-trigger switches.

With cutting tools, lacerations (or worse) are often the biggest safety hazards. In this case, with the Rosendin VP mentioning hand and wrist injuries, I wonder if users are injured by using larger band saws one-handed and losing control of the tools once the cut is completed. I could certainly envision a large tool swinging down following a cut, twisting the user’s hand or wrist in the process. Requiring two hands on the tool *should* give the user more support and control, and could potentially reduce certain injuries.

The Rosendin VP mentions injuries due to improper use, but doesn’t specify beyond that. Are these users untrained in the use of portable band saws, or taking shortcuts? Either way, it seems like they’re pleased with the availability of dual-trigger safety features.

The demand must have increased from there, because Milwaukee has also come out with dual trigger band saws.

If you don’t like the idea of a dual-trigger band saw, both Dewalt and Milwaukee continue to offer traditionally designed cordless band saws as well.

It’s also possible there are other injuries the dual-trigger system is intended to help prevent.

To me, it seems that this might not be the best tool for all users. In the Rosendin video, the VP mentions switch activation sequences aimed at preventing circumvention by creative users. If the dual-trigger switch is cumbersome to use, it might slow down and frustrate users who are more experienced and adherent to proper cordless band saw use.

I would imagine that individual users might see more appeal in the standard versions of these tools, but I can certainly see the appeal for larger organizations that have to pay insurance claims and make up for downtime whenever a worker is injured on the job.

If you were a purchasing manager at a large construction company, is this something you would equip your crews with?