ToolGuyd > Editorial > Field Trip: My Recent Visits to Home Depot, Lowe’s, and Harbor Freight (9/9/2019)
If you buy something through our links, ToolGuyd might earn an affiliate commission.

I started off my Monday with a trip to Home Depot. I bought a two-pack of Stanley hammers on Friday for $15, and last night I noticed the price had dropped to $10. So, I went in for a price-match, and I also needed to buy some more nails.

As an aside, I couldn’t fall asleep last night, and I found myself wondering about what I would say about that Stanley 2-pack of hammers. At $15 for the 2-pack, I’d instead recommend buying a similarly-styled value-priced hammer of your choosing and pairing it with a nail puller or pry bar. Or is it advantageous to have two hammers with different claw styles? But, I guess it’s a moot point, as $10 for two hammers is a hard value to beat.

I picked up some more hammers and pliers for expanded comparisons I have in the works.

There was a contractor looking for a metal-capped mallet. Unfortunately, they didn’t have one. I asked him if he checked the flooring section, but he had just been there.  There was a small Husky dead blow hammer, or a larger double-faced Vaughan rubber mallet, and he didn’t seem happy with either one.

This Nupla dead blow hammer on Amazon was probably what he wanted, or maybe this two-pounder.

It’s unfortunate that Home Depot didn’t have the tool he was looking for, but neither did Lowes or Harbor Freight. You know which store would have had it? Sears from a couple of years ago.

Overall, it was a good trip to Home Depot. I had an equally pleasant visit on Friday, but nothing noteworthy happened then. 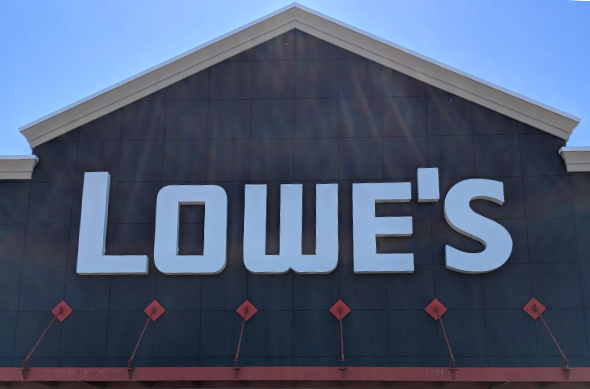 After my visit to Home Depot today, I was off to Lowes to pick up a Craftsman hammer. But first, I wanted to check out the pliers.

I wanted to get Craftsman 8-inch long nose pliers, but the website said there were 0 in-stock and that it was unavailable for in-store pickup. Okay, so it’s not in stock. At the store I found a peg full of them. They had so many of the pliers I wanted that some were stocked on the next peg as well. A pleasant surprise.

But then I went to find the Craftsman 16 oz hammer I wanted. I bought a 20 oz hammer the other day, but the website said they did have the 16 oz hammer at the location I was going to visit today. Great, right? Wrong. I couldn’t find it. 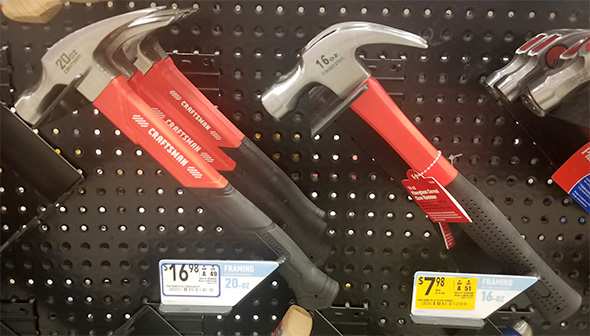 An associate tried to help me track down the Craftsman 16 oz claw hammer I wanted. We looked up top – nope, no unopened boxes of hammers there. The Lowes website said there were 11 tools in stock. Luckily, he found one in the row of 20 or 22 oz hammers. Hooray!

I went looking for a Craftsman hammer that Lowes said was in stock, and had trouble finding it, but had an easy time finding the pliers that their website said was out of stock and not available.

Another customer saw that I was holding a couple of items and told me they were clearancing out a bag full of hand tools for $100 near the front of the store. I thanked him and said I would check it out. I forgot to do so, since the interaction was before my long search for the Craftsman hammer, but it brings to mind my visit to a different Lowes store on Saturday. 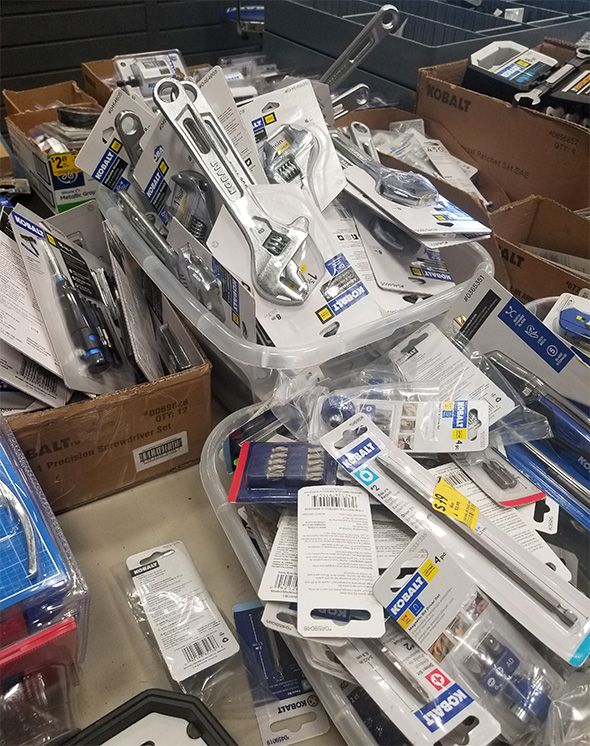 I had been picking up some hammers and pliers, for the same big comparison, and a Lowes associate pointed me towards a couple of tables near the pro section that was filled with tools. He told me “Craftsman is our brand now, and so there are a lot of Kobalt tools at 50% off.”

There’s the risk of mixing you up by talking about two visits to two different Lowes stores, but I do wish I only had to make one stop. But, at least I got the Craftsman pliers and hammer I wanted. 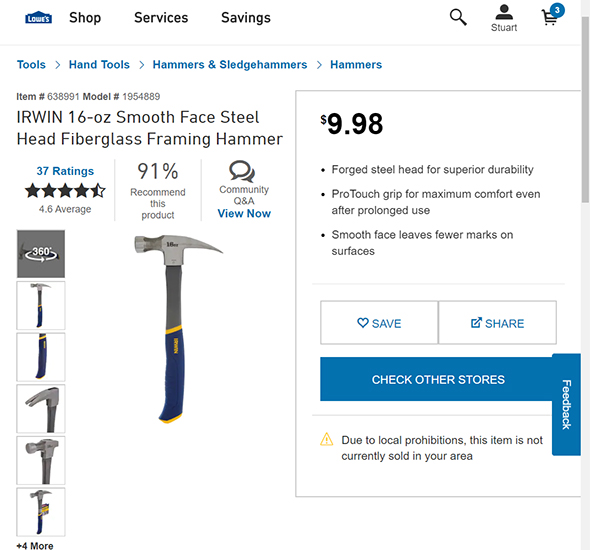 I couldn’t find an Irwin hammer, though. Why? Well, according to Lowes’ website, due to local prohibitions, this item is not currently sold in your area. Don’t worry, I was able to order one from Amazon, although at $2 more.

Oh, I almost forgot to mention – I was able to price-match a Corona bypass lopper with Amazon’s pricing. There wasn’t anyone working the assisted checkouts, so I waited to ask an associate at the self-checkout. They sent me to customer service who had to look at the tool, my phone, and then their computer, but I saved nearly $12. This is the kind of tool that probably wouldn’t have traveled well, and so I was happy to buy it in-person and get the lower price.

And then, there was Harbor Freight. I went to one store on Friday and another store location today.

It was the trip to Harbor Freight the other day that lit a fire under me to do some hand tool comparisons. I went to the store to pick up a Hercules 12V drill/driver, because I think it would have made for a good comparison against Skil’s offering. The Hercules 12V cordless power tools launched in February, and I wanted to check it out now firsthand.

I checked out the very limited selection of Icon tools, especially the breaker bars. *Expletive in a good way*, those sure were some good-looking tools. I’m going to have to keep my eye on them.

Then I checked out the Quinn screwdrivers and picked up a pair. I also picked up some Doyle and Quinn pliers. *Expletive in a bad way*, I was left with some pretty harsh first-impressions. But, the pliers’ packaging could betray what the jaws really look like. 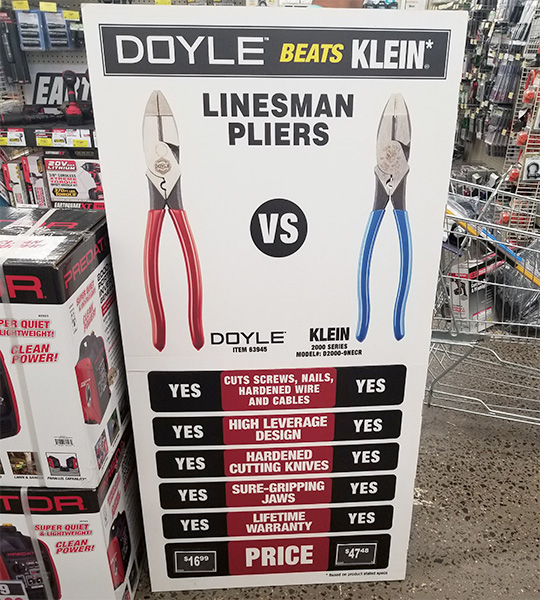 I asked myself “Hmm, how well do they really compare with Klein?” That’s what kicked off a pliers shopping spree  for comparison purposes, and Friday’s unplanned visit to Home Depot.

Surprisingly, my visits to Harbor Freight were extremely pleasant. This was only my third or fourth visit to any Harbor Freight store. I don’t expect to be a regular there, but I do know that I won’t wait two years before going back.

When I spoke to the VP of Harbor Freight’s product development department, he told me that big changes were coming. It has been nearly two years, and so I was curious to see if there were any changes to the store. I didn’t spot major changes although some of their new products are really shattering my expectations, most notably their tool storage carts and the Icon tools despite there only being a couple of new tools so far.

The staff at Harbor Freight were pleasant, friendly, and seemed to be genuinely happy and eager to help. It was wonderful.

I used two coupons at today’s visit, one for a discount on a hammer, and the 20% off coupon. “Would you also like to use the coupon for the free flashlight?”

I went to Home Depot and Harbor Freight on Friday afternoon, Lowes on Saturday morning, and different locations of each store on Monday morning. At these times, Harbor Freight’s tool aisles seemed to be busier.

If you ask me which store I prefer, it’s Home Depot, partly because several stores are closer and quicker for me to get to, but also because I like their brand selection better. But, all of these 6 visits were pleasant, thanks to stocked shelves, clean stores, and courteous staff.

Next up, I have some hand tools to start testing.

One of the Design Philosophies Behind Milwaukee M12 Cordless Power Tools