ToolGuyd > Hand Tools > Mechanics' Tools > Husky 60pc Universal Mechanics Tool Set with 100-Position Ratchets and Universal Sockets
If you buy something through our links, ToolGuyd might earn an affiliate commission. 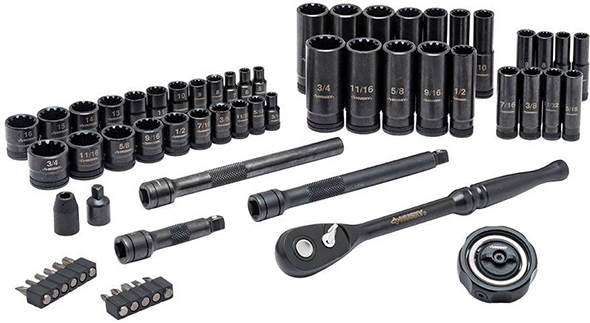 Home Depot sent over a Husky 60pc “Universal” mechanics tool set for review. We’re currently in a paid partnership with Home Depot, and this is one of the tools they sent over this quarter for review consideration.

The star of the show is their 100-position ratchet and gimbal palm ratchet, which I’ve used before with great experiences. I actually really, really like both drive tools, and don’t think I’ve seen anything better for the money.

100-position? This means that the tools can swing in tight spaces, with as little as 3.6° arc. I haven’t taken the ratchets apart yet, but assume there’s a dual-pawl mechanism similar to Gearwrench’s 120XP 120-position ratchets, giving them motion equivalent to that of 100-tooth ratchets.

This set comes with the 3/8″ ratchet, 3/8″ swiveling palm ratchet, extensions, adapters, a selection of 1/4″ and 3/8″ sockets, and some screwdriver bits.

I have yet to find universal-fit sockets that I like better than 6pt sockets, but they have their benefits. If I had my way, I’d keep a set of 6pt sockets, and a set of universal-style sockets, which do a better job of taking the place of 12pt sockets.

Overall, I think this is a very good compact socket set. Years ago, I bought a Craftsman 94pc socket set for around the same price ($60), and build upon it. If I were starting out with decent mechanics tools today on the budget I had 10-15 years ago, I think this set would be at the top of my list.

It gives you a great selection of sockets, 2 good quality ratcheting tools, and a few extra bits that come in handy. There’s very little bloat, meaning that 60-piece count isn’t inflated with lots of unneeded tools, such as hex keys.

This set doesn’t give you everything you will ever need, but it’s a great start.

So far, I’ve used it on a couple of assembly projects – no auto maintenance stuff – involving both drive tools, a couple of standard socket sizes, one of the deep sockets, and the screwdriver bit holder with a 3rd party hex bit.

The only complaint I have so far is about the configuration. I would have liked to have seen a 1/4″ ratchet in the mix, although the 3/8″ ratchet and gimbal ratchet work adequately with the included adapter.

Overall, I’m pleased as punch with this set. The next time someone asks for a recommendation for a basic ratchet socket set for general home or auto use, this will be at the top of my list. It has a good selection of good tools at a good price.

Thank you to Home Depot for supplying the review sample unconditionally.

I mentioned at the start that we’re currently in a paid partnership with Home Depot. That will involve sponsored projects and reader-givebacks such as giveaways. In other words, this review isn’t sponsored in any way, other than the product being supplied to us at no cost.

Speaking of giveaways, would you be more interested in winning a ratchet, gimbal ratchet, or everything that’s part of this 60pc set?