ToolGuyd > Tool Reviews > Husky Portable Workbench Review
If you buy something through our links, ToolGuyd might earn an affiliate commission. 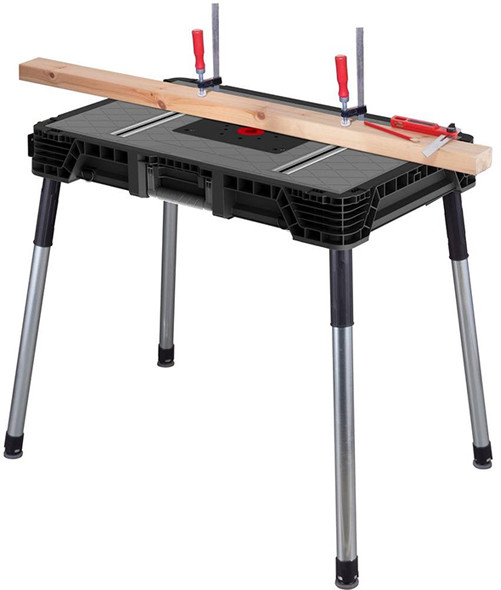 Husky came out with a new portable clamping workbench around a year and a half ago. I’ve had a test sample around here for much of that time, using it on a few occasions.

When we had a countertop cut for the kitchen window sill, the workers asked for a sawhorse, but I gave them this and they seemed quite pleased with the stability.

The router table insert? Never used it. The clamping slots? I have some clamps around here that might work with it, but I never used it. I imagine you could also fashion some hold-downs using hex head screws.

But for simple work support, I LOVE this Husky portable workbench. I passed it along yesterday to an in-law who will use it for a project and then pass it to a shop teacher.

While going over the features, I remembered the 2 big reasons why I like it so much. 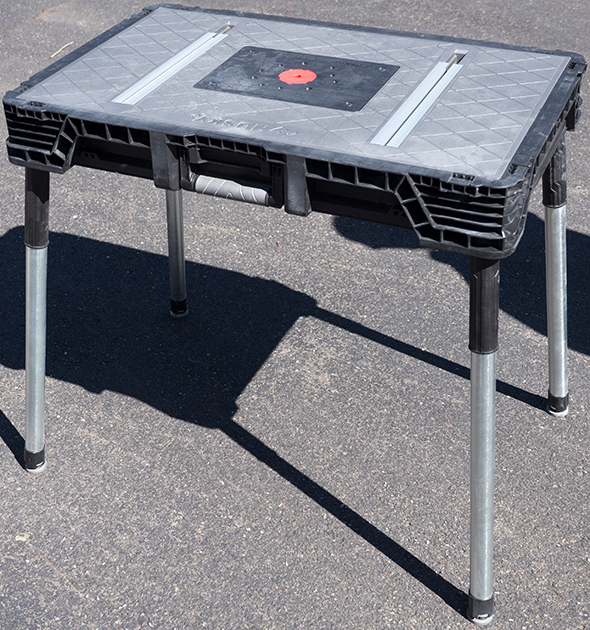 What’s the difference? By sturdy, I refer to its 1500 lb load rating and its ability to stand strong and secure. And by stable, I refer to how the legs will swivel and self-level.

Maybe it’s the same thing, but I’ve seen sturdy workbenches that are anything but stable on challenging floors or ground.

I set it up on the driveway, and it was rock-solid despite the uneven ground. 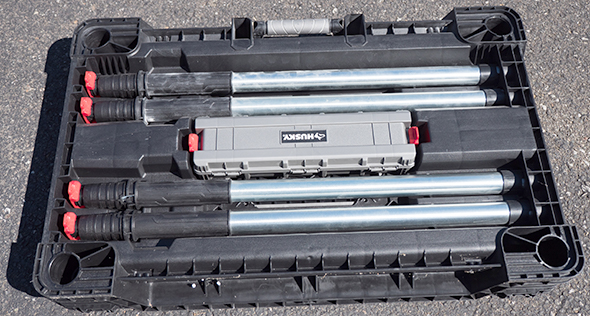 Part of the stability, I feel, comes from the removable legs. They store neatly in the underside of the workbench and are easy to attach and remove.

The tubular legs seem sturdier than those on any folding portable workbench I’ve used before, except perhaps my father’s older Black & Decker Workmate.

I remember when he bought it at a Black & Decker factory outlet (now all closed). More recent models that I’ve seen in stores have thinner and flimsy-feeling legs. My dad’s Workmate can be heavy to carry for long distances, and it was a bear to carry to their backyard from the basement, but it’s a champ. Sorry, I digress. 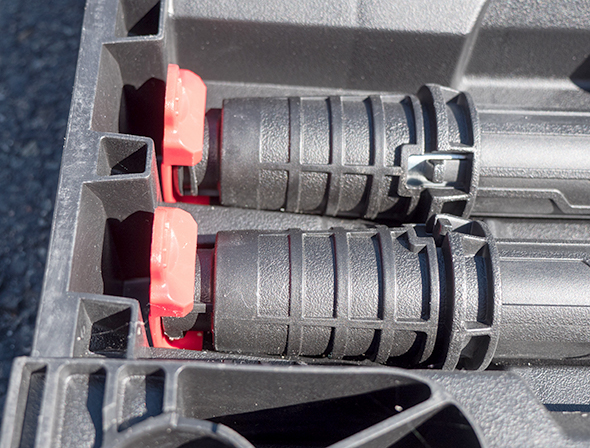 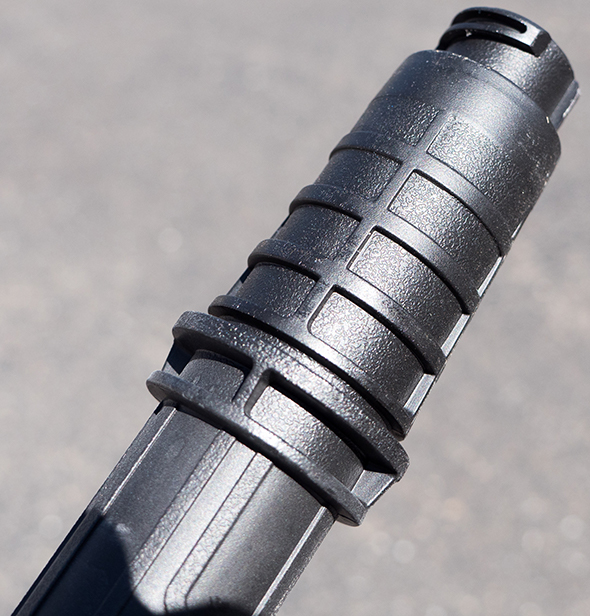 The mounting design is quick and easy, requiring no instructions. Stick the legs into holes at each corner of the workbench, and twist. I suppose there’s a slight “push down” motion too.

The legs seat themselves and lock in tightly.

I had no problem locking them in yesterday, in 20 degree weather. Removing them is easy too, and was not uncomfortable even though I wasn’t wearing gloves. One of the legs turned fine but stuck a little. A gentle tug and it popped right out. 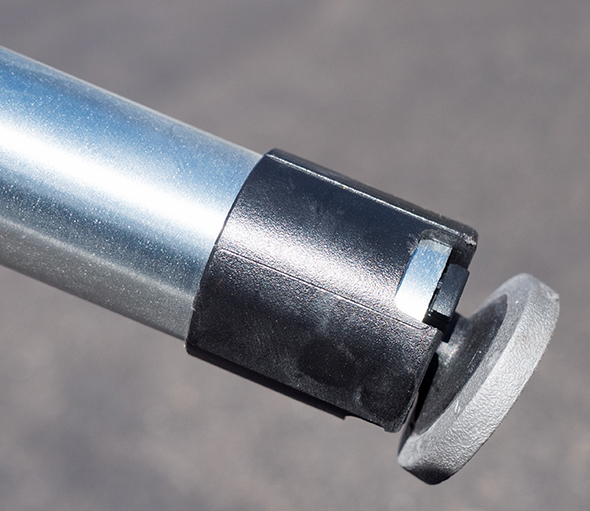 Here is one of the swivelling leveling feet.

You’d think that a swivelling foot would contribute to rocking, but they don’t.

I’m sorry, but I don’t recall if any of the feet can extend to better level the table on really uneven ground. No matter where I set it down, it was always rock-solid and required no shims or adjustment. 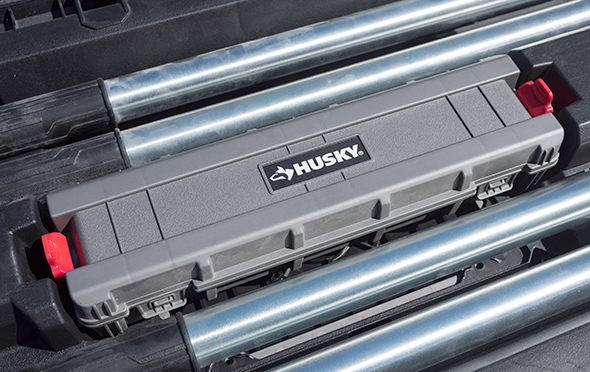 There’s also a small parts box that docks underneath the benchtop in the center. Inside are accessories for the router table insert, and also metal brackets that attach to the workbench sides for supporting 2x4s.

The 2x4s can be supported for cutting, or to create a larger tabletop surface, such as if you wanted outriggers for a miter saw.

This is embarrassing, but I didn’t think to measure the tabletop dimensions before sending the workbench on its way. Home Depot markets it as a “3 ft x 1.8 ft” bench, and the specs say it’s 34.65″ long, 21.65″ wide, and 32″ tall. Its footprint is going to be slightly wider since the legs angle outwards. It weighs just under 20 lbs.

If you don’t want to use the router table insert, don’t. I ignored it and it never got in the way.

This Husky workbench is made from plastic, metal (legs), and a whole lot of thoughtful engineering. It’s quick to set up and take down, it’s pretty light and portable, and it transports nicely.

(Clamps are not included.)

I do own a Festool MFT/3 ($560 for just the table, more for the full package), and it’s almost rickety in comparison. One of these days I might order stabilizer legs, but they’re priced at $80, 3 cents more than the price of this Husky workbench. I mention the MFT/3 unfairly, since it shines when used with Festool guide rails and tools. But as a work platform, this Husky portable workbench is more stable.

Thank you to Husky and Home Depot for providing the review sample unconditionally.