ToolGuyd > Editorial > I Bought a Gorilla Carts Utility Cart, but 2 of 2 had Busted Wheels
If you buy something through our links, ToolGuyd might earn an affiliate commission. 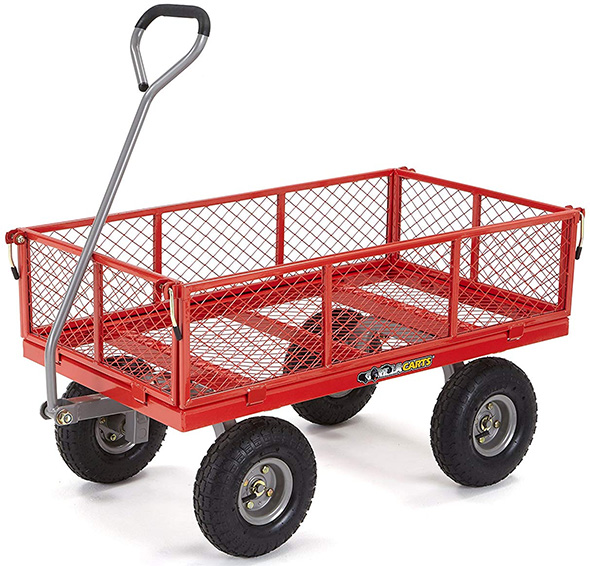 A few months ago, I asked for your opinions on garden carts. Based on your feedback, I made my decision and went with a Gorilla Carts steel utility cart, GOR800-COM, with removable sides and 800 lb weight capacity.

I went with this model because it’s larger and sturdier than the lower models, it has a loop handle and not a tractor-compatible 2-in-1 handle that I would only ever use handheld, and because I could always add a dumping bin of some kind of need-be. The steel platform seems more useful.

I’ve read complaints about pneumatic tires on all kinds of Gorilla Carts. Most complaints are that they go flat, and some recommended no-flat tire replacements.

Okay, I was prepared for that eventuality.

I ordered the cart from Amazon, and it arrived two days later. I marked it as a “gift” so that it would be enclosed in its own box, which I have found can give some added protection to items that would otherwise ship in their own boxes.

I opened it up, found small metal beads spilling out. One or more of the wheels’ bearings had been destroyed. I didn’t even bother assembling it. The garden cart wouldn’t work out of the box because the wheel bearings were busted, so I packed it up and requested a replacement from Amazon.

The replacement arrived today. It was laying down flat, and as soon as I picked it up, it made a rain-stick sound. Uh-oh. But maybe it’s something else?

I opened up the outer box, and saw dozens of teeny tiny ball bearings sticking to the tape of the product packaging, indicating one or more busted wheels – again.

Needless to say, it’ll be on its way back to Amazon this afternoon.

On one hand, things like this happen. On the other hand, 2 out of 2 carts that won’t work out of the box because of damaged or defective wheel bearings?

I can understand upgrading the wheels because the cheap pneumatic wheels run flat every few days. And I can be understanding about a rare case of defective wheel bearings. But boy is this a sour experience.

There aren’t any other user reviews complaining about the same issue, so maybe it’s a fluke occurrence that just happened to hit me twice, or maybe they have a bad batch of wheels or bearings.

So, now what? Maybe I’ll try again in the spring, but only if I can plan to wait for replacement parts. Or maybe I’ll try another brand. All I know is that right now I feel burned that 2 for 2, I ended up with carts that wouldn’t be usable out of the box.

I should have taken a photo, but with the first box, the bearing shaft looked dented a little. What I’m thinking is that insufficient packaging or attention to packing led to jostling which bent the bearing and liberated the balls inside. I tried to move it, but it had been seized, possibly due to being bent a little.

More Info(The model I bought and returned, via Amazon)

What would you do in a situation like this?